Decades of sprawl. Burdensome regulations that discourage investment in historic, neighborhoods. Rising property taxes and decreasing levels of municipal services. Increasingly fragile cities that must manage escalating demands on shrinking resources.These challenges – and a host of possible responses – will be the focus of BOOTSTRAP CITY: THE CASE FOR AGILITY, a series of three public lectures held over consecutive nights from April 22 – 24.

The first of these, Charles Marohn’s “Curbside Chat” discusses the financial health of urban places and addresses hard questions like: “Why are our cities and towns so short of resources despite decades of robust growth?” and “What do we do now that the economy has changed so dramatically?”

As you remember, we posted Mr. Marohn’s observations about and recommendations in late 2010 for Memphis here and here.  Since then, we’ve posted some of his videos and some of his commentaries on the Ponzi scheme that is suburban development.  In other words, we are strong admirers for Mr. Marohn and if you care to hear smart thinking about the future of Memphis, we urge you to turn out to hear his presentation from 6:30-8:30 as the Boot Camp kicks off April 22 at the High Point Ballroom, 1 Commerce Street in the Pinch District.

And, if you’re up for continuing to participation in some of the most provocative discussions about cities and the forces that drive success, mark your calendars for April 23 and 24 too.

From 6:30 – 8:30 on April 23, the second presentation will be Mike Lydon’s “Changing the Culture of a City” and it will explore the power and potential of creative placemaking and tactical urbanism, movements that are driving the emerging DIY movement in Memphis and driving grassroots change in making tangible improvements and alterations to the public realm, even without – sometimes especially without – local government’s permission.

Finally, at the same time and the same place on April 24, the third and final of these seminal presentations, Joe Minicozzi’s “How We Measure the City,” examines how different kinds of development patterns affect municipal coffers and ensuring that the public and private sectors work together to cultivate the most productive aspects of their communities. 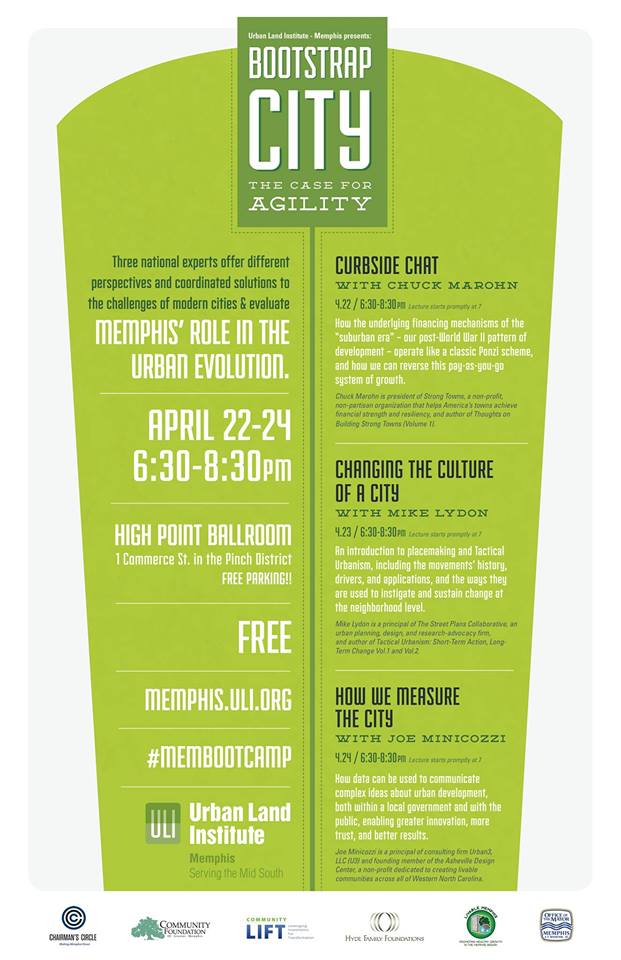