Searching for TDZ Headlines Rather Than TDZ Facts 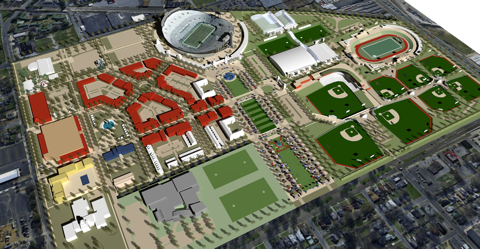 There is an unfortunate narrative that emerges every now and again in Shelby County Government whenever a project whose benefits accrue to Memphis comes up.

The latest example was Shelby County Commissioner Steve Basar’s search for headlines before searching for the facts about the Tourism Development Zone proposed for the redevelopment of the Fairgrounds into a sportsplex and urban village.

Mr. Basar began by admitting that he was unaware of the facts, but nonetheless, offered up misinformation, insinuations, and red herrings at a board of commissioners’ committee meeting.  We understand that the TDZ law is complex, but rather than opportunism, his contribution to a serious policy discussion would have focused on factual information and a complete framework.

It’s the kind of questioning that feeds a perception that Memphis’ future is low on the list of county priorities.  In this case, the effort was put into raising suggestive questions when the answers were easily available.

First and foremost, his premise about school funding was faulty or incomplete from several points of view and feeds continued misunderstandings about Tourism Development Zones.

One oft-stated assumption about the TDZ is that all sales taxes are used to pay for the project being funded by it.  That’s not the case.  All current sales taxes being paid to the state, city, and schools on the day the TDZ is officially established will continue to go to each of those respective sources.

Another common comment is that once the TDZ sales tax baseline is set, all future sales taxes goes only to the Fairgrounds redevelopment.  That too is not the case.  A baseline for current sales taxes will be established, and after that is done, it is the incremental increase in sales taxes that are captured within the TDZ for the project.

In other words, contrary to some of Mr. Basar’s comments, local option sales taxes to City of Memphis and Shelby County Schools will continue to increase in the TDZ after it is created.

Another suggestion that’s been made is that all of the sales taxes in the revived Overton Square will be collected to pay for the Fairgrounds.  There is a widespread assumption that this amounts to millions of dollars in local option sales taxes that don’t go to schools.  Actually, it amounts to about $175,000 today (but by the time the TDZ baseline is set, Overton Square may be fully leased, and if it is, it will amount to much less).  (It’s also worth noting that state law backs out .5 percent of its sales tax rate as its commitment to education funding.)

Finally, there is the suggestion that local option sales taxes should be exempt from TDZ collections, and while that is a worthy policy discussion, the fact is that the state TDZ  law – affirmed by a November 24, 2009, opinion by the Tennessee Attorney General – forbids it.  That said, as we pointed out earlier, the yearly adjustment in the baseline will indeed produce new revenues for schools and city government.

We appreciate Mr. Basar’s concern for school funding, but if his goal is to be a protector of school funds, a better use of this time would have been to convince his colleagues on the board of commissioners to fully fund Shelby County Schools or he could work for schools to be held completely harmless when tax waivers (PILOTs) are approved.  That change in PILOTs would produce free up about $10-12 million in funding for schools.

By the way, the Fairgrounds development includes a new $3.2 million gymnasium for Fairview School, and the new sports facilities and fields gives Shelby County Schools the opportunity to move its games and tournaments from ragged, inconsistent school facilities to the new sportsplex.  Between the debt service for a new gymnasium  – about $210,000 – and access to the new facilities, it seems to us that Shelby County Schools – the subject of Mr. Basar’s concern – is getting valuable consideration with the new Fairgrounds development.

For example, the off-site local option sales taxes that are earmarked for the Fairgrounds rather than city government amounts to about $345,000.  But if there was not a TDZ, City of Memphis would have to pay the debt service on the $37 million that has been spent on Tiger Lane, ADA improvements to the stadium, and new turf, lighting, and sound at the stadium.  That debt service would be about $2.4 million, which means that the TDZ leaves City of Memphis about $2 million a year to the good.

More than anything, the opportunity to realize a 30-year-old vision to participate in the $8 billion sports tourism industry and to pay more than 75 percent of the costs with Tennessee sales taxes, it seems too important an opportunity to pass up, because normally, of the sales taxes collected in Memphis, only about 25 percent of the sales taxes that we send to Nashville ever find their way back here.  Instead, they are spent on projects all across Tennessee.

We’re not suggesting that Mr. Basar should genuflect to our point of view, but we are suggesting that when you, as a responsible elected official, raise an issue, it should be after you have conducted the due diligence to determine the facts, the pros and cons, and an understanding of the various financial components of the project.