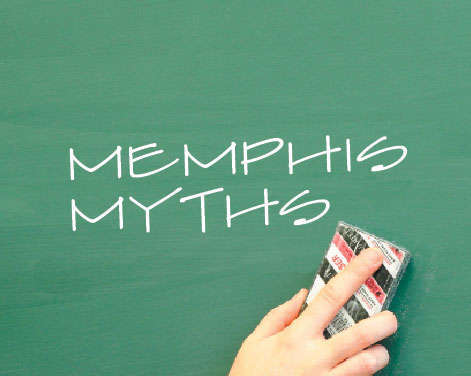 We all know about mythic Memphis.  Our most famous export is mythic music that changed the world, and our most famous entrepreneurial breakthroughs have attained mythological status, changing the way the way the world works and plays and one even defined modern global commerce.

And yet, there are other myths that dominate thinking in the Memphis region, and here are just a few of them:

City of Memphis is too wasteful and corrupt.

City government delivers its services on a per capita basis cheaper than Shelby County, Collierville, Millington, and Germantown governments.  And it’s done it despite increasing its land area and reducing its densities.  Most of all, City of Memphis has done it while continuing to pay legacy costs incurred for the infrastructure for people who have moved outside Memphis.

Memphis is dangerous and crime-ridden.

Memphis has seen dramatic decreases in crime, but here’s the truth: all of us know which parts of Memphis are risky and if we don’t go there, our risks as a victim of violence are minimal.  The high crime areas unsurprisingly coincide with maps of Memphis poverty, and if suburbanites want to attack crime, they should roll up their sleeves to improve neighborhoods where kids are taught the places to hide when gunfire breaks out and demand change from local elected officials.

Memphis teachers are no good.

The top schools in the former city school district are a match for the top schools in Shelby County Schools, but here’s the big difference: city school teachers are teaching moving targets. Each year, roughly 15 percent of city students moved, disrupting learning and creating toxic stress that has a negative impact on brain development.  The majority of Memphis students are dealing with a web of issues that teachers are addressing every day while suburban schools prove conclusively that socio-economic status is the greatest single determinant on student achievement.

Memphians are poor and uneducated.

The number of people living in poverty in Memphis has been about the same since 1980 (a fact which does not diminish the need to address the city’s most malignant problem), but for every person living under the poverty line, there are three who are not.  In terms of educational attainment, Memphis’s numbers are better than the MSA’s.  As for the poverty rate, it’s the high rate outside Memphis that forces the Memphis MSA into the top five.  Memphis on its own is not in the top 10 for highest poverty rate.

Memphis remains the economic and job center for the entire region, and with more than 75% of the people in the suburban towns commuting to jobs outside their borders, the health of Memphis should be uppermost in their minds, because so goes Memphis, so goes their paychecks.

Memphis is the next Detroit.

We have no patience with this oft-made derogatory(not to mention racially-charged) comment.  Memphis’ percentage of people with college degrees is two times Detroit, Memphis has 40% more people in the labor force, the poverty rate in Memphis is 30% lower and household income is about 25% higher, the number of vacant housing in Memphis is about half of Detroit’s  (although Memphis is almost three times larger in land area), Detroit’s city budget is three times bigger than Memphis, and its debt is 20 times bigger than Memphis.

Memphis is a backwater city.

We are home to FedEx, one of the top 10 most respected companies in the world and global commerce was invented by it.  In Sir Peter Hall’s Cities in Civilization, he cites 16 cities that shaped the world.  Memphis is on the list, along with Athens, Vienna, Tokyo, Paris, Florence, Berlin, Rome, New York, London, San Francisco, and Stockholm.   It’s easier to say we have backwater suburbs than to say we are a backwater city.

Hall writes: “a remarkable event in human history took place: cultural creativity and technological innovation were massively fused…The special reputation of the place, free and wide open, helped it all to happen…the music of an underclass could literally become the music of the world…This was a revolution in attitudes and behavior, as profound as anything that has happened in the last 200 years.”

All of us hear these myths, and it’s time to quit being polite and tell people they don’t know what they’re talking about.  There is much that we need to get right in Memphis, both the city and the region, but we need to build that future on the facts rather than fictions about the city.