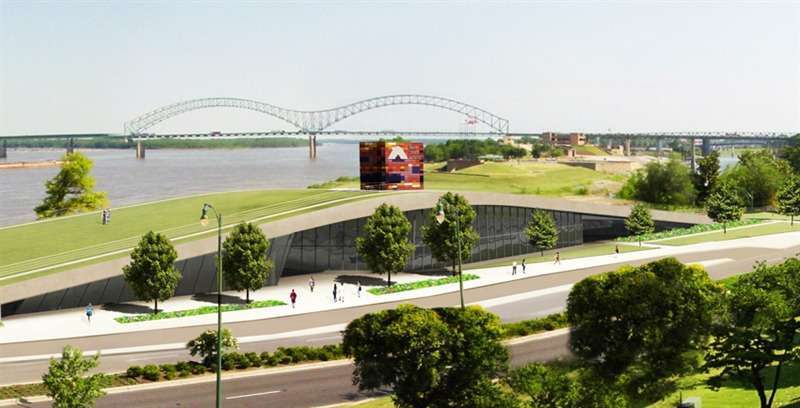 While we are disappointed in the poor design decisions that have marked Beale Street Landing as of late, we want to make it clear that we aren’t interested in joining those who look for any reason to dismiss and vilify the project in its entirety (none of these applies to the commenters to our recent post and their opinions should be listened to by RDC officials). From our point of view, those who call it a “boat dock” simply demonstrate a lack of understanding about what makes cities work, because Beale Street Landing creates a center of gravity, a sense of arrival, a hub of activity that has long been needed for our riverfront to keep pace with the major investments being made by smart cities around the world in their own riverfronts.

It also becomes a bookend to the redevelopment of The Pyramid into a Bass Pro Shops store and attraction (although we’ve noticed that some of the same people who call Beale Street Landing a boat dock call The Pyramid a “bait shop,” illustrating again the tendency to opt for cleverness over reality).  The riverfront has needed more vibrancy and activity for decades, and these two elements are opportunities to achieve that.  It was in recognition of this fact that Memphis Mayor A C Wharton brought Jeff Speck to Memphis to provide him with recommendations for maximizing the impact of these two projects.

We wish these poor design decisions hadn’t been made, as we pointed out in Monday’s post, but Beale Street Landing is still needed and our opinion has not changed on that fact since we first wrote about in June 9, 2006.  Here’s that post:

Located as we are near the foot of Union Avenue, we have a front row seat as witnesses for the consternation and confusion felt by visitors when they wander down from the Peabody Hotel and nearby restaurants to experience the nation’s mightiest river.

Down the hill they walk, every day, excited and expectant for their first view of Old Man River. And yet, when they arrive, their attention on the river is short-lived. Almost immediately, they look up and down the riverfront for the grand public promenade that they assume exists there somewhere. Normally, they wander aimlessly along the riverwalk, unable to even see a place where they can buy ice cream or a soft drink.

That’s why we were so pleased when Memphis City Council approved $4.8 million to get Beale Street Landing under way. Finally, our local equivalent of Everest will have the great public place that it deserves. More importantly, we will have the linkage that connects our riverfront to our downtown and turns the city around so that it faces the water.

It sometimes seems that anything the Riverfront Development Corporation touches is immediately opposed by some people, but surely Beale Street Landing is something all of us can support. That’s because the benefits of the project touch so many needs that we have. Best of all, it would be a direct attack on the image of Memphis as a slow-moving, sleepy river town.

If there is one thing that we can do downtown that would make it more successful, it is to make it more vibrant. Beale Street Landing is a major step in the right direction with its modern docking facility, its grand civic plaza, and its dramatic overlook and sense of arrival.

The $29 million ($10 million from federal and state funds), five-acre project would be located at the terminus of legendary Beale Street, stitching together downtown’s two dominant legends into a single fabric. The consensus that emerged from the public meetings for the Riverfront Master Plan was that Beale Street Landing needs to be a top priority, and that sense of urgency was endorsed by the Urban Land Institute in its subsequent review.

The design for Beale Street Landing was chosen from 170 submissions in our community’s first international design competition. Managed by the UrbanArt Commission, Memphis Chapter of the American Institute of Architects and the RDC, the jury selected Buenos Aires architects Javier Rivarola, Gustavo Trosman and Richardo Norton.

As designed, the project features a number of landscaped “pods” that float over the riverfront, connected by pedestrian bridges and joined to a docking area for the large riverboats that moor here almost weekly and smaller boats that populate the river. The docking area in particular responds to a need for downtown, where we haven’t moved too far away from the old days when a riverboat was tied to a tree on the bluffs.

Of course, in the end, Beale Street Landing shouldn’t be built for visitors or tour boats. It should be built for those of us who live here, answering the need for the spectacular civic space that weaves together the urban fabric and using the most iconic asset of our past to create a new iconic image for the future.

Most encouraging of all is that the project turns our attention to the design details of our city, a subject too often neglected on our civic agenda. Perhaps, just perhaps, Beale Street Landing could even be inspiration for a new design ethos for Memphis.

If we have learned anything from the lessons of other cities, it is that places are complex organisms made up of interrelated activities; that projects work best when they connect to a city’s unique character, and most of all, they are about creating a place, not a plan.

Great cities around the world are reclaiming their riverfronts and capitalizing in powerful ways on the bonds between their people and their rivers. No city has more impressive ingredients to work with than Memphis, and Beale Street Landing is the precisely the kind of project that indicates to us what our real potential is.

While it is tempting to justify the project on the basis of economic impact, that would really miss the point. Most of all, grand public spaces like this make cities more livable, they are the physical embodiment of what cities are all about and they create a sense of place like nothing else.

That’s why Beale Street Landing is anything but a frill. It is a core investment in the kind of vibrant, appealing, connected, grand public spaces that we need. After all, isn’t beauty the most important public service of all?

Is There a Smart Way for Cities to Privatize Parking?