Putting a Bow on Memphis’s Gritty Gift to Talented Workers 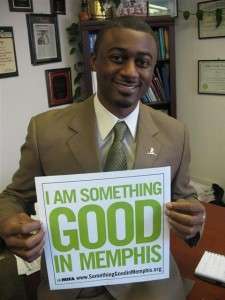 Memphis is struggling, our challenges are daunting, and maybe, just maybe, we should acknowledge those facts in making a pitch for the 25-34 year-old college-educated talent that we need to compete in today’s economy.

It’s a compelling offer that we have to make.  A sizable number of this demographic are not only looking for jobs but for ways that they can do something meaningful and that they can contribute substantively to make the world better.  It’s hard to think of a community that would more appreciate their contributions or need them more than ours

There are impressive programs already under way in Memphis that are speaking to the desire of this generation to find fulfillment and there are program creating roots that anchor young leaders to our community.  There is the outstanding Summer Experience of the New Memphis Institute, faith-based programs that seem to be sprouting on every corner, and secular programs hammering home the message that these highly coveted workers can find special meaning here.

Here’s the thing: we now need our elected officials and our economic development officials to move this message from below the radar and plant it firmly in the center of our talent strategies.

It was the opportunity to do something special that attracted thousands to rebuild New Orleans.  Yes, there was a natural disaster but more than that, New Orleans was open and honest about how much they needed these people to help them reinvent a city.  In support of this call for help, New Orleans was intentional in setting up special programs that rewarded good ideas with small grants, that responded to the priorities of “young professionals,” and that integrated them into civic affairs in direct ways.

But it need not require a natural disaster for Memphis to do the same.  We can do it by getting deadly serious about talent strategies and by responding to a large part of this generation’s interest in having lives of purpose.   After all, the fact is that they can choose to live in San Francisco and after 30 years, if they are involved and determined, they can move the needle from 9.77 to 9.78.  Here, there is opportunity plug and play, and in so doing, to move the needle significantly and at a much younger age.

It is what Commercial Appeal columnist Geoff Calkins, in a presentation to Leadership Memphis several years ago, called “Memphis’s special gift.” “Sometimes in the midst of the drumbeat of fear and negativism here, I have to stop and remind myself what I love about Memphis: the opportunity is there for all of us to shape Memphis,” he said.  “Every one of us can make a difference.  It’s not that we have an obligation.  It’s a gift.  It’s an opportunity that doesn’t exist in other places.  You can easily get involved in what gives your life purpose and meaning.”

We thought of his comments last week as we listened to young leaders talk about their involvement in Memphis.  They are working in meaningful ways on school reform, neighborhood revitalization, poverty, and more.   They talked about their friends living in cities at the top of the most high-performing, most livable cities.  Essentially, their friends are spectators because it is difficult to find their places or to access opportunities to get involved.

And yet, despite this special gift, we can’t be Pollyannish about Memphis.  As the comments to our recent post, Memphis: Losing Ground in the Race for Talent, attest, the risk to young leaders here who want to make a difference and who have new ideas and fresh eyes for our problems is that Memphis tends to grind them down because those in power are loathe to share it (much less give it up) and our leaders tend to talk the talk about talent but at the end of the day, they rarely walk the walk.

There’s so much to be done.  It’s time to create a venture fund in Memphis for social entrepreneurs.  As John Kirkscey persuasively described it, a social venture fund “would open up a pool of entrepreneurs and attract the best and brightest who want to be part of creating a real, authentic, creative city rather than going into investment banking.”   It’s about the same risk/reward ratio that business entrepreneurs use, because “altruism isn’t enough to keep people here if they can’t earn a living.  Each time someone reaches a milestone, money could kick in,” he said.

“Seed funds just need to be a small amount that allows people to live while proving that they can reach the first goal post.  If they don’t make it, there is no more money.  If they do, they get funds so they can move to the second goal post, and if they reach it, then there is more.  There is no money without progress and success. People doing socially beneficial things should get paid for their work.  Otherwise, we have perverted the incentive system and it does not reward people who want to create a good society.  Creative people, artists, and entrepreneurs all take risks, and together, we can make Memphis the Petri dish for creativity.  Now, many people feel like they are hacking through the jungle with a machete trying to find the way to a real, authentic city.”

It’s a compelling idea, and there is much more than we can do, but we begin by talking – and listening – to the 25-34 year-olds that are pivotal to our future success.  We tend to talk at them.  We tend to sell them the answers that we’ve predetermined.  We tend to plug them into programs that were developed without their input.

Talk to the Right People

We are doing many things right but we need to step up our work and broaden our programs.  We need to speak out against cuts in higher education funding that are decimating Tennessee universities, but have particularly devastating implications here at University of Memphis.  We need to convince the Haslam Administration that basing funding only on completion rates is shortsighted in a city where poverty creates many more obstacles for our students than the students at Roane State Community College.

But, most of all, we need to ask members of our target group what we should do to keep them and recruit them.  We need a serious, comprehensive survey of talented workers who live here and see what creates the roots that keep them here; we need to talk to people who are here but are thinking about leaving to find out why; we need to survey and poll talent that has left Memphis to find out what it would take to get them to move back, and then we should interview and poll 25-34 year-old workers in other cities like Nashville and Atlanta to find out why they didn’t consider Memphis and what it would have taken for them to do so.

If we want to get serious about improving our record on talent, we have to get serious about understanding what this group thinks and wants.  Then we have to do something big and bold to create excitement in a demonstration project that tells these workers, who can live and work anywhere, that Memphis today is not the same one they have heard and read about.

We also have to celebrate their ideas and create pathways for them so they can have the kind of impact that proves to them that they do matter and that they can shape Memphis in their image.   It’s easy to feel overwhelmed by our community’s challenges and undervalued as sources of change. But the most exciting things happening in Memphis today aren’t coming top-down from leaders of government, the official power structure, or high-profile civic groups.

Rather, the best reasons to be excited about Memphis are the number of grassroots and neighborhood programs begun by people who care about their city and are determined that it can be better.

Our challenge now is to magnify and amplify them – not just to attract and retain talent, but more to the point, to improve Memphis itself.