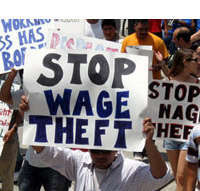 There’s something really unseemly about local restaurant and hotel leaders fighting a proposal that guarantees that low-wage workers aren’t cheated or underpaid.

The Shelby County Board of Commissioners’ resolution to fight wage theft is a laudatory – and much-needed – piece of local legislation now opposed by our local restaurant and hotel associations. It’s a black eye for industries that are major employers of low-wage workers and rely so much on public good will.

Hotels and restaurants are often the first jobs for many of us and jobs of last resort for even more, and by and large, most restaurants and hotels are reputable places to work.  That’s what makes it all the more strange that they would oppose a resolution that more than anything levels the playing field so the reputable are not put at a disadvantage with disreputable businesses that are not living up to the law.

All in the Family

These days, it seems that every time there is something proposed that protects consumers or workers, it’s called “anti-business.”  Some opponents of the policy have in fact trotted out this well-worn meme.

Put directly, it’s simply absurd. If a hotel or restaurant is not stealing wages from its employees, it should have no issue with the law, and why would any employer with a conscience not want to make sure that his industry is not seen as exploitative and unscrupulous?

At times like these, it’s hard for us not to think of our friend and legendary local restaurateur Thomas Boggs who could tell you every employee’s personal situation and who wanted every employee to have their best changes for success in life.  As he once said: “They (our employees) are our family and when they succeed, we succeed.”

It’s a sentiment that seems missing the current discussion, and it reminds us what a gaping hole that was left when Mr. Boggs died in 2008 at the age of 63.

As we wrote after his death: “He remembered his tough times, and because of it, he saw value in every person, and often went the extra mile to help them fight addiction, hardship and personal difficulties, including hiring them at his restaurants where he could run his own 12-step program for them. If anyone’s life embodied the concept of ‘there but the grace of God go I,’ it was Thomas’.

“As a result, he felt compelled to share his good fortune with so many others. He was so clear-eyed about the potential for his life to have taken another direction, and because of it, he often acted as a roadblock to others at risk. He could also exercise the kind of tough love that turned so many lives around.   In the life of the city, he was everywhere. It was as hard to find a local charity that was not a beneficiary of his help as it was to find a bad hamburger at Huey’s.”

We still invoke Mr. Boggs’ example and his quotable philosophy frequently, and as a result, we often ask ourselves: WWTD – What would Thomas do?  It’s hard to imagine that he would not be a fighter for fairness in this case.

A national report concluded low-wage workers exist in a world where they are regularly paid less than minimum wage, where overtime pay is ignored, and where meal breaks are often uncommon.  The report found that two out of three workers experienced at least one pay-related violation in the previous work week with an average violation of $51 of an average weekly pay of $339, or 15% of pay lost to wage theft.   Here, the Workers Interfaith Network (WIN) last year handled over 100 actual wage theft cases, with amounts in dispute averaging over $2,000 per worker.

It’s hard for middle class Memphians to imagine how powerless these low-wage workers are in these situations. It is a national problem, but with a disproportionate number of low-wage workers in Shelby County, it is a crisis here. More to the point, it is a crisis in which it is not unreasonable for us to expect our favorite restaurants and hotels to stand on the side of fairness, equity, and fair play.

The radical idea being considered by Shelby County Board of Commissioners: passage of a local law to allow workers to recover their stolen wages through a county complaint and hearing process.

All in all, the proposal before the Shelby County Board of Commissioners is a businesslike response to a problem.

It responds with an efficient, streamlined approach.  An employee who makes a wage theft claim fills out a simple form with Shelby County, whose Equal Employment Opportunity office determines if it is proper and would try to mediate the dispute.  If that fails, the county office would conduct an informal investigation, and if they found that wage theft had occurred, they would issue a citation (similar to a building code violation or for failure to cut his grass).  Within 90 days, the review would be completed and the matter would go to General Sessions Court, where the judge can order the business to stop its practices, require payment of wages, or fined $50 for each violation.

We live in a world of situational ethics, but it is striking to us that if someone steals money or property from us, there are detailed legal processes for action.  And yet, people can have their wages stolen from them and a practical answer to the problem is fighting for the required votes on the Board of Commissioners.

With commissioners’ approval, the law becomes effective for unincorporated areas of Shelby County.  A similar law is being considered by City of Memphis government that would apply within the city limits.

The legislative bodies of city and county governments have shown leadership – not to mention a sense of what’s right and wrong – with consideration of policies anchored in equality and fairness, not to mention the Golden Rule.  This wage theft law falls squarely in that category.

The most exciting things happening in Memphis are not happening in the traditional halls of power and are not being driven by the official power structure.  They are instead flowing out of Memphis neighborhoods in dozens of grassroots initiatives driven by a sense of urgency that serves our city well as we attack one of our biggest challenges: business as usual.

The Workers Interfaith Network – led by the indefatigable and inventive Rev. Rebekah Jordan Gienapp – has pricked the conscience of our community with its campaigns on living wage, against wage theft, for worker safety, and for the right for workers to organize.  She leaves next month as the founding executive director for WIN after a decade in which she has proven again the power of an individual to change history.