Earlier this year, one of the municipal mayors, when asked about negotiations with the new unified school district, famously said “that train has left the station.”

Well, this week, U.S. District Court Judge Hardy Mays brought that train to a halt with his ruling voiding the new school districts that the municipalities were so blindly pursuing.

Maybe, now, finally, everyone will get in a room, act like grown-ups, and find a way to make sure that every student in this county receives a quality education.

Here’s a post from February 20, 2012, about the behaviors that contributed to this problem: 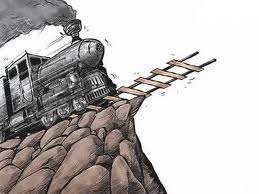 It’s tempting to apply this principle to the town mayors, but when it comes to schools, they are more like petulant children determined to ignore the grown-ups in the room.

We’re going to hold our breaths until we get our way.

That was the tone of the mayors when they met with the schools planning committee generally, particularly two adults the mayors should listen to, Shelby County Mayor Mark Luttrell and FedEx Corp. general counsel Chris Richards.

Neither are anti-suburban people so their concerns and interest can’t be questioned as more talk from pro-Memphis liberals. And yet, their concerns and advice were dismissed just as cavalierly as obstacles to the town districts were swatted away by the consultant hired by the mayors to drive the facts and town school districts to a foregone conclusion.

Memphis Daily News reported that Mayor Luttrell asked: “Is the problem so compelling that you have to hit that September 2013 deadline?  Is that something that could be delayed for a year?”  Luttrell was also one of many questioning the conclusions of reports from Southern Educational Strategieson which five of the six suburban cities are basing their plans – including how to pay for the school systems.

“I just don’t think you can do it on a half-cent sales tax or a 15-cent property tax hike,” Luttrell said of the SES funding estimates. “That really troubles me.”

We can’t hear you.  We can talk louder than you can.

“The people who do not live in Arlington are counting on representations that have been made that they will be able to keep their children in Arlington schools,” she said. “The way I look at it, there is one group sitting in this room that has clear legal authority to set forth a plan that will allow the expectations of all of those parents to be met. And that’s the transition planning commission.”

Then, there was Planning Committee Chair Barbara Prescott, highly respected civic leader and former Memphis City Schools Board member, who calmly suggested that the towns should take the reasonable approach: wait to see what the committee’s recommendations are before rushing to judgment.  “Come August 2013, we will have a plan that can serve your children and serve them well,” she said.

We’re not listening.  We want what we want.

Planning Commission member and former Shelby County Commissioner from Collierville Tommy Hart said: “I feel you are disenfranchising your citizens.  Until we put a plan on the table, what are they (town residents) voting between?  They are not making a choice.  They are just affirming what people in the community have talked about.”

The mayors’ terse response: the train has left the station.  The fact that it could jump the track any minute – over the price the towns should pay for school buildings and whether municipal districts are entitled to county funding – are mere minor points for them. They are engineers of the Cannonball Express.

The town mayors have said smaller districts are better.  The Transition Planning Committee is poised to propose six largely autonomous districts that would be smaller in size than Shelby County Schools (and none of the town mayors seemed to have their present obsession with smaller size when they were part of that 50,000 student district).

All in all, behavior aside, the mayor’s attitude toward public education merely institutionalizes an enmity toward all things Memphis which will provoke a similar hard-nosed response from Memphians over the long term as Memphis interests dominate policies of county government.   Just as every action provokes an opposite and equal reaction, it will in the case of schools, but the opposite reaction will set a course that in the end will marginalize the towns in the affairs of our community.

In other words, in their haste to show their disdain for Memphis, they will set in motion a current that will in the end sweep in the nightmare they fear most: a city government that swells to control 500 square miles of Shelby County and be the single dominant and dominating government in the region as Shelby County Government’s influence dwindles.

Here’s the main thing: if the towns are willing to raise their taxes by at least 15 cents – likely much more in the coming years as we and Mayor Luttrell suspect – they should no longer be subsidized in any way from Shelby County Government.

For example, county taxpayers – of whom Memphians are the majority – should not subsidize towns like Arlington and Lakeland.  Arlington keeps its taxes low by not having a police department. There, law enforcement is provided by the Shelby County Sheriff’s Department.  Lakeland has never been a “real” city with property taxes, and county taxpayers have been subsidizing its law enforcement and fire protection.

Residents of Germantown and Collierville clearly must have enough money to start their own ambulance services so that they don’t need a partnership with county government whose calculations about how much the towns owe has been suspect.  Meanwhile, no town receives more services and help from county government than Millington.

And if the towns have enough money to jack up taxes to protect their school turf, Memphians would have no objections at all if they would like to repay the costs of decades of subsidies by county government.  After all, there was a time in the not too distance past when county government paid for the total cost – and later a percentage of the costs – of major roads inside the towns (it didn’t make a similar offer to Memphis).  For decades, Memphians subsidized the towns’ libraries through their county property taxes which paid the total cost of libraries in the towns, both operations and capital costs.

Well, you get the point.  If the towns now want the schools within its borders, the Planning Commission should discount it by the percentage of the total county tax base that is paid by residents of that town, thereby, arriving at the final price.

Meanwhile, the town mayors continue to say that there only concern is about the academic achievement of the children within their borders, but notably, there has been no study about how to improve student performance. There’s only been one to justify what the mayors already believed.

One of the hallmarks of childish behaviors is magical thinking, and nothing defines the town mayors’ point of view more than that these days.

The Truth about U.S. Students