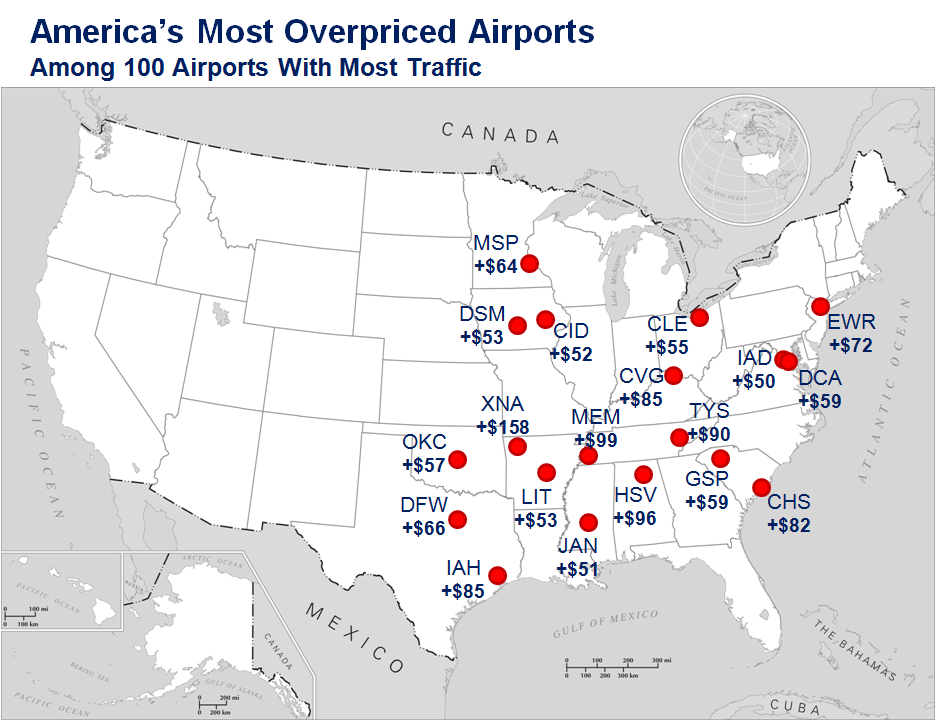 When the airline industry was deregulated in 1979, the promise was more airlines, more competition, lower airfares, and better service.  It was not to be, and today, where there was once a couple of dozen air carriers, the future is to be dominated by three mega-carriers.

It’s reminiscent of the deregulation of the railroads.  The 60 railroads then are now only four – two east and two west of the Mississippi River and without direct competition.

New America Foundation – with its predisposition to fight monopolies – and Washington Monthly convened a panel discussion last week in Washington, D.C., to consider the question: Is It Time To Re-Regulate America’s Broken Airline System?

While we’re not certain what the answer to that question should be, we are sure that more of the same is definitely not in the best interest of Memphis.  The ultimate irony is that in the city where FedEx invented modern global commerce, high airfares are barriers to us connecting with the international, and even the national, economy.

The panel discussion was provocative, but the most promising information for Memphis is that we are not alone.  St. Louis, Cincinnati, and Pittsburgh are also being abused and their economies, like ours, are paying a heavy price.

Because of it, there is an opportunity for us to do more than just form a support group for our mutual therapy.  More to the point, there is the opportunity for Memphis and these cities to work together at a national level to address the airline problems that are ice on our wings.

Here’s the thing: the Memphis region is at a pivotal point, and we need an awful lot of things to break right if we are to leap frog over our competitors and chart a more positive trajectory for our economy.  Connectivity is one of the things that is deciding which city economies are winners and which are losers.  Connecting our economy to the global economy, connecting our ideas and innovations to the international marketplace, connecting to our peers, and connecting talent to Memphis are crucial for our success.

In this way, Delta Airlines is not just creating personal inconveniences for Memphians.  It is in a real way creating a major obstacle that weakens the economy of Memphis and our regional performance.  That this is happening in a region with one of the lowest median household incomes in the U.S. only exacerbates and amplifies the risks.

Josh Marks of the American Aviation Institute said in the Washington panel that Delta Airlines “screwed” Cincinnati “because they could,” and it’s pretty hard to see why we shouldn’t add Memphis to that sentence.  In addition, St. Louis, once an island of American aviation, is a parched desert, according to Jim Oberstar, former U.S. Congressman and former chair of the House Committee on Transportation and Infrastructure.

Although the Airport Authority’s happy talk and justifications have been frustrating, perhaps they are the wrong people to make the case in the first place.  It was said in Washington that they are doing little because they fear upsetting their largest passenger airline, and it’s really not in the culture of the Airport Authority any way.

It’s easy to reach the conclusion that the Authority members don’t see themselves as members of a public board but as members of a special club.  It’s an attitude that’s exhibited in the professional portraits of the members in glass cases, in the entry road being named for a former Authority chairman, and the approach road now bearing the honorary name of the present Authority chairman.

It’s as if the Authority is tone deaf to the problems of the public.  The honorary road sign sends the message that members are much more interested in being honored than in acting as the public’s voice for better treatment by Delta Airlines.

To complicate things even more for Memphis, 50-seat regional jets are becoming obsolete and airlines are favoring high-density routes, according to Phillip Longman, senior fellow for New America Foundation.  To underscore the point, he pointed out that the cost of flying from Washington to San Francisco is half the cost of flying from Washington to Pittsburgh.  “It’s more than appropriate to have public policy to equalize it,” he said.

Washington Monthly editor-in-chief Paul Glastris said present air fares is like “people in Memphis having cellphones that don’t reach the rest of the country but cost three times more.”

Things are likely to get worse in the event that they’re ever going to get better. Mr. Oberstar said the future will be one with three global mega-carriers.   In the meantime, carriers like Delta will do whatever it can to prevent their “fortress hubs” from being competitive for passengers.  “It’s the power of the hub to drive out competitors,” he said.

The panel discussion resulted from the Washington Monthly article, “Terminal Sickness.”  “The article begins with the premise that American airline industry is failing,” Mr. Longman said.  “Shareholders lost $50 billion in the past 10 years.  We know the shared indignity of travel, but there’s a new trend with enough momentum to be very serious.  Major places like St. Louis, Cincinnati, and Memphis are cut off from the global economy because of merger and machinations.”

Airline policy has become de factor economic policy, said Mr. Longman.  “Fares have declined at a lower rate after deregulation than before.”

Back to the Airport Authority, maybe it’s unfair to expect its members to resolve this problem.  Rather, it requires a citywide response not just from Memphis, but working with other cities in the same position.  It’s the sort of conversation that has to begin at a leadership level – between elected officials and between heads of Chambers of Commerce from the various cities.  We can pool our energy and our political clout to develop a plan of action that gets attention in Washington and in Atlanta.

As a member of the House Transportation Committee, Congressman Steve Cohen needs to tell us what he can do to help with this problem.  While the multi-city political approach is aimed primarily at Delta Airlines, it also should aim at the U.S. Department of Transportation, which is spending tens of millions of dollars to add new highways and highway lanes to our region while we could really use the money to pay down the tickets for key routes.

In 2000, a group of Delta customers proved the power of collective pressure when it mounted a campaign to oppose changes to the frequent flyer program.  Most of all, it’s time to put together a grassroots social media campaign that sends the message to Delta that we expect to be treated like customers, not prisoners.