If The Family Action Council’s Lips Are Moving… 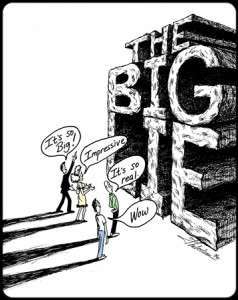 The folks at the Family Action Council of Tennessee suggest that they stand like a rock on their principles.  That shouldn’t be particularly hard for them since it’s a rock that they’ve climbed out from under.

Even in an era where we have all become accustomed to the “Big Lie” as political strategy, the Family Action Council deserves the title as “Big Liars.”  It’s not just that they spew hatred and prejudice, which were never values in the families we know, but that they so proudly lie about the fact while preying on people clinging to the belief that there is always a scapegoat who can be blamed for their frustration with a changing world.

It’s tempting just to ignore them, because it’s inarguable that they’re on the wrong side of history.   Heck, they’re even on the wrong side of Christianity as they selectively obsess on a verse in the Bible to magnify their fixation on homosexuals while absolving themselves from any Biblical sanctions about divorce and other heterosexual behaviors.

Their political base is dying out, replaced by more tolerant and more moderate young people who aren’t interested in vilifying women who control their own bodies, objectifying homosexuals as if they are the cause of all that ails America, and condoning bullies in our schools.  In a world known more and more by diversity and tolerance, they cling to the world where white men make the rules and decide who is a winner and who is a loser.

If patriotism is the last refuge of the scoundrel, the very last refuge of the scoundrel is patriotism posing as religious dogma.  Because of it, The Family Action Council is both anti-American and anti-Christian, building on the pretense that its extremist opinions about everything from the founders of the U.S. to religious principles are actually facts.

George Orwell saw it coming: “To tell deliberate lies while genuinely believing in them, to forget any fact that has become inconvenient, and then when it is becomes necessary again, to draw it back from oblivion for just so long as it is needed…”

Research at the University of Michigan found that when misinformed people, particularly political partisans, were exposed to corrected facts in news stories, they rarely changed their minds. In fact, they often became even more strongly set in their beliefs. Facts were not curing misinformation. “Like an underpowered antibiotic, facts could actually make misinformation even stronger.”

These studies help to explain why people like the Family Action Council inhabit a closed belief system where they pick and choose only what allows them to wall themselves off from uncomfortable truths. It’s how they lie about the bullying that led to the death of a young Tennessee boy and suggest with a straight face that gay-hating bullies in school should be given protection to torment their peers with name-calling and intimidation.

It’s a classic case of blaming the victim, because they have to shed even the last shred of their humanity to attack the suicide of a teenage boy as caused by his homosexuality rather than the attacks and intimidation by gay bashers in his school.   We’ve heard it all before from these apologists for basest form of human behavior (sorry, we mean family value).  They exist in an echo chamber that justifies everything from torture at Abu Ghraib to murder of abortion doctors to attacks on gays.

They’ve also learned this about The Big Lie: the bigger the smear, the more it sticks. And as they have proven, there is no shortage of smear artists.  It’s all reminiscent of the days when similar people used the Bible to defend segregation, poll taxes, and “Tuesday is the day for blacks” at public facilities on the basis of their religion.

It’s no wonder that given a choice between discrimination and equal liberty, the right wing extremists – all while professing an unyielding belief in small government — choose government intervention over personal rights on issues like same sex marriage.  Given a choice between anti-gay bullying on the schoolyard and anti-gay epithets, they come down on the side of the bully.

We predict confidently that there will be a time when the Family Action Council will be viewed with as much disbelief and disgust as we now view Father Coughlan’s hate-filled sermons of the 1930s.  As the Family Action Council the meaning of Scripture and parses words to support its pre-existing prejudices, it joins other false prophets proven over time to be absolutely wrong in their theology.

History has a way of overtaking religious bigotry, from the Inquisition to the Crusades, from bloody conversions to Christianity and Bible verses used as justifications to take people into slavery, and from anti-Semitism to Copernicus.  In other words, the Bible accepts things that we condemn today and we accept behaviors that it condemns.

It’s an anti-intellectual theology that treats the Bible as if interpretations of its verses haven’t changed drastically over time nor that the culture and context of the time when it was written aren’t relevant in understanding them.  If, as the Family Action Council believes, homosexuality was a prime concern of Biblical times, it’s strange that Jesus said nothing about it nor did the Jewish prophets, and while people like those at the Family Action Council obsess on six or seven verses in one million to justify their political positions, none of these verses refers to same-sex orientation as it is today.

There are many people of good faith and deep faith who are wrestling with these questions in honest and sincere ways.  Some feel that while they have no personal objections to gay relationships, they see the Bible as unyielding and unequivocal on the subject.  And yet, Christianity celebrates heroes who changed their minds about the meaning of various Bible verses, and even if we believe that the Bible is infallible, it’s still dangerous to assume that some humans are convinced that they are infallible in their interpretations of what it says.

In times of great change in history, there is often a brand of extremism that does everything possible to resist and to attack the symbols of that change.  Gays are a convenient stalking horse for extremists, who promote the fiction that 5% of the people in this country have an agenda that is eroding the rights of the rest of us.  If American history tells us anything, it is that it is the minority that must fight and campaign for their full rights.

More to the point, some of the most religious, church-going people we know are gay.  If Family Action Center wants to quote Bible verses, how about the ones warning about judging others and casting the first stone?

The degree of manipulative distortion today seems to know no bounds, and at times, the real war on terror appears more accurately to be a war on reason.   Jingoism is an American tradition, but it’s hard to think of an era when the truth has been as effectively dispatched in pursuit of political gain and personal hatred as it is today.

Every utterance of the Family Action Council proves it so.

A Memphis Welcome Begins At The Airport

Defining the City: On Being and Becoming