How Temporary and Simple Places Can Define City Life

Just imagine an efficient scene of shuttle transit from a large parking area to your destination, a compact service district. At the end of the shuttle, medical services, a bank, food, drink, entertainment and public restrooms greet your arrival. The spirit of human activity and community are everywhere. 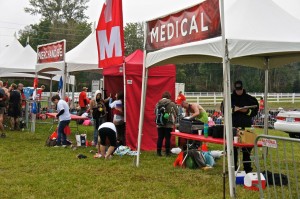 And that is exactly the point, as the description above is not of a city, but of the staging and administration area for the obstacle course known as Hell Run, “the most kick-ass mud run on earth”.

Participation in a temporary gathering place, whether it is the staging area for Hell Run, Burning Man or a county fair, remind us of the fundamentals of human settlement, and the framework elements we are trying to recapture in rethinking cities today.

In fact, several authors have addressed the more purposeful creativity of Burning Man, and have debated the urbanistic standing of temporary or nomadic encampments, or, as Nate Berg has noted, city-like places.

I am particularly interested in core services that appear in such places, whether they last for one day or several, and what their inadvertent presentation and implementation tell us about human nature and first principles of association in urban areas. As Aron Chang recently wrote in adapting the work of Ellen Dunham-Jones, Christopher Leinberger and others, embracing traditional human qualities and day-to-day life patterns is essential if historically sprawl-based suburbs are to be successfully reinvented. 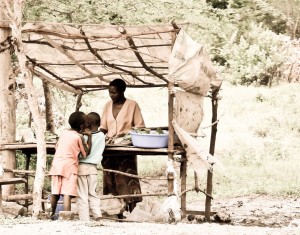 For me, the look and feel of the Hell Run staging area was actually a gestalt reminder of more profound, simplifying experiences in Tanzania earlier this year.

There, witnessing daily life was a “back to basics” reorientation which confirmed the underpinnings of cities as conceptualized by the Richard Florida model: places to creatively reinvent human capital from the ground up, taking people’s common and creative potential to higher levels.

I am not arguing event planning as a replacement for urban planning. Rather, I am using visual examples to agree with those who have acknowledged the human aspect of urbanism over top-down prescription or unsustainable patterns of growth.

As illustrated, temporary and less developed places can look eerily similar in the way fundamental human services are congregated and presented to the public, and I would venture that these are the true building blocks of cities everywhere.

It is beyond these building blocks—how our cities and those of the developing world continue to grow, and how growth is administered—where the real challenges continue. 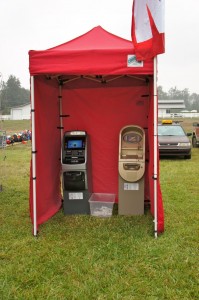 Last March, in a baseline examination of the fundamentals of housing and the wheeled vehicle, I focused on a nagging question brought home from Tanzania and which recurred at the Hell Run staging area: Do we sometimes regulate away the urban vitality of our cities by attempting complex, prescriptive fixes — aimed at modeling or reclaiming what used to evolve naturally — and ironically squelch the first principles of human shelter and transportation suggested above?

Inherited forms of shelter and age-old methods of transportation are to residential zoning and infrastructure planning what oral histories are to Gutenberg — the backdrop of rich tradition for codification and institutional creation. If safety and well-being are maintained, such institutionalization may be laudable for preserving practices or legends otherwise lost with time. However, if the result is lost functionality, needless complexity, discrimination or prohibitive expense, the institution may need reexamination.

For instance, what if a zoning code is no longer cohesive, or impedes rather than accomplishes societal goals?

What if the automobile is overused, at increasing expense, when bicycle, cart, or other transportation would do, with the value added of health and exercise?

Sometimes this contrast of fundamentals to complexity, or of a different place and tradition, can refocus priorities, and warp the senses.

In the words of the postwar Italian writer and Invisible Cities author, Italo Calvino:

Traveling, you realize that differences are lost: each city takes to resembling all cities, places exchange their form, order, distances, a shapeless dust cloud invades the continents. 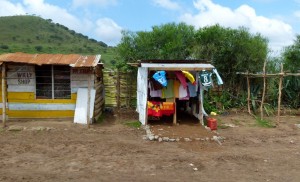 Consider Tanzanian roadside stands and the traditional forms of transportation used when a car is either unavailable, inaccessible or inappropriate. Commerce and people can move, without regulation. Wheels and the human body go places in ways we have forgotten. Innovative, human-propelled transport, often with goods attached, knows no bounds.

While not literally Calvino’s cities, images from the developing world, coupled with temporary places such as the Hell Run staging area, “exchange their form”. Together, their initial modesty suggests that through the complex evolution from initially well-meaning institutionalization, we risk losing what is most human about places we live.

So, in building urban community, it remains imperative to reassess—with simplicity in mind—and to always remember first principles, such as shelter and the wheel.

All images composed by the author near Karatu, Tanzania and Carnation, Washington. Click on each image for more detail.

Supporting Memphis Is In Shelby County’s Own Self-Interest

A Few Left Over Items

A Different View of Detroit