Schools “Compromise” – A Cure Worse Than The Disease 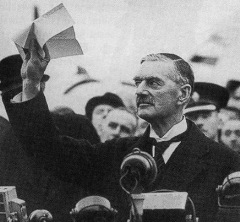 Peace in our time.

Once again, short-term political interests may be on the verge of defeating long-term good sense.

It appears that in hopes of eliminating political risk, some people are willing to sell the rights of Memphians down the river in exchange for what has been amusingly been called a “compromise.”

At least that’s the misnomer being used to describe the proposed agreement being reached by some members of Memphis City Schools with the all-white Shelby County School system and encouraged by the all-white legislative delegation outside Memphis.

Politics makes strange bedfellows, but in this case, one of the bedfellows is assaulting the other.  That’s because the compromise being proposed not only calls for both sides to stand down for a year but allows a countywide vote if a referendum to surrender the charter is put on the ballot at that time.

It’s hard to imagine any Memphis elected official who would agree to disarmament with no promise that everything won’t actually be the same in one year – no legislation passed by the Tennessee Legislature, no actions by the Shelby County School Board, and no actions by the towns to create their own school districts.

In other words, how does anyone reach an agreement that is totally risk-free for Memphis?

This “compromise” doesn’t even manage to offer a benefit for Memphis City Schools, much less hold it harmless.  In exchange for this open-ended deal, Memphis City Schools would put itself totally at risk, so in the end, we expect wiser heads to prevail.  City schools gain nothing in the 12 months, and it is almost inevitable that at the end of a year, we’ll be in the same place, with the same political environment, the same rhetoric, and the same propaganda from Shelby County Schools.

There may be some who see this as brilliant master stroke in politics, but it is impossible to see it as anything but dismal policy.  That’s why we think that any Memphis elected official who would agree to this should at the same time turn in his certificate of election.  After all, there is nothing that this agreement does so much as to establish colonial rule for Memphis where other people can decide what’s best for the unworthy and unwashed masses in the city.

It has been said that Memphis City Schools Commissioner Jeff Warren has been the force driving this “compromise” with Shelby County Schools, and while we don’t want to question his good intentions, this is tantamount to telling one of his medical patients that they are seriously ill but he’ll let another patient decide what should be done.  Maybe it’s just the difference between a primary care physician and a surgeon.  Sometimes, it’s not always the palliatives but risky surgery that saves the patient.

At this point, this is not an isolated issue affecting schools.  Rather, if Memphis City Schools Board of Commissioners approves this agreement, they will have set the ignoble precedent for non-Memphis voters to have a say in issues that are by law strictly decisions of Memphians.

Our mothers told us that we would be known by the company that we keep, and the willingness of some city board members to consider Shelby County Board members as their allies rather than their own colleagues is a troubling display of “my way or the highway” politics.

Unfortunately, this is public policy, not medicine, where we assume our physicians are always right.  In this case, approval of this agreement would be a case of the cure being worse than the disease.  We can only hope that Dr. Warren shifts from proving he was right to finding a way to support Memphians’ right to self-determination without outside interference.

No Protection, Equal or Otherwise

Already, we have heard that the U.S. Department of Justice has been alerted to the machinations of the amendment by suburban state senator Mark Norris to change the rules in the middle of the game and to undercut the right of Memphis voters to control their own futures.  It seems obvious to us that the ability of the majority white suburbs to water down the ability of the majority African-American city to decide what to do with its city-only school district makes for a powerful federal court lawsuit.

That lawsuit based on the equal protection clause of the 14th amendment to the U.S. Constitution was certainly strengthened when the new Speaker of the House, Nashville Republican Beth Harwell blurted out: “I am very open to do anything I can to help our Republican legislators from Shelby County, who have a real serious issue on their hands.”

And we were naïve enough to think that her party really believed their rhetoric about the best government being the one closest to you.  Because of a minority of legislators in Shelby County, she is willing to fast track the Norris bill and violate years of legislative precedent that allows public input and committee hearing.

Well, at least she’s honest.  It’s all about who you know in the new Tennessee Legislature.


Meanwhile, Mr. Norris tries to portray himself as only a vessel serving the public interest in pushing for an agreement between the two districts.  The fact that none of this has involved the people in the majority who voted for the referendum is of no consequence.  It’s all about winning.

The draft agreement itself would be laughable if it weren’t so obvious in its racial motivations.  It says its purpose is to “preserve the status quo regarding school districts in Shelby County.”  We suppose that the status quo is good enough for some people, but Shelby County Schools only said it will do this for one year.

Meanwhile, the agreement does not prevent the passage of special school district legislation, only that the county district “will refrain during the term of this agreement from acting pursuant to state law.”

That’s cold comfort, since it’s implicit that they will move ahead at the end of the year.  To give the appearance that something substantive is really getting done, city and county schools will hire a “school district governance and funding expert” to consider the options for schools, four of which favor Shelby County Schools’ position and one that reflects the Memphis City Schools’ vote.

According to the draft agreement, as many as 60 days can be taken to hire the experts, leaving about 10 months to conduct analysis on five options that have previously thwarted years of work.

We won’t bore you with the rest of the “compromise” language, since it’s about as compromising as Shelby County Schools Chair David Pickler has been throughout this process.  Whoever contributed to this agreement on behalf of city schools must have been asleep at the switch since it’s impossible for us to find a single item in the “compromise” that benefits Memphis City Schools.

All in all, it seems the educational version of the “peace in our time” declaration by former British Prime Minster Neville Chamberlain in his misguided attempt to pacify the Germans prior to World War II.  Before any Memphis City Schools board members support this “compromise,” it might be a good time for them to acquaint themselves with the Munich Agreement and the prime minister’s justifications for it.

One thing is obvious: there are worse things than conflict.

Turning the Forbes Moment into a Memphis Movement

A $75 Million Error on MCS Funding