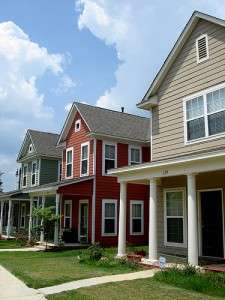 It must have been an awkward moment for Memphis Congressman Steve Cohen while announcing the $22 million HOPE VI grant for Memphis that ostensibly pays tribute to the impressive success of the Herenton Administration in  winning the competition for the federal funds.

Only a handful of cities – including some many times larger than ours – have gotten five HOPE VI grants, and with the latest award, Memphis Housing Authority will have removed public housing as we knew it only 15 years ago.  Today, in its place are mixed-use, mixed-income neighborhoods, and the latest grant will fund the Triangle Noir vision of MHA executive director Robert Lipscomb.

The five HOPE VI grants have provided $150 million to City of Memphis to remake public housing, but that amount has been leveraged several times with private and philanthropic support.  While former Memphis Mayor Willie W. Herenton’s rhetoric often tended toward the “downtown renaissance,” his success in reinventing public housing has to be his second most impressive accomplishment, right under his ability to fight successfully the “tiny towns” movement that threatened Memphis in the 90s.

There was little that Congressman Cohen could do to keep much of the credit for the announcement to flow to his opposition in the upcoming election.  In that regard, the announcement was pretty much a draw, much like the faux controversy over their debates.  With sound and fury signifying little, both candidates in the he said-he said controversy about debates ended up pleasing their base and perhaps that was enough for each of them.

Lately, a report that the congressman passed up an opportunity to call I-269 what it is – a gigantic attack on Memphis and another gift to sprawl – created ripples of concern among some neighborhood supporters and prompted rumors that he was rounding off his message in light of developers’ support.  Congressman Cohen has never had a penchant for those kinds of responses, so we hope that he is not succumbing to the hypnotic effect of the safe answer and contributor influence.

Hope springs eternal, but Hope VI regularly has to fight for its life, not to mention its credibility.

It’s a curious dilemma for a federal program that has pumped $122 million into Memphis to end the warehousing of poor families jammed into housing projects with from 442 to 800 units.

Threatened frequently with political extinction since it was created in 1992, HOPE VI has survived Congressional votes only to be accused of displacing poor families to make way for people with higher incomes. In addition, earlier this year, it was indicted by Atlantic magazine as a co-conspirator with Section 108 housing vouchers on a charge of dispersing crime throughout Memphis.

Herenton Administration officials, who have navigated the federal bureaucracy to land an enviable five HOPE VI grants in the past decade, were quick to respond, suggesting that old-style housing projects were little more than government-created ghettos where poor people were marginalized. In truth, it’s impossible these days to find anyone who argues that massive public housing projects were smart social policy, because in concentrating the problems of poverty into compact, overcrowded environments, the web of poverty-related problems was merely amplified and intensified.

But defense of HOPE VI projects by city officials was more than defense of its marquee program. More to the point, these projects are the physical symbols of how far Memphis Housing Authority (MHA) has come since 1992, when it was cited as one of the nation’s worst-run public housing agencies.

It was the same year that Lauderdale Courts, whose Apartment 328 housed the family of aspiring singer Elvis Presley from 1949 to 1953, was added to the National Register of Historic Places, and Memphis’ first African-American mayor, Willie W. Herenton, took office.

The new mayor set two priorities for MHA – get off the HUD list and attract more federal money to his city.

It’s no coincidence that changes in MHA leadership and success with HOPE VI applications ran parallel, because the close work between MHA and HUD to turn around the Memphis public housing agency led to the improved relationship and confidence level that became the foundation for a stepped up campaign for more funding.

It was not long after MHA got off the HUD list in 1995 that it received the first HOPE VI grant, and the attention to relationship-building paid off with more success – four more grants since 2000.

In each case, a public housing project that was “no man’s land” for anyone but its residents became a site for New Urbanist-influenced housing, and one in particular, Elvis’ former housing project became a national model for how public housing could be made more livable while preserving a prime example of New Deal architecture.

Instead of the wrecking ball for Lauderdale Courts, it became a $36 million public-private redevelopment christened as Uptown Square. Unlike the other HOPE VI projects where all buildings were razed, only 95 of the original 442 Lauderdale Courts units were removed.

Overall, according to Memphis Housing Authority, 2,465 of 2,812 units in the five HOPE VI developments were demolished and 1,299 people were relocated. Of that number, 555 were relocated to other public housing, 522 used vouchers for new housing, and 222 relocated private-owned housing.

It was this diaspora that got the blame for decentralizing crime in Memphis, but more to the point, the roots of the problem run directly to the city’s intractable poverty, now at crisis levels.

About 162,000 people live in poverty in Memphis (the equivalent of the entire population of Chattanooga) and the extent of the human wreckage is frequently obscured in a problem commonly defined in statistical terms. Since 2000, Memphis’ poverty rate has climbed a disturbing 30 percent, and alarmingly, the statistic most pertinent to crime rates – the percentage of youths under 18 living in poverty – is at the danger point – 42 per cent and continuing to rise.

Getting To The Roots

Now taking form at MHA is the outline of what its director Robert Lipscomb told City Council would be a “straightforward, honest civic conversation” about poverty. It’s an overdue conversation that must be candid but promises to be emotional, because of the convergence between race and poverty in Memphis.

In the end, that’s why Memphis needs more than HOPE VI. It needs good old –fashioned hope itself – hope for a cathartic discussion that moves from debates about symptoms of poverty – crime, teenage pregnancy, infant mortality, and low high school graduation rates – to a plan based more on action than analysis.

Have We Seen the Future?

Social Justice: Who Am I That I Should Hinder God?