There’s nothing better than seeing our city through other people’s eyes.  That’s why we are so proud to have Amie Vanderford’s distinctive eye on Memphis featured on our blog.

Now the New York Times is reporting on the quirky, funky Memphis that we all know and love.  I’m also proud to say that my sons-in-law, Matt Timberlake and Jeremy Shrader, have performed in most of these special places.

Here’s the view from the Gray Lady: 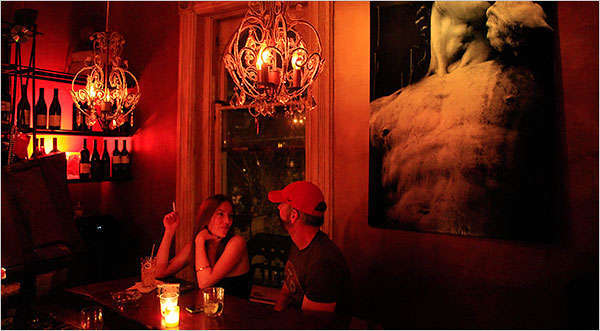 IT’S hard to shake Elvis in Memphis. His pompadoured, crooning visage peers out from all corners, from jukeboxes to diner counters. But the King was nowhere to be found at Electrocity, a semi-legal warehouse party that was recently held in an unheated garage in the city’s energetic Midtown neighborhood.

A rusted Mustang and a couple of motorcycles sat in a corner. Christmas lights crisscrossed the ceiling. A motley crew of the city’s scenesters — from Burning Man types who brought their own Hula-Hoops to nu-Goths in their Edwardian frippery — danced until they were sweaty, even in the cold.

With vintage cartoons projected overhead, the three D.J.’s who have been giving these parties for about a year were bent over record players and laptops, spinning MGMT remixes and the Yeah Yeah Yeahs. There were a few glow sticks and kegs of beer, which emptied quickly, but no bother, just bring your own. “Feeling good, feeling great,” a guy said, as he made his grinning way through the crowd.

This is indie Memphis, a long way from the tourist crush of Beale Street and Graceland, in spirit if not in actual distance. Midtown, just a short drive from a downtown famous for its blues, jazz and barbecue hounds, is its hipster epicenter, a diverse area that is now home to posh cocktail bars as well as divey rock clubs and longstanding juke joints. It parties late, very late, and stays friendly through the night.

“We’re the real deal,” Archie Turner said as he packed up his keyboard at 4 a.m. at Wild Bill’s, a dive bar, barbecue spot and soul joint that is one of the area’s most belovedly ragged destinations. Mr. Turner, 64, is the stepson of the late Willie Mitchell, a record producer who put out seminal albums by the likes of Al Green at Hi Records, his studio around the corner from the better-known Stax. Memphis rewards localism and loyalty — Hi Records is still open today — but there is also room for renewal.

This Week on Smart City: Big Ideas and Big Change