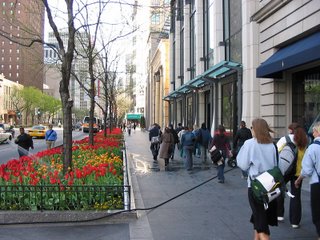 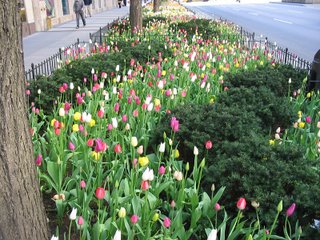 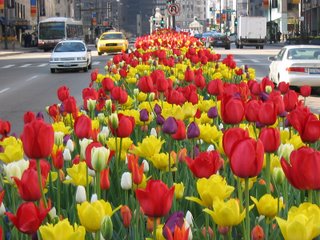 Chicago is a city that does so much right.

And we’re not just talking about the remarkable phenomenon that is Millennium Park.

More to the point, a recent visit to the Windy City reminded us of the impact of how important it is to do the little things to beautify a city and uplift city living. We found it impossible to keep from smiling when confronted with hundreds of thousands of tulips that seemed to burst forth on every major downtown street.

It seems that Mayor Richard Daley has no intentions of resting on his laurels, but continues to fulfill his promise to make Chicago the “greenest city in America.” There are now more than 70 miles of roadway medians stretching out into the city’s neighborhoods that are green and blooming, not to mention the more than 500,000 trees that have been planted during Daley’s terms of office.

Meanwhile, Millennium Park has become the city’s most beloved public place, but more to the point, there’s no feeling that it’s getting special attention. The parks along the lakefront are beautifully maintained and city government is constantly upgrading the more than 1,100 parks, recreational areas and beaches that it is responsible for.

If you’re ever wanting to see the power that parks and green spaces have to enliven the pulse of a city and the lives of its people, go no further than Chicago. At a recent meeting of CEOs For Cities, the Trust for Public Land’s Will Rogers made the point that cities are the midst of a green renewal, turning to their parks once again as the threads binding together the fabric of community.

Chicago invested in a different reality at a time when no one would have ever predicted that its future would be associated with such remarkable green strategies.

Cities that do it right make it look so simple, as the tulips down Michigan Avenue reminded us. Too many cities, like our own, cut parks’ budgets and pursue new arenas and big showcase projects, when often what we need most to make us prouder of our city and happy to be part of it are flowers.

A recent New York Times article said it all: To Revitalize a City, Try Spreading Some Mulch. Some times, it’s that simple; the most basic things can make the most difference.

Here’s an excerpt from the article: “…mulch is an organic metaphor, tying together the various pieces of Chicago’s novel development strategy, praised by the Sierra Club and the Chamber of Commerce alike. By wrapping its arms and famous big shoulders around its Latin motto — Urbs in Horto (City in a Garden) — Chicago has become a global model for how a metropolis can pursue environmental goals to achieve economic success.

“During the last decade, the city’s performance, measured in virtually every conventional category of civic well-being, has been off the charts, local boosters say. Chicago attracted more than 100,000 new residents, added tens of thousands of downtown jobs, prompted a high-rise housing boom, reduced poverty rates, built thousands of affordable homes, spurred a $9-billion-a-year visitor and convention industry, and transformed itself into one of the most beautiful cities in America.
“The generator of Chicago’s mulch is Richard M. Daley, the unorthodox and popular Democratic mayor who took office in 1989 vowing to replant the urban forest of his youth that was lost to Dutch elm disease and other blights. At the time, the pledge raised the eyebrows of supporters and critics, who chalked up the mayor’s love for trees to his birth on Arbor Day in 1942.

“The tree planting, though, evolved over Mr. Daley’s five terms into a much more sophisticated understanding of the benefits — including to the city’s treasury — of conserving resources, saving energy, expanding parks, constructing environmentally sensitive buildings, reducing the amount of storm water, restoring wetlands, generating renewable energy and doing everything feasible to heal instead of harm the city’s natural systems.

“Over the years, Mayor Daley’s plan to turn his hometown into the “greenest city in America” has ceased to be an unusual experiment in revitalization. Instead it is seen by urban policy specialists as an effective response to the rapidly changing expectations that business executives and residents, especially young professionals, have for cities.

“The Daley administration has planted 500,000 trees, is putting up the most energy-efficient and environmentally sensitive municipal buildings in the country, has agreed to provide developers with much faster permits if they construct green buildings, instituted a $600-million-a-year program to repair neighborhoods and city parks, promised to obtain 20 percent of the electricity used by the city from clean and renewable sources, and converted hundreds of abandoned and contaminated properties into new businesses.”

Looking For A Great Mayor: Lessons From Denver