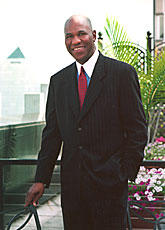 Mayor Herenton finally met his match last week when he bowed out of his latest campaign for school consolidation. In acknowledging that his presence is a lightning rode for controversy, he threw in the towel. But his defeat was as much a surrender to the media as to the anti-consolidation forces arrayed against him.

Unfortunately, we live in a world where the media tend to make every one one-dimensional. That way, they create a shorthand for each leader and celebrity. They end up suggesting that a single characteristic is the essence of a person. Of course, it never works that way in real life, where each of is a mass of complicated contradictions.

But in such a world, Mayor Herenton is easy pickings. He’s the irascible mayor, the bomb-thrower, the contentious former Golden Gloves fighter. Everything he does gets defined by conflict, and most things that don’t convey this image are ignored. It’s sort of like the bigot who only sees things that reenforce the stereotypes that he already holds.

The perfect example of this tendency took place in March when Mayor Herenton convened a group of leading citizens to evaluate the benefits of school consolidation. In that meeting, Mayor Herenton laid out the most thorough analysis of city and county schools that has ever been presented in a public meeting.

None of it was reported.

The complaints from the elected school board members immediately became the story. What did they say about Herenton? What did he say about them? Who really cared?

Lost in the extensive coverage about conflict was substance – the information that Herenton had presented on schools. As a result, Shelby County citizens – most of whom live in Memphis — never learned that so much of their conventional wisdom about schools is simply wrong.

In fact, the report showed that county enrollment had actually peaked in 1999 with 48,770 students. As for the city school district, it peaked this year.

Another interesting statistic spotlighted our community’s vast investment in public schools. Over the 10-year period, operating expenditures for Shelby County Schools were $2.2 billion, and for Memphis City Schools, it was $6.8 billion. In other words, the total amount spent on public education in this decade was an astounding $9 billion.

In fact, from 1995 to 2004, expenditures by each school district essentially doubled, raising questions that deserved to be discussed about the basis of yearly calls for more money for education.

Projecting Memphis’ annexations over the next 15 years, city enrollment is expected to grow to 132,000 students while county schools will continue to shrink, to 33,000 students.

Another interesting tidbit dealt with the county’s huge debt, which is so often characterized as being school construction debt. Actually, $913 million of the debt comes from schools; the rest of the $1.7 billion comes from projects ranging from arenas to hospital expansions, from new roads to new technology.

While Mayor Herenton’s proposal that day was branded as a consolidation push by critics, actually, he proposed five districts with approximately 41 schools in each with 32,000 students. It was hardly the proposal of a maniacal power grab, and essentially, it is a proposal whose roots run back almost 20 years to when former Shelby County Mayor Bill Morris proposed almost the same structure for city and county schools.

All in all, it was a stimulating, challenging and thought-provoking presentation. Unfortunately, it was ignored by the media, and that’s too bad, because it deserved serious thought, discussion and debate.

With no one watching, the group convened by Mayor Herenton was subsequently hijacked by the town mayors who seemed intent on making sure any proposal to change county schools was D.O.A. While the town mayors give schools lip service, their actions never match their rhetoric. Unlike Memphians, who have funded city schools for decades, none of the towns has ever appropriated a penny to the county schools of which they are so boastful.

Although the city mayor has now taken himself out of the picture, the committee he convened has turned its attention to school funding. If it really wants to accomplish something, it shouldn’t look at school funding in isolation. It should start at the same point Mayor Herenton did – with the emphasis on equalizing the unfair tax burden that Memphians pay for public services.

As Mayor Herenton pointed out in his March presentation, Memphis taxpayers paid cumulative city-county property taxes of $7.27. Meanwhile, taxpayers in Germantown paid $5.79; Collierville $5.54; Bartlett $5.47; Millington $5.32; Arlington $5.09 and Lakeland still pretends to be a city, but has no city property taxes and pays only county taxes. (With the recent property tax increases, the onerous burden on Memphians has only grown.)

Equalizing the tax burden between citizens of the various sections of Shelby County would be the stuff of real progress. Until the property tax rates become more equal throughout Shelby County, Memphians are paying a disincentive to live in the city limits, while paying for infrastructure in sprawling areas of the county that they will probably never even visit.
Mayor Herenton’s proposal modestly called itself “a new beginning in reform, academic excellence and financial accountability for the public education of all children in Shelby County.” Hyperbole aside, it was a proposal that deserved better treatment than it received. But such is the case when the media operate in a one-dimensional world where personality conflicts always seem to trump serious discussion of real issu

Smart City Memphis Makes List Of "Most Engaging Blogs" Of 2007