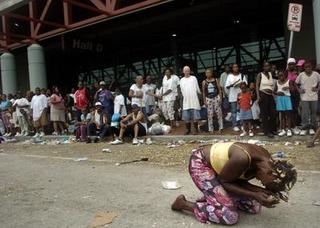 It’s been a historic week for the news media covering Hurricane Katrina. They have discovered poor, black people.

There is widespread outrage about the deaths directly caused by the failure of our federal government to mobilize its massive resources to save those whose lives hung in the balance in the murky floodwaters of New Orleans. Questions are being asked about whether the federal government’s slowness in responding was racially-motivated or colored by a systemic lack of concern about poor people.

For now, all of America is infuriated by the treatment of the least among us, but where were the media when questions should have been raised about policies that keep millions of Americans living in the shadows of the greatest wealth-producing country in the history of the world?

Surely Edward R. Murrow is turning over in his grave. Where were the media when it came time to spotlight the most troubling problems of our democracy – the entrenched poverty that is a birthright for millions of our citizens, the kind of poverty that played out before the world on television screens all of last week?

Katrina has forced the ugliest realities of our cities out in the open. Our anguish is now focused on whether the poor in New Orleans will survive the intolerable conditions there. But where is the anguish about why these conditions exist in the first place? Where is the reporting about the economic poles that exist in the United States, with the greatest discrepancy between the richest and the poorest in history? Where are the investigative articles about the rising rate of poverty and the falling median income in America? Where are the questions about tax policies that create a permanent underclass in our midst?

It is an underclass that stays largely invisible to most of us. We don’t drive or shop in their neighborhoods, so we can conveniently forget that they are even there. There is a resignation that the problems that now float before us on the flood waters of Katrina are an accepted part of American culture. That acceptance played out in the faltering response to the crisis in New Orleans last week.

We spend hours every night for weeks tracking the tragic murder of a beautiful Alabama teenager in Aruba, we spend days upon days examining every moment of Scott Peterson’s life and we spend months and months tracking every movement that Martha Stewart makes. But the evening newscasts and daily newspaper coverage do little to shine a light on the caste system that is all but institutionalized in our country.

Yes, we are outraged today. But where was our rage yesterday and where will it be tomorrow?

For now, reporters ask a pressing, appropriate question: was the federal government’s lack of urgency driven by race and economic status? It is a question that has to be answered, but there is an equally important one that we should consider thoughtfully as a people: why is it that every African-American in the country is convinced that it was?

Baptist Ministerial Association Finds It Impossible To Love Thy Neighbor