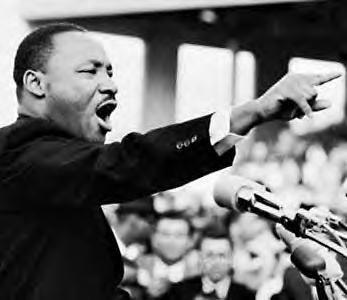 Thumbnail: Dr. Martin Luther King’s example and words are as pertinent today as they were during his lifetime.  Rather than quote Dr. King to support whatever position we want to take – conservative or progressive – we need to remember him for the revolutionary that he was and draw courage to demand more of our community than business as usual.

It’s like the watered down version of Jesus so prevalent in Christianity today – no longer a revolutionary attacking the established order or advocating for the poor, the marginalized, the imprisoned, and the immigrant – he is transformed by evangelists to rationalize blind capitalism, persecution of the other, and the use of Bible as a cudgel to attack others.

Today, we rarely hear about Dr. King’s willingness to pursue a heightened level of confrontation and to reject the language of American exceptionalism while calling for meaningful resistance.  In the last year of his life, he was clearly in the midst of an evolution, and it is painful to imagine how different America might be if the revolutionary Martin Luther King Jr. had lived.

It is an irony of the Christianization of slavery that while white society was pushing paintings of a European, rather than a Semitic, Jesus, the African American ministers of the day like Dr. King saw Jesus for what he was – a dark-skinned revolutionary – and a century later, they saw Dr. King for what he was – an insurgent and resistance fighter.

Today is also a day to reflect on other thinkers whose philosophy inspired Dr. King and who are inspired by him today.  Our own Ida B. Wells: “That (the Memphis lynchings) is what opened my eyes to what lynching really was – an excuse to get rid of Negroes who were acquiring wealth and property and thus keep the race terrorized.”

White Memphis often acts incredulously when confronted by the fact that its African American neighbors are disturbed and angry about the income and opportunity inequality that remains built into the local economy.

The statistics tell a story of too little progress for too long, and today, Dr. King’s life reminds us that accepting the status quo is often unthinkable.  That is the lesson of his life we should honor today.