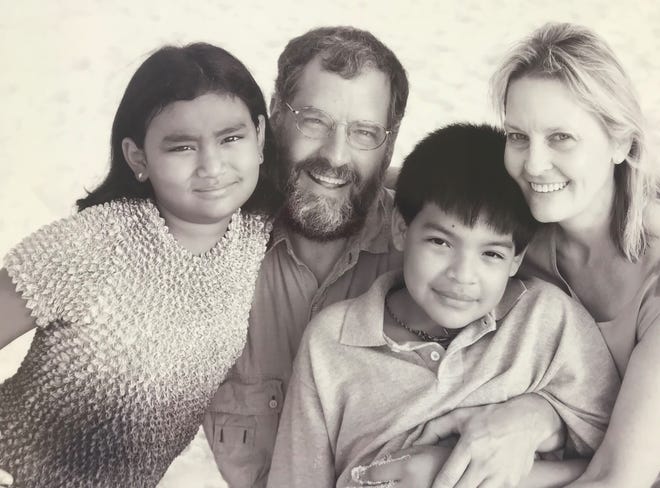 Thumbnail: It’s hard to find meaning from tragic deaths like Steven Montgomery’s last week, and in the midst of our shared grief, we have the eulogy by Rev. William Sloane Coffin that Steve would have had us read today.  Our condolences to his wife, Patti; daughter, Sumita; and son, Aaron (A.J.).

After our 32-year-old daughter died and Rev. Steve Montgomery led the funeral, we received a few days later a letter from him, which included a eulogy by Reverend William Sloan Coffin, civil rights leader, anti-war activist, and senior pastor at Riverside Church in New York City.

The eulogy was for his son, Alexander Sloane Coffin, a college student who had died in a traffic accident.  It is poignant, theologically powerful, and wise, and it is a window into the inexplicable, deaths like our daughter’s – and now like Steve’s.

In the midst of unbearable grief, Steve said the eulogy could bring comfort to those of us in pain.  Today, so many of us are in pain because of his death.  I have no doubt that if he were here today, he would suggest this eulogy to us.

Eulogy for Alex by Rev. William Sloane Coffin (italics are mine):

As almost all of you know, a week ago last Monday night, driving in a terrible storm, my son — Alexander — who to his friends was a real day-brightener, and to his family “fair as a star when only one is shining in the sky” — my twenty-four-year-old Alexander, who enjoyed beating his old man at every game and in every race, beat his father to the grave.

Among the healing flood of letters that followed his death was one carrying this wonderful quote from the end of Hemingway’s A Farewell to Arms:

“The world breaks everyone, then some become strong at the broken places.”

My own broken heart is mending, and largely thanks to so many of you, my dear parishioners; for if in the last week I have relearned one lesson, it is that love not only begets love, it transmits strength.

When a person dies, there are many things that can be said, and there is at least one thing that should never be said. The night after Alex died I was sitting in the living room of my sister’s house outside of Boston, when the front door opened and in came a nice-looking, middle-aged woman, carrying about eighteen quiches. When she saw me, she shook her head, then headed for the kitchen, saying sadly over her shoulder, “I just don’t understand the will of God.” Instantly I was up and in hot pursuit, swarming all over her. “I’ll say you don’t, lady!” I said.

For some reason, nothing so infuriates me as the incapacity of seemingly intelligent people to get it through their heads that God doesn’t go around this world with his fingers on triggers, his fists around knives, his hands on steering wheels. God is dead set against all unnatural deaths. And Christ spent an inordinate amount of time delivering people from paralysis, insanity, leprosy, and muteness. Which is not to say that there are no nature-caused deaths — I can think of many right here in this parish in the five years I’ve been here — deaths that are untimely and slow and pain-ridden, which for that reason raise unanswerable questions, and even the specter of a Cosmic Sadist — yes, even an Eternal Vivisector. But violent deaths, such as the one Alex died — to understand those is a piece of cake. As his younger brother put it simply, standing at the head of the casket at the Boston funeral, “You blew it, buddy. You blew it.” The one thing that should never be said when someone dies is “It is the will of God.” Never do we know enough to say that. My own consolation lies in knowing that it was not the will of God that Alex die; that when the waves closed over the sinking car, God’s heart was the first of all our hearts to break.

I mentioned the healing flood of letters. Some of the very best, and easily the worst, knew their Bibles better than the human condition. I know all the “right” biblical passages, including “Blessed are those who mourn,” and my faith is no house of rest, came from fellow reverends, a few of whom proved they knew their cards; these passages are true, I know. But the point is this. While the words of the Bible are true, grief renders them unreal. The reality of grief is the absence of God — “My God, my God, why hast thou forsaken me?” The reality of grief is the solitude of pain, the feeling that your heart is in pieces, your mind’s a blank, that “there is no joy the world can give like that it takes away.” (Lord Byron).

That’s why immediately after such a tragedy people must come to your rescue, people who only want to hold your hand, not to quote anybody or even say anything, people who simply bring food and flowers — the basics of beauty and life — people who sign letters simply, “Your brokenhearted sister.” In other words, in my intense grief I felt some of my fellow reverends — not many, and none of you, thank God — were using comforting words of Scripture for self-protection, to pretty up a situation whose bleakness they simply couldn’t face. But like God herself, Scripture is not around for anyone’s protection, just for everyone’s unending support.

And that’s what hundreds of you understood so beautifully. You gave me what God gives all of us — minimum protection, maximum support. I swear to you, I wouldn’t be standing here were I not upheld.

After the death of his wife, C.S. Lewis wrote, “They say ‘the coward dies many times’; so does the beloved. Didn’t the eagle find a fresh liver to tear in Prometheus every time it dined?”

When parents die, as my mother did last month, they take with them a large portion of the past. But when children die, they take away the future as well. That is what makes the valley of the shadow of death seem so incredibly dark and unending. In a prideful way it would be easier to walk the valley alone, nobly, head high, instead of — as we must — marching as the latest recruit in the world’s army of the bereaved.

Still there is much by way of consolation. Because there are no rankling unanswered questions, and because Alex and I simply adored each other, the wound for me is deep, but clean. I know how lucky I am! I also know this day-brightener of a son wouldn’t wish to be held close by grief (nor, for that matter, would any but the meanest of our beloved departed) and that, interestingly enough, when I mourn Alex least I see him best.

Another consolation, of course, will be the learning — which better be good, given the price. But it’s a fact: few of us are naturally profound. We have to be forced down. So while trite, it’s true:

I walked a mile with Pleasure,
She chattered all the way;
But left me none the wiser
For all she had to say.

Or, in Emily Dickinson’s verse:

By a departing light
We see acuter quite
Than by a wick that stays.
There’s something in the flight
That clarifies the sight
And decks the rays.

And of course I know, even when pain is deep, that God is good. “My God, my God, why hast thou forsaken me?” Yes, but at least, “My God, my God”; and the psalm only begins that way, it doesn’t end that way. As the grief that once seemed unbearable begins to turn now to bearable sorrow, the truths in the “right” biblical passages are beginning, once again, to take hold: “Cast thy burden upon the Lord and He shall strengthen thee”; “Weeping may endure for the night but joy cometh in the morning”; “Lord, by thy favor thou hast made my mountain to stand strong”; “For thou hast delivered my soul from death, mine eyes from tears, and my feet from falling”; “In this world ye shall have tribulation, but be of good cheer; I have overcome the world”; “The light shines in the darkness, and the darkness has not overcome it.”

And finally I know that when Alex beat me to the grave, the finish line was not Boston Harbor in the middle of the night. If a week ago last Monday, a lamp went out, it was because, for him at least, the Dawn had come.

So I shall — so let us all — seek consolation in that love which never dies, and find peace in the dazzling grace that always is.

This Week On Smart City: CarrotMob And Eight Trends

Defining Success by How Many Tax Freezes Are Handed Out