A Renewed Riverfront Park and a New Development Opportunity

Each of us has a favorite symbol for the momentum which we hear so much about in Memphis these days, but for us, the latest is the new, reimagined Mississippi River Park.

The completely transformed 2.4-acre riverfront park will be unveiled this weekend.  It is improved beyond recognition.  Gone is the passive, spiritless park that has been there for 68 years and in its place is a new kind of riverfront park – vibrant, diverse, amusing, and fun.

But the importance of the park is more than just the addition of special greenspace.  Equally exciting for us is the potential of the park to be leveraged for an exciting development opportunity to its north where the eyesore of a concrete plant once stood west of the entry road to Bass Pro Drive.

There are volumes of research that prove that the public values the chance to live adjacent to a park.  But it also benefits government, because property near parks have higher values which in turn means that they pay more property taxes.

The recommendation to get the highest and best use from the open land north of Mississippi River Park was made in 2013 by Jeff Speck, city planner, urban designer, and author of Walkable City: How Downtown Can Save American, One Step At A Time and co-author of Suburban Nation: The Rise of Sprawl and the Decline of the American Dream.

Mr. Speck was commissioned by former Memphis Mayor A C Wharton to conduct a comprehensive review of riverfront plans dating back to 1924 and to provide his suggestions for short-range action.  Two of these recommendations were to improve Mississippi River Park and to use the improvements as leverage to develop what he called the “Northern Blind Spot.”

“This area, formerly home to a concrete plant and parking, will be given new value by the beautification of Bass Pro Drive and seems an ideal location to open up for development,” he wrote.  Mr. Speck also suggested a better configuration for the boulevard and parallel parking to allow for the area between the “State Visitor’s Center and the I-40 ramps (to) be developed into urban blocks.”

He concluded that City of Memphis possessed more open space than “it can commit to properly amenitizing and maintaining.  It seems logical that limited city resources should be used instead to amenitize existing parks such that they attract and benefit users.  One way to help fund this effort is through the sale or lease of City land to be developed…”

Mr. Speck recommended that the four acres of open land north of the Mississippi River Park would be a prime location for medium density housing (with some mixed use) shaped as two to three urban blocks with a central parking alley running north south and buildings facing east to Bass Pro Drive as part of a development plan pre-approved by city government.

Meanwhile, on the opposite bank is the “Mud Island Blind Spot,” which Mr. Speck has the potential of configuring the marina to open up new high ground to the east.  “The proximity and similarity of this site and the Northern Blind Spot across the Wolf River Harbor suggest that these two sites might be developed at once in concert with a coordinated and reciprocal approach to designing the harbor between them as a shared amenity,” he said.

This exciting possibility suggested by Mr. Speck as a result of a better Mississippi River Park assumed only modest improvement there.  “Its prime location and small size make it a place where a reasonable investment could have a transformative effect in short order,” he wrote, adding that the Visitors Center’s oversized parking lot could serve the park as well.

Today’s Mississippi River Park surpassed his expectations, bearing no resemblance to what it was only five years ago – passive, listless, and spiritless — and even its name is not the same, shedding the moniker of Confederate warlord Jefferson Davis as one of three city parks whose Civil War honorifics were dispensed with. 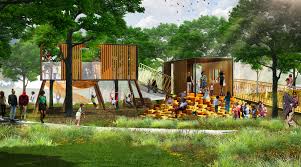 A Special Kind of Park

Somehow, to simply call this new place a park understates what it has become, a fanciful place that inspires our imagination and our joy.  Once essentially a meadow with perfunctory landscaping, it was a place to travel through.

Now, for only $1.6 million, it is a place to linger and enjoy its pavilion, tree houses, nests, and native plantings around a central lawn.  Then too, there is the enhanced view of the rivers flowing by Memphis’ front door.

That’s not to even mention Mississippi River Park’s place as an important anchor in the Fourth Bluff district.

All in all, it is a reminder of the economic benefit of parks and open space.  Too often, they are treated as budgetary black holes – consuming government revenues for a pleasant amenity but with little return to public budgets.

And yet, people prefer to live near parks, and as a result, property values are higher.  Research indicates that the values can be 20-33% higher as far as one-third of a mile away from the park.

It’s a direct way that parks matter, not just for their aesthetic and health benefits but for the way they produce more money for city and county budgets.

Waterfront cities across the U.S. have made – and are making – important investments in their riverfronts and in this way, Memphis is playing catch up.  While the renewed riverfronts are powerful brands that reintroduce their cities to the rest of the country and make profound civic statements, it has been well-documented that they also trigger increased investments in their downtowns.

For example, in San Antonio, this has amounted to more than $3 billion and in Pittsburgh, it is more than $4 billion.

It could produce a similar economic jump start in Memphis, and it can begin just north of the reimagined Mississippi River Park as a return on the Bass Pro Shops investment made by the people of Memphis.

Note: In the interest of full disclosure, we recommended the hiring of Mr. Speck and were the liaison between him and city government.