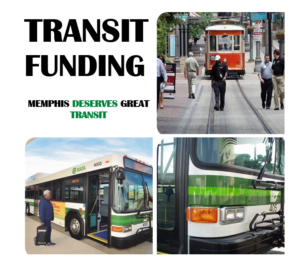 My grandmother often answered our latest whining request with the response: “if wishes were horses, beggars would ride.”  The updated version for our community:  If talk was money, MATA would have light rail to Somerville.

Either way, the message is the same.  Talk is cheap.

Unfortunately, that’s not true when it comes to public transit.  Rather, the cost of talk and no action is profound.

There is the necessity to buy a car when money would be better spent on other things.  There is the economic drag caused by the lack of connections to job centers.  There is the larger carbon footprint and threats to ozone attainment resulting from more cars on the road.  Then again, there are the many negative consequences associated with a car-centric lifestyle and policies.

And The Public Shall Lead Us

Improving public transit is an issue on which the public leads.

For the past 20 years (at least), the public has been calling for better transit and more funding to make it happen.  There was a call to action in 2008 with recommendations in Sustainable Shelby, the public said in scientific polling in Sustainable Shelby and City of Memphis Five-Year Strategic Plan in 2011 that they want more funding to be spent on making neighborhoods more livable and the city more successful – and effective public transit lay at the heart of achieving both.

Better transit has already surfaced often as a priority in the first community meetings for Memphis 3.0, and the public is saying it again right now in the survey being conducted by Innovate Memphis in the wake of the release of its report filling the information vacuum that regularly is missing in discussions about public transit and Memphis Area Transit Authority.

You can still participate in the survey here, but so far, the mandate is clear:

*  77% support a movement to provide MATA with a dedicated funding source – only 3% oppose it.

*  The top reasons people said they drive alone is because they need a car for their work and transit service is not convenient.

*  The most important factors that people say would encourage them to use public transit are accessibility, service from home to work, and safety.

*  The biggest barrier to ridership is that Memphians are looking for more home to work service.

For several years, Innovate Memphis – which was the Mayor’s Innovation Delivery Team during the administration of Mayor A C Wharton – has been leading the research and discussion about public transit.  Suzanne Carlson was hired as transportation and mobility project manager and moved from Chicago where she was providing advice to the Chicago Department of Transportation.

The good news is the Innovate Memphis report was also sponsored by the Greater Memphis Chamber, which, under its present leadership, is willing to step out front on issues that the business group would have traditionally given only lip service, if not avoided, in the past.  In addition, Innovate Memphis assembled a “transit funding working group” (disclosure: we were part of it) that also included activists, neighborhood groups, and others.

A broader understanding of what makes Memphis economically successful is key to our ability to find permanent solutions to MATA’s funding challenges.  And make no mistake about it, the chief reason that Memphis and Shelby County’s public transit is not better is simple – money.

To underscore the dimensions of our community’s need, consider that only about 12% of the jobs in the region are within a 30-minute public transit trip.  Within a half-mile of transit, there are 213,000 commuters, and yet, only 2.3% of commuters use MATA.

Meanwhile, 170,000 fewer people live within the 1970 Memphis city limits – a decline of 27%; annexation increased land 55% while population only increased 4%; population density is down almost 50%; 12% of jobs are in the Central Business District, ranking Memphis as one of three cities with the lowest employment in its core, and nearly 50% of jobs are 10 to 35 miles out and farthest from poor residents.

In Nashville, Governor Bill Haslam lobbies for an increase in the gas tax to fund infrastructure improvements.  That the definition of infrastructure regularly does not include public transit speaks volumes on how far we have to go, and while there are Democratic proposals to peel off part of the gas tax increase for urban public transit, their influence is modest compared to the massive lobbying machine that is the Tennessee Roadbuilders Association.

All Politics Is Local

We’ve previously written about our idea that MATA become a county agency funded by the largest tax base and we’re posted the recommendations from the Blueprint for Prosperity about how transportation can help reduce poverty.

In other words, we’ve been having conversations for years, but now, armed with the Innovate Memphis report, we have the opportunity to launch a movement with the material in the report acting as its fuel.  Our goal: $30 million more a year for MATA’s budget.

The response from many people anytime more money is suggested for a public service – from schools to transit to birth control – is that the problem won’t be cured with more money.  When it comes to MATA, that’s simply not true.

Contrary to conventional thinking, MATA is one of the most efficient public transit agencies in the country and is able to offer more service per dollar than almost all of its peer cities.  That’s why we should have confidence that more money will be invested in ways to deliver the greatest return on investment.

It all comes down to a dedicated source of funding for MATA, which “has no dedicated funding source, which means its funding is unpredictable and it relies on elected officials and grant makers for money year to year.  It has faced declining support, service cuts, and maintenance issues in recent years.  MATA operates on $84 per capita a year, where peer cities (our note: Nashville, Louisville, Jacksonville, and Charlotte) spend as much as $145.”

“The public transit deficit compounds a vicious cycle that essentially requires Memphians, regardless of their incomes, to buy cars to reach jobs and services that were once within walking distance,” the report said.  “In turn, governments respond by investing overwhelming in driving…Memphians will spend $31.3 billion on their cars over the next 30 years, most of which flows out of the regional economy.”

The conclusion: “Memphis and Shelby County regional leaders and citizens must come together around transit funding solutions.”  To accomplish this, we need both city and county mayors, city and county legislative bodies, MPO, mayors of every municipality in Shelby County to join hands to advocate for a public transit system that would benefit all of them.

Already, in Nashville, the mayor and Chamber of Commerce are leading a major effort to stabilize and increase transit funding.  Louisville is pursuing state authority for dedicated transit funding while using an employer payroll tax.  Jacksonville has a five cents a gallon local option gas tax as well as surplus sales tax and constitutional gas tax after those funds pay off city bonds.  Charlotte has a one cent local sales tax dedicated to transit.

So, what exactly do we need to do?

*  Implement MATA’s Short Range Transit Plan by Spring, 2017.  This would create a strong core set of services, or network “backbone,” and build the rest of the network around it.  It reduces redundancies in the network, provides a clear and simply strategy for south Memphis and strengthens north-south connections, recommends eliminating many service branches, straightening routes, and scheduling services according to consistent headways.  By simplifying the service, the preferred alternative also creates a structure that makes it easier for MATA to expand or contract services as budgets require.

So what exactly does it all mean?  That there’s no time to waste and we need to begin now with a sense of urgency to improve MATA by increasing its funding so we can have a public transit system that is competitive, high-functioning, and an advantage in attracting jobs and people.

It’s time to stop all the talk and act.