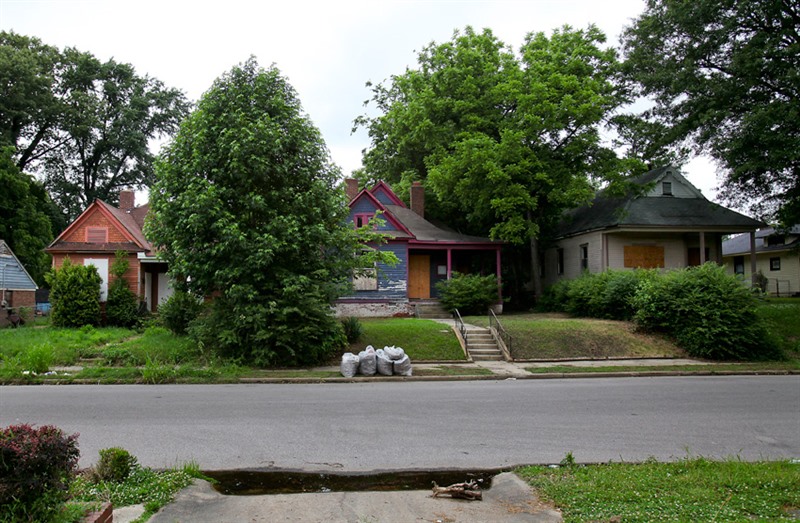 The “breaking news” headlines go to the demolition of a long-abandoned motel near the eastern end of the Memphis & Arkansas Bridge that’s been a high visibility eyesore for decades, but the work to fight blight with the most impact on the city at large is under way at the neighborhood level.

There’s never been more blight-related activity in the history of Memphis.

There’s the creation of the Blight Authority of Memphis, a land bank created late last year for the city and that can be a major weapon in the future. Vested with more power than traditional land banks, the Blight Authority can drive neighborhood redevelopment by selling land to pre-approved buyers with development plans, it can assemble property for larger development, or it can bring actions that cut through a morass of ownership claims to get property cleaned up.

Meanwhile, city, county, state, and federal officials signed the “Memphis Neighborhood Blight Elimination Charter” setting out their shared goals, plans, and promises to work together.   The charter said that “doing more of the same will only produce the same unacceptable outcomes we’ve endured for decades,” so it has set out to change things, and a special team is developing and executing an “action plan,” according to Memphis lawyer Steve Barlow, whose Neighborhood Preservation Inc., advocacy group brought the disparate groups together to produce the charter.

The Saint of Blight

If there is ever a patron saint of blight in Memphis, it will have Barlow’s face. It seems that he is everywhere, spreading his social gospel that blight holds back Memphis families, neighborhoods, and economic growth. With more than 13,000 structures or vacant lots in Memphis that qualify as blighted, he has made fighting blight his life’s work.

The recent burst of activity is the culmination of Barlow’s 20 years of work in Memphis neighborhoods, medical center, and downtown. He moved to Memphis in 1994 for a graduate degree in applied anthropology at University of Memphis, and a year later, he worked on a research project in LeMoyne Gardens. “I started to understand the challenges facing urban neighborhoods in Memphis,” he said.

It wasn’t his first face-to-face encounter with the realities of urban poverty. As a student at Moody Bible College in Chicago, he had seen the worst of the worst. His community service requirement resulted in work in Chicago’s Cabrini-Green, where 15,000 people were jammed into the high-rise housing projects known for crime, gang violence, neglect, and deplorable living conditions. “That was my first up close and personal exposure to poverty and substandard housing in the United States,” he said.

After graduate school in Memphis, he became a community organizer in Binghampton and Peabody-Vance before working for five years at LeMoyne-Owen College Community Development Corporation while he attended law school. He would form his own law firm in late 2006, and “that launched me into what eventually became what I do today,” he said.

Barlow’s thoughtful, unflappable demeanor and lack of interest in grabbing headlines make him the perfect partner for politicians whose support are crucial in fighting blight. “I am most proud of the positive relationships that I have been able to maintain over time across the community,” he said. “I believe the work that I do is mostly about relationships that we have with each other as we attempt to make things better together.”

As his example, he pointed out that of 1,000 parcels in the Medical Center, 300 are empty. “What could happen if we removed the barriers to redevelopment?” he said, adding that fighting blight is also “about helping people stay in their homes in their neighborhoods for equity and social justice reasons.”

Those reasons aside, enlightened self-interest should motivate Memphians to wish him luck. While Nashville’ lower tax rate is regularly held up as proof of mismanagement here, it’s really all about the math. If that city had the same house values as Memphis, it would have a similar tax rate. Conversely, if Memphis could “grow the business” by increasing its house values to Nashville’s level, it would have the capital city’s low tax rate.

That potential for lower taxes, more than anything, should inspire the broad support for blight strategies all over Memphis.

This was originally published in the June issue of Memphis magazine as its City Journal column.