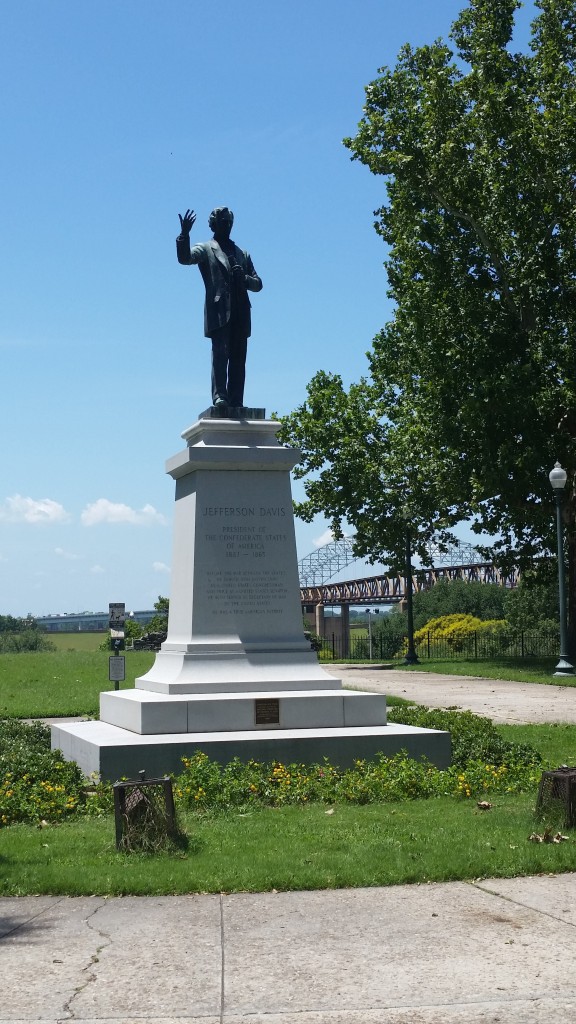 Now that we are intent on burying one racist artifact by sending Nathan Bedford Forrest back to the cemetery and shipping off his statue, can’t we also throw in the statue of Jefferson Davis in a downtown park as part of the deal?

While the park has a new name – Memphis Park rather than Confederate Park – it still acts as the Rebel attic for a hodge podge of Confederate tributes, including the statue of the first and only president of the Confederate States of America.  While most of Memphis’ Jim Crow monuments were put in place shortly after the 20th century began, the Davis statue was not erected until the 1960s, apparently as a direct response to the growing power of the civil rights movement.

It’s a troubling reminder of the hostility and hatred tha lay at the heart of decisions to honor and keep honoring soldiers fighting to maintain an economy built on the backs of slave labor at slave labor camps, plantations painted over time with a brush of sentimentality and fiction.

It could almost be humorous to watch the pretzel logic exhibited by the defenders of the Confederacy, ranging from the South wasn’t really fighting for slavery, it was fighting for state’s rights (true, the right of the states to have slavery); the battle flag is just a tribute to the courage of these brave soldiers (in the same way the swastika is a tribute to the courage of German soldiers), and these are our relatives and we don’t want them to be forgotten (our relatives also served in Confederate uniforms but we remember them as members of our family, not as heroes (since it’s hard to work around the fact that they were fighting so people could remain property).

But it’s not remotely funny.  These monuments are ugly reminders how those in power use their privilege to humiliate minorities, to pass laws that prevented black Americans from accumulating wealth, and to praise those who would have destroyed the United States as we know it today.

Strangely, in listening to the flimsy defenses of Confederate monuments, it is easy to come to conclusion that the defenders see themselves more as descendants of Confederates than as citizens of the United States, and as a result, they made the conscious choose to perpetuate the divisiveness of the Civil War and make their lives’ purpose the elevation of a lost, traitorous cause until it has no resemblance to the facts.

Apparently, it was in the pursuit of their revisionist history that someone in 1960s audaciously  carved the following into the downtown statue of Jefferson Davis: “He was a true American patriot.”  That the statue was erected in the same era that saw Dr. Martin Luther King’s murder in Memphis, and that even today, we have no statue of Dr. King speaks volumes on the power structure and its motivations at the time.

The statue was placed downtown six decades after Confederate Park was created – at roughly the same time as Nathan Bedford Forrest was buried in the Medical District park and a statue was added as a cherry on top.

Thumb In The Eye Of Unity

A friend told us this week that in a history of Memphis that he was reading recently, the explanation for Forrest Park was that in the first few years of the 1900s, Memphis had gotten its balance back after the devastating yellow fevers in 1878 and 1879 that resulted in 30,000 of the 50,000 Memphians fleeing the city.  Of the 19,000 who stayed, 17,000 came down with yellow fever and 5,150 died.

Prior to the yellow fever epidemics, Memphis was home to large numbers of middle and upper middle families and a substantial underclass that has characterized it from its earliest days.  During the epidemics, people with means moved, and by the end of the epidemics, it was poor African Americans, Irish, and others without means who were left here.  (In fact, some of the “old” families in Atlanta, Nashville, and Cincinnati whose roots run to Memphis.)

With the dawning of the 20th century, the cause of yellow fever was determined, the city gained notoriety for inventing the modern sanitation system, and it started its road back.  It is written that the city fathers wanted to drive a stake in the ground that said unmistakably that Memphis was back and that its future would be as a proud Southern city.

In that way, the Forrest statue and Confederate Park were ways that the message could be sent not just externally, but internally to let minorities know that although they had stuck with the city during its bleakest days, they should not get any big ideas that things had fundamentally changed.

Make The Park Worth The Trip

But that was then, and this is now.

If there is a place for the statue, the bust of Confederate captain, a history of Memphis during the Civil War, and a historic marker, it shouldn’t be downtown at the precise time that Memphis is trying to convince young professionals in particular that the city is not stuck in time or trapped by outdated, discredited historical events that have no relation to who we are today or the values that we have as a city. 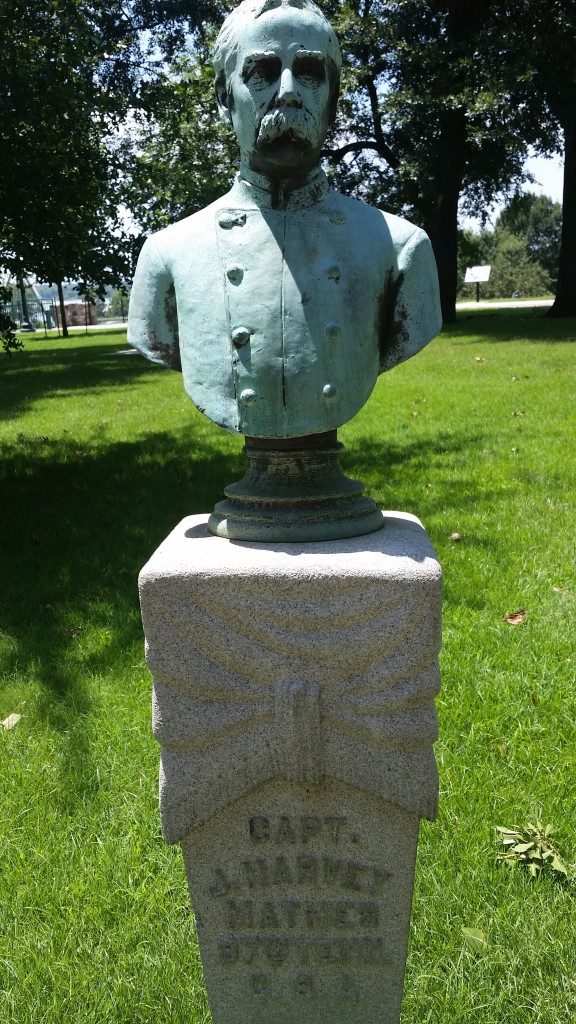 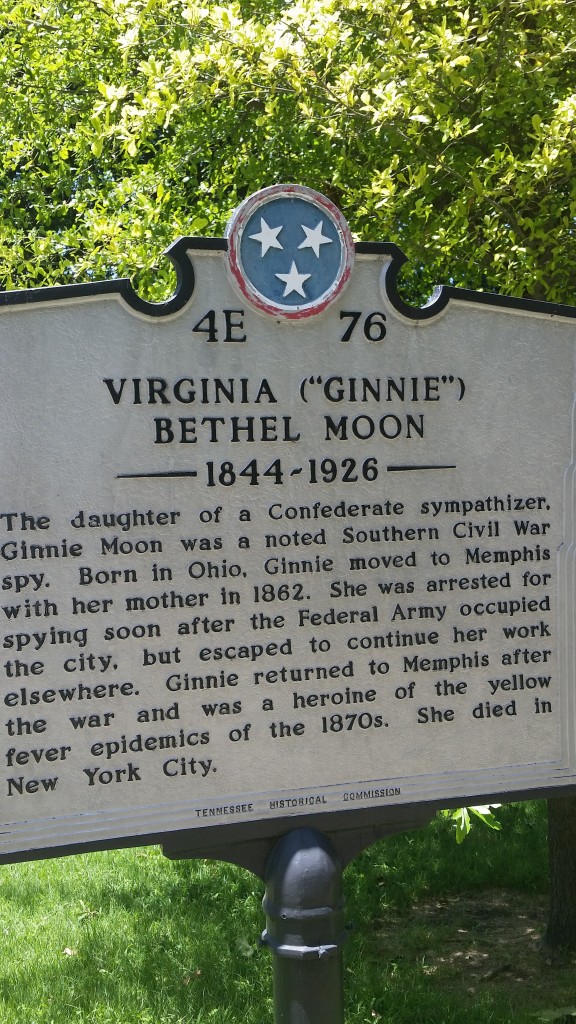 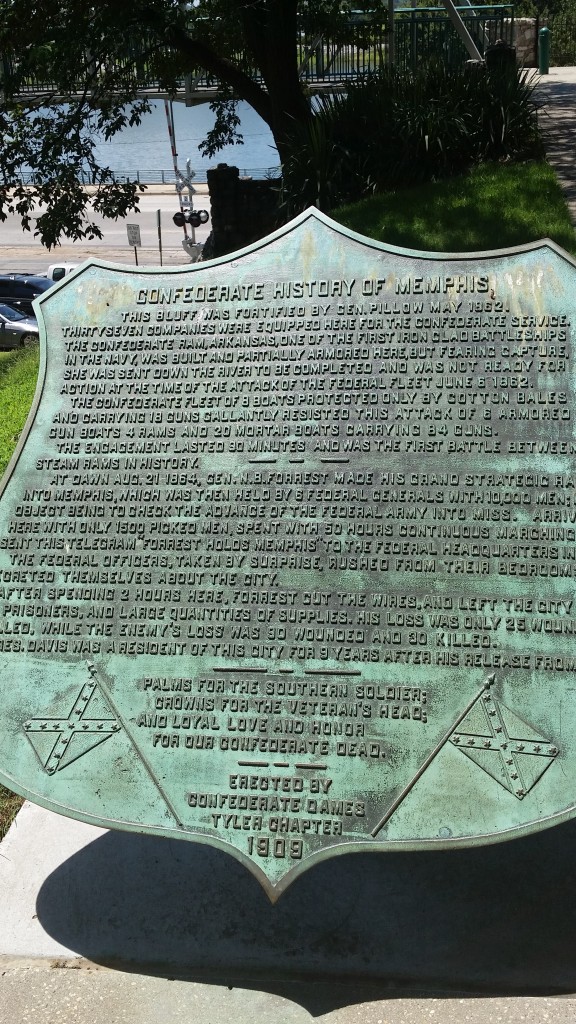 More to the point, changing the names of the parks is merely cosmetic.  Once we get the properly named and removed the Confederate viscera, Memphis has to develop a plan to make the parks attractive and appealing, bringing more people and more activity into them.  Between City of Memphis, Downtown Memphis Commission, and Riverfront Development Corporation, it would seem that someone would step forward to make this happen.

For example, one of the strangest things we’ve noticed about Memphis Park (aka Confederate Park) is that despite the charming bridge at its southwest corner connecting it to the University of Memphis Law School, it’s rare to see any students in the park despite beautiful views of the Mississippi River.  While visiting Memphis Park recently, we realized that there’s no wi-fi there, and if there’s one draw that would help pull students into the park, it would be the opportunity to access wi-fi in the park so they can use their lap tops, tablets, and devices to work on homework and class assignments.

It seems that often our public spaces aren’t activated when there are some simple things that can be done to help make that them more inviting and interesting.  For example, we need to bring visitors to Bass Pro Shops and the Tennessee Welcome Center up the bluffs and into downtown, but standing at Mississippi River Park (formerly Jefferson Davis Park, which is down the bluffs west of Memphis Park), there’s nothing that grabs a visitor’s attention or spurs them to walk up the bluffs.

Speaking of simple solutions, a suggested that activity could be generated there and at other downtown locations (Civic Center Plaza, for one) by installing tables, chairs, and umbrellas. It’s the kind of thing seen all over Europe in parks and in front of Hotel de Villes in France and municipio buildings in Italy and reclaimed public space in New York City.

Imagine something similar at the back (the west side) of the law school facing the river.  Today, there is only the moribund loading area and parking spaces.  And yet, there is a strip of grass that would be perfect for the tables and umbrellas, and where food trucks could supply the food and drink. 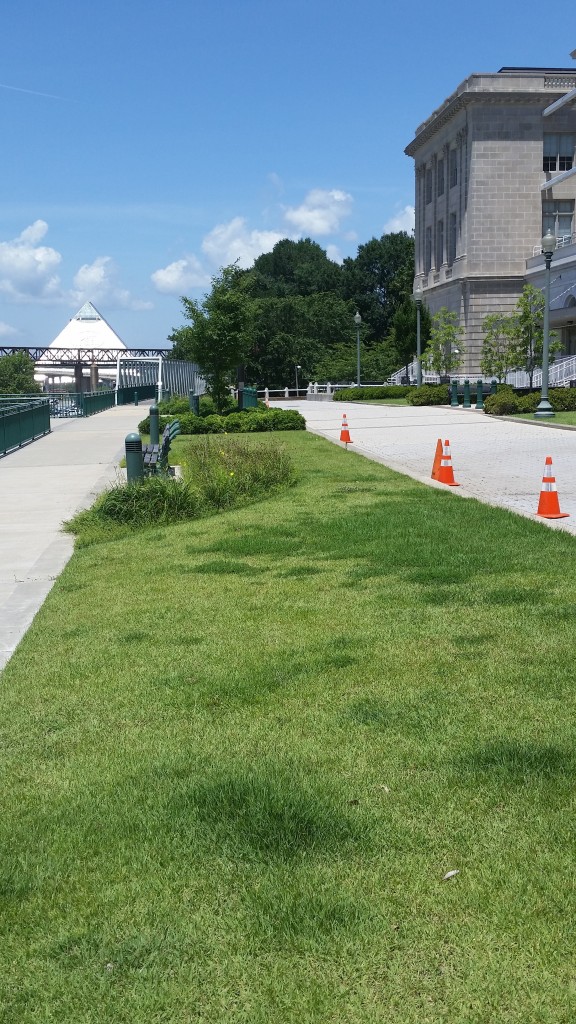 There are spectacular views of the riverfront behind the Law Schools – which unfortunately seriously underperforms as a source of activity for downtown.  It remains a classic example of how downtown Memphis turned its back to the river, and despite a magnificent renovation  (don’t try to walk through the building to see it though – you can only do that with a guided tour at noon weekdays), the Law School does nothing to entice people to the riverbluffs behind it.

It would exciting for the University of Memphis to prove that it understands how to activate the neighborhood and perhaps, students and other downtowners would even be enticed to walk across the bridge into a decluttered, well-programmed Memphis Park that becomes the model public realm that we all want it to be.

Protecting Yet Another Billboard in a Memphis Neighborhood

Asking the Right Questions About Memphis