Why has Melbourne grown faster than Sydney?

Sydney is Australia’s acknowledged global city and main finance centre, yet despite hosting the Olympic Games, Sydney’s growth since 2000 has been much slower than Melbourne’s

A recent paper by Professor Glen Searle (UQ) and Professor Kevin O’Connor (UM) says Melbourne has performed better on a number of key metrics than Sydney since 2000.

Both employment and population grew faster in the southern city, they say. For example:

Melbourne lost more ground in manufacturing (and this will be reinforced by the headline losses this year). Yet the great bulk of jobs in any city are much the same because they service the local population; Melbourne’s key advantage over the period was its higher net population growth.

The authors put a lot of weight on housing costs to explain the relative performance of the two cities, pointing out that an outer suburban (greenfield) house in Melbourne costs two thirds of one in Sydney.

Housing construction didn’t keep pace with population growth in either city but Melbourne did much better:

Victoria experienced a supply deficiency of 17,600 dwellings in relation to underlying demand between June 2001 and June 2010. But NSW’s deficiency over the same period was 73,700, indicating that housing construction in Sydney fell significantly short of population growth.

As I’ve explained before, a 2010 study of dwelling costs by the National Housing Supply Council found it cost $561,000 to deliver a typical three bedroom house and land package on Sydney’s fringe. That’s considerably more than the $375,000 it cost in Melbourne.

The difference is mainly down to Sydney’s constrained geography and high developer charges. The cost of raw land in Sydney at the time was $152,000 per lot on average, compared to $50,000 in Melbourne. Further, developer contributions were almost $60,000 per lot lower in Melbourne.

Infill housing is more expensive in Sydney too. The Council’s study found a typical two bedroom apartment within 2-10 km of the CBD cost $554,000. In Melbourne, a comparable apartment cost $490,000. (1)

Although they don’t explore them, the authors speculate that Sydney’s complex planning rules, “relatively worse transport system”, and poorer investment attraction programs might also have contributed to its lesser performance over the period.

They also suggest Melbourne’s “laneways and trams” are part of the explanation:

More generally, it seems that Melbourne’s underlying geography is now starting to be an advantage in competition with Sydney. It’s less expensive and more easily developed urban fringe reduces land costs for housing, logistics and other uses. Melbourne airport’s location does not necessitate a curfew, unlike Sydney’s. The European quality of the built form of Melbourne’s central areas, such as its laneways and trams, has also captured the zeitgeist of Generation Y and helped make it Australia’s preferred destination for aspirational young professionals. These are all significant features that will keep Melbourne very competitive with Sydney.

Although Sydney is clearly Australia’s global city, Melbourne also has formidable strengths. It regularly ranks in lists of top financial centres like Richard Florida’s Global Economic Power Index (although behind Sydney). It benefits enormously in terms of legacy institutions from having once been the country’s national capital (1901-1927) and at one time its major commercial centre.

The fortunes of cities are primarily shaped by factors like geography, history and wider economic and structural changes. But they’re also shaped to an extent by factors within their control.

Sydney suffered dysfunctional (state) government over much of the period considered here and depressed conditions in its global business sectors. All levels of government have also struggled with major infrastructure issues like a second Sydney airport. But Sydney can, and very likely will, do better.

Sydney: why this city would be better off without its world famous harbour

Paris, Rio, Venice, Cape Town; some cities conjure up an instant image, either natural or manmade, for people who have never been there. Others, even very large ones, have no such handy reference point. How much more difficult is it for most outsiders to picture Turin, Guangzhou or Santiago?

Sydney is one of the most recognisable places on Earth, thanks to its famous city beaches and the two contrasting works of genius on the harbour, the magnificently functional bridge and the maddeningly dysfunctional opera house.

I can’t recall hearing Sydneysiders complain about its natural beauty or its manmade wonders – like people in most tourist-friendly cities they are more inclined to regret that they don’t take advantage of the obvious attractions on their doorstep more often. But I often wonder whether such brazen advantages also breed a certain unconscious complacency that makes Sydney a worse place to live than it might be if it had to work with the raw material of, say, Warsaw or Madrid. Or Melbourne.

Let’s keep this in perspective. For most of its inhabitants, Sydney is a wonderful home, regularly featuring among the top 10 in the (admittedly dubious) lists of the world’s most liveable cities. But its glaring inadequacies are rendered somehow more infuriating and intractable by the hackneyed image it offers to visitors. Tourism ads for Sydney almost invariably feature the landmark sites and little else. Contrast this with Melbourne, where visitors are obliquely enticed by the prospect of meeting sexy hipsters by going on treasure hunts and trailing giant balls of string through the city’s intriguing lanes. Its appeal is the quirky and unexpected, not the ragingly obvious (contrast also with South Australia , which seems keen to attract a niche market of visitors who enjoy gothic fantasies about sex, food and death – but I digress). 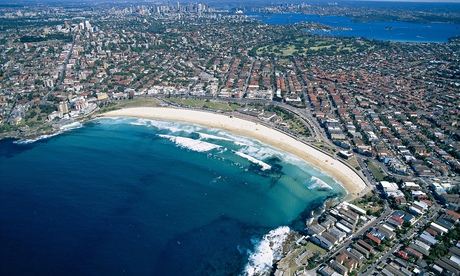 Bondi Beach – Sydney tries to appeal to tourists who want to do ‘obvious’ things like see the harbour and lie on the beach, rather than those seeking quirky or unusual sights. Photograph: David Messent/Getty Images

The harbour is a blessing for Sydney’s modelling shots of itself and for New Year’s Eve fireworks but a curse for urban planners. Sydney’s history and topography ensured that its commercial and political centre would be dramatically skewed towards the east, a good 12 miles (20km) from the geographical centre of the city’s population (currently lying somewhere around the suburb of Ermington, near Parramatta). Both intangible sources of power and tangible public services, such as railway lines, are funnelled inexorably into the narrow peninsula that runs down to Circular Quay.

As the harbour lost its industrial significance, formerly working-class suburbs near the water rapidly became highly desirable objects of gentrification, an extreme example of the process familiar to so many other cities in the developed world. Several factors lie behind Sydney’s insane property prices , but they reach their most wallet-dominating levels wherever water views, or even glimpses, can be offered. While recent development policy has encouraged the proliferation of apartments along transport routes and in suburbs closer to the city, Sydney is still about half as densely populated as London, and continues to sprawl to the north-west and south-west. If anything, the longstanding divide between east and west is only sharpening as it does so. It’s not a simple matter of rich and poor.

Andrew Merry’s extraordinary aerial photographs of new suburban developments on the western fringes reveal the huge size of some new houses (as well as the terrifying environmental potential of treeless streets, relatively tiny back gardens and car-only access). But there is no doubt the west as a whole feels ignored and patronised by the more scenic parts of the city. This feeling has recently been manifested in football, of all things, through the creation in 2012 of a new team for Western Sydney in Australia‘s A-League.

It has fed ravenously on hostility to the earlier established Sydney FC (based well and truly in the east) and its reputation for flashy arrogance. At one of the first derbies between the two, the Western Sydney fans held up signs marked simply with their postcodes, the Sydney Morning Herald noted, as “a cheeky pointer to places many Sydney FC fans have never visited”. The city’s political arrangements do little to overcome that divide and foster unity. 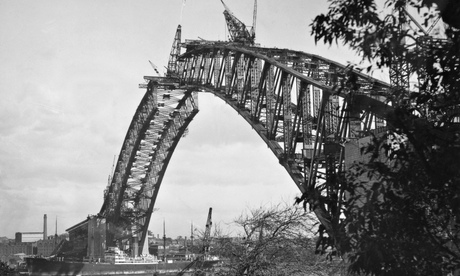 The responsibilities of the New South Wales state government naturally extend beyond Sydney, while the grandly titled lord mayor of Sydney presides over what is essentially a tiny local council, but one that includes the central business district. The current mayor, Clover Moore, a canny independent who has cultivated support among the gay community and other groups easily stereotyped as “inner city elites”, is an object of toxic hatred for rightwing radio hosts and Sydney’s News Corp-owned tabloid, the Daily Telegraph. Their fury has been directed particularly at Moore’s efforts to construct bike paths throughout the city, a classic issue that is assumed to divide the largely car-dependent west from inner-city trendies.

The lack of an overarching authority for the city may be one reason for its atrocious decisions on transport, which has left large parts of the suburbs (predominantly in the west) with very poor access to public options. A smartcard similar to London’s Oyster, unifying ticketing systems across trains, buses and ferries, was first announced in 1996, to be in place for the 2000 Olympics. The version that actually works is finally being rolled out this year.

The new federal government under Tony Abbott has slashed funding for new public transport projects, while encouraging more road building, meaning Sydney is likely to go further down the path of toll roads with charges that pay for their construction, rather than to manage the traffic flow – inner Sydney has no congestion charge, but you have to pay to use tunnels that keep cars out of the city streets.

The acclaimed Danish urban designer Jan Gehl has said Sydney is full of “good examples of what not to do” to make a city centre that is less abrasive and unforgiving to the people who live and work there. But even he has offered fewer ideas on how to turn attention away from the transfixing pull of the harbour.

Would it be easier to make Sydney a more coherent and less frustrating place if it was in a less glamorous location? It seems illogical but it’s hard to avoid the sense that cities without such obvious attractions make greater efforts to get the best out of what they do have.

They may not be such exciting places to visit but good planning, innovation, attractive public spaces, equality of treatment and decent transport matter more to the people who live there. Not convinced? Try asking someone from Melbourne.

• This article was amended on 18 February 2014. An earlier version had a picture caption which said the picture showed the harbour bridge under construction in 1920.