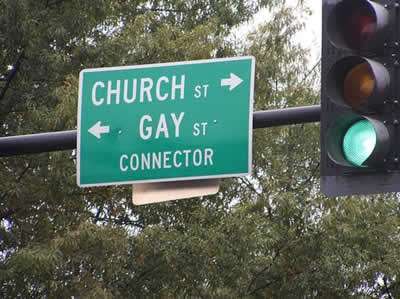 I remember sitting as a child in my family’s Southern Baptist Church while the preacher interpreted Bible verses to justify segregation and discrimination of African-Americans and how God was fine with the way things were.

I remember sitting in a congregation while the preacher quoted Scripture to prove that Catholics should never be elected president of the United States because they engaged in idolatry.

I remember sitting in another Southern Baptist church as the minister railed about the stain on the Jewish people because they had murdered Jesus and how they will go to hell if they don’t convert to Christianity.

Copernicus Mean Anything to You?

So, it’s absolutely no surprise that people are today sitting in the congregation at Bellevue Baptist Church listening to yet another Southern Baptist preacher, Rev. Steve Gaines, using his Bible as a hammer to stand on the side of discrimination and inequality.

We predict confidently that there will be a time when Mr. Gaines is viewed with as much disbelief as we now view Father Coughlan’s hate-filled sermons of the 1930s.  As Mr. Gaines obfuscates the meaning of Scripture and parses words to support his pre-existing prejudices, he joins other false prophets that were proven over time to be absolutely wrong in their theology.

History has a way of overtaking religious-oriented bigotry, from the Inquisition to the crusades, from bloody conversions to Christianity and slavery, and from anti-Semitism to Copernicus.  In other words, the Bible accepts things, including sexual behaviors, that we condemn today and we accept behaviors that it condemns.

The Bible is not a science book.  It is not a history book.  It is not a human sexuality book.  It is a sacred book.  It seems at times that those who tell us repeatedly that they have the most faith are the ones with the least, and because of it, they need everything in the Bible to be unquestioned, such as the age of the earth or the origins of humankind.

It’s a Tea Party theology that treats the Bible as if the interpretation of its verses hasn’t changed drastically over time nor that the culture and context of the time when it was written aren’t relevant in understanding them.  In the Pew Forum on Religion and Public Life, people were asked 32 questions.  Scoring highest were atheists and agnostics who averaged 20.9 correct answers.  Jews averaged 20.5 and Mormons 20.3.  Protestants meanwhile averaged only 16.

Most Christians have no historical context of how women were marginalized centuries after Christ in decisions that were more political than theological.  Most Christians don’t know that centuries after the books of the New Testament were written, church councils were being called to debate and decide whether Jesus was divine and if He was, to define the nature of that divinity.  There’s also the question of translations into English and decisions about what books would be included in the official canon.

As a result, it’s unsurprising that so many believers accept interpretations of the Bible with little understanding of their own or try to understand their meanings in keeping with the original Hebrew or Greek and within the context of their times as Israelites wandered and struggled for survival.  It was a time when strong conformity was needed because there were no prisons for a nomadic people, and as a result, death was the penalty of choice, for crimes ranging from murder, adultery, masturbation, cursing a parent, and to a false claim of a woman’s virginity at the time of marriage.

Curiously, the anti-gay Gospel preachers manage to ignore all of these inconvenient teachings – when’s the last time you heard a sermon against adultery or divorce?  – and obsess on the sexuality of a minority among us.  They take the story of Sodom and totally misstate the reasons for Sodom’s destruction, which is mostly about its citizens’ unwillingness to help the poor and those in need.  In ignoring the full context, many preachers engage in the worst kind of bigotry – the kind that objectifies and vilifies a subgroup in exchange for their special feelings of being the “real” Christians.

Methinks He Protests Too Much

The strangest thing about this fixation on other people’s sexuality is that it relies heavily on a questionable interpretation of a handful of verses that have other interpretations when the culture of the time is taken into account.  Yes, there are other more reasoned explanations when context, culture, etymology are taken into account.  More to the point, Christians are supposed to believe that Jesus’ gospel of love overrode the Old Testament, a fact often ignored by Mr. Gaines and others.

If homosexuality was a prime concern of the time, it’s strange that Jesus said nothing about it nor did the Jewish prophets, and while people like Mr. Gaines obsess on six or seven verses in one million to justify their political positions, none of these verses refer to same-sex orientation as it is today.

There are many people of good faith and deep faith who are wrestling with the angels of their nature and what preachers are telling them the Bible said.  Some feel that while they have no personal objections to gay relationships, they see the Bible as unyielding and unequivocal.  And yet, Christianity celebrates heroes who changed their minds about the meaning of various Bible verses, and even if we believe that the Bible is infallible, it’s still dangerous to assume that humans are too as they interpret what it says.

After all, the Bible says that it’s acceptable for a man to have sex with a prostitute but not for a woman to do it.  There’s also the small matter of polygamy, concubines, sex with slaves, marriage of girls at an age that Warren Jeffs would have envied, and women as property.

Christians are strong believers in the power of the Holy Spirit to move through history.  Perhaps it moves most effectively in providing us with the science to illuminate when teachings from the ancient world are no longer relevant to us today or require new interpretation because they were written for a particular time and place.  That’s why there are numerous verses of the Bible that even Mr. Gaines no longer considers appropriate to follow.

It’s confusing to us that so many fundamentalist Christian officials are transfixed by homosexuality while ignoring the Bible’s many admonitions for helping the poor.  As for the much-quoted Leviticus code, it was a code for a particular time and place.  It includes much of the sexual laws we ignore today but rather than focus on this broad fact, Mr. Gaines picks out a few words and amplifies them far beyond their actual meaning or importance.

More and more, we are finally leaving an untenable “don’t ask, don’t tell” world.  In times of great change in history, there is often a brand of extremism that does everything possible to resist and to attack the symbols of that change.  Gays are a convenient stalking horse for the fear of change, but there is no way that we should remain quiet in the midst of strident religious scapegoating of our homosexual neighbors, friends, and family members who are special blessings from God in our lives and in our city.

If people want to quote verses, how about the warnings about judging others?