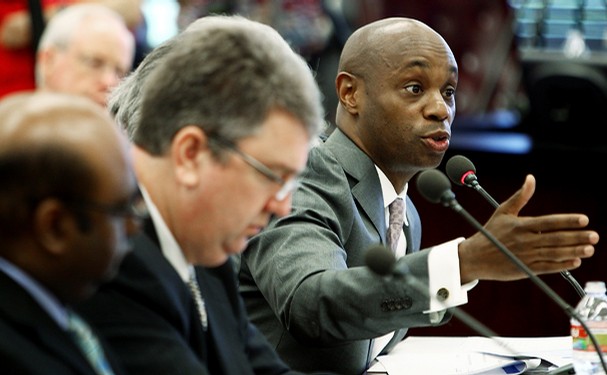 For 30 years, the tail has wagged the dog when it came to capital funds for local public schools.

That’s because the capital funding needs of schools in Memphis were always an afterthought – if they were thought of at all.

Year after year, decade after decade, Memphis City Schools only got money for construction and renovation of its schools if the old county school system needed it.

As a result, it will be a historic day at the Shelby County Board of Commissioners when Shelby County Schools Superintendent Dorsey Hopson presents his request for $52.6 million in capital funds, which includes $12 million for a new Westhaven Elementary School and $16 million to add 20 classrooms at Berclair, Wells Station, Chimneyrock, and Cordova elementary schools.

It will mark the first time in history that the needs of Memphis schools are front and center in a request for capital funding, and Mr. Hopson should be commended for the equanimity that forms his request, which also includes funding for new classrooms and renovations to Germantown High School, a new roof for Millington Central High Schools, and some changes in schools formerly in the former Shelby County Schools district.

For decades, the school funding deliberations before the county commissioners were all about how much money the former suburban school district needed for new schools.  It was never ever about the needs of Memphis City Schools.

And yet, because the state law on Average Daily Attendance (ADA) required proportional school funding for each student, every time the old Shelby County Schools district asked for money, it automatically triggered funding for the former Memphis City Schools (although Memphis City Schools waived the ADA requirements a couple of times as part of an agreement to build a school that ultimately would become part of its district).

For example, if the county district needed $30 million for new schools and it had 30% of the total public school students, it meant that Shelby County Government was required to provide the equivalent of 70% – or $70 million – for the city district because that was the percentage of the total students that attended its schools.  And yet, each appropriation for Memphis City Schools was accompanied by an emotional discussion by the county mayor and commissioners about the need to find a way to avoid the ADA requirements.

In fact, the funding required for the city system by state law was called a “windfall for Memphis City Schools” and “money city schools get whether they need it or not,” never mind that the district had approximately $400 million in verified capital needs.  It went unsaid that a number of city schools not only predated television but also radio, and three schools have been used for more than a century.

Lost in the debate in those years was the fact that one politically-connected developer was selecting almost all county school sites, which just happened to drive buyers to his nearby residential developments, and that Memphis and Shelby County’s own planners never were given the opportunity to review proposals for school sites and recommend land acquisition (which meant that decisions by the county school district were not made within the framework of adopted annexation policy or other public policies for that matter).

It’s more than a passing coincidence that the county schools district was the nexus between politicians and developers, and as a result, issues concerning county schools were characterized by bouts of hysteria mixed with an ever dependable sense of urgency, particularly when anyone suggests that more deliberative thought should be brought to bear on county schools’ decisions.

Looking back, it is hard to imagine another major U.S. county making school decisions as cavalierly or making them largely on the basis of politics, not planning.  But what was most astounding was that it was the smaller school district’s concerns time and time again that drove so many of these educational decisions for Memphis.

Finally, rather than being content to stand at the cash register and get whatever funds are sent its way when the county schools’ capital needs were addressed, we now have a school district that makes its case for schools in Memphis but also responds to the needs of the schools outside Memphis.

As a result, when Mr. Hopson takes his funding request to Shelby County Government, it will mark the first time in local history that a top school administrator presents the capital needs of public education in the most comprehensive way possible.

It’s past time to turn the local educational debate on its head. It’s past time to have a clearer picture of what schools in Memphis need to achieve their mission and for an educational vision that extends beyond the borders of the city.  Unfortunately, it will fragment again soon with decisions by the municipalities to go their own way with their own school districts after refusing to consider calmly and rationally that there may have actually been a way for a unified vision for public education to serve the interests of every student in Shelby County.

No ADA For Now

There is an irony in the upcoming request for capital funds.  For years, the loudest outcry from the municipalities called for an end to the ADA mandate because it required funding for Memphis City Schools.

Until July 1, there is no ADA requirement that would require proportional funding for the municipal school districts because there is for the first time, Shelby County Schools, lives up to its name.  It is countywide, but unfortunately, only for a year, and it is in that same year that the towns will pay a price for plunging into their own school districts, which reminiscent of the county commissioners’ debates about schools over the decades is more about politics than smart planning.