State of Tennessee unlawfully arrested members of the Occupy Nashville group two years ago during a protest encampment on War Memorial Plaza and violated their First Amendment rights to free speech, according to a ruling a week ago by federal Judge Aleta Trauger.

In the ruling, federal judge Aleta Trauger declared that state and local agencies did have not “carte blanche to respond in any manner they see fit.” In other words, “they cannot make law by fiat,” Judge Trauger wrote.  The lawsuit listed Gov. Haslam; Bill Gibbons, the state’s safety commissioner; and Steven Cates, the general services commissioner, as defendants. The plaintiffs, Occupy protesters who were arrested, include Paula E. Painter, 56; Malina Chavez-Shannon, 35; and others. They sued for violations of the First and Fourteenth amendments. The latter guarantees the right to due process.

Occupy protests spread around the country in 2011, mostly by citizens who were taking aim at the country’s income disparities and what they saw as an overly cozy relationship between federal politicians and Wall Street financiers.  In late October, state officials prohibited overnight use of the plaza for assembling, but protesters vowed to spend the night on the plaza despite the new 10 p.m.-6 a.m. curfew.  When protesters refused to leave, the Tennessee Highway Patrol arrested 55 people over the course of two nights on Oct. 28 and Oct. 29. The arrests ended after a federal court issued a restraining order, barring the state from enforcing the new curfew.

State officials could appeal the ruling to the Court of Appeals for the Sixth Circuit, though Smith did not say whether they plan to do that.  The ruling means that state officials must pay all the plaintiffs monetary awards and attorneys’ fees. The precise amount will be determined at a later date. 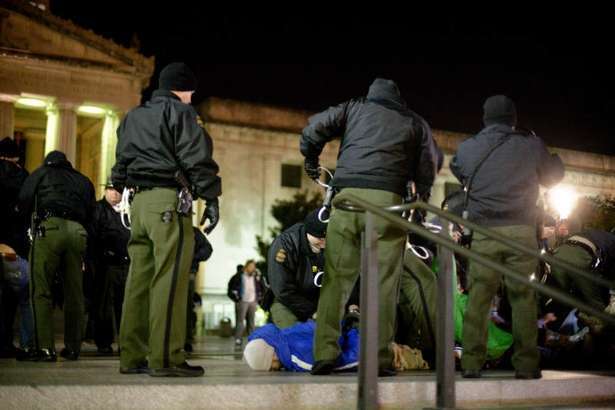 If there is a poster child for political groupthink, it’s the arrests provoked by the Haslam Administration of Occupy Nashville protesters.

If there is a poster child for the kind of courageous checks and balances too often missing from the judicial branch of government, it’s Nashville Night Magistrate Tom Nelson.

First, groupthink, a term created by social scientist Irving Janis 40 years ago.  It refers to bad decisions made because of group pressures that lead to deterioration of “mental efficiency, reality testing, and moral judgment.”  More to the point, group thinkers ignore reasonable alternatives and take irrational actions based on scapegoating other groups.

It’s the kind of faulty thinking that made Bay of Pigs, My Lai, Bull Connors, and WMDs synonymous with bungled decision-making, and now we can add the Nashville 29.

Groupthink is no stranger to government decision-making.  In Nashville, it just took place when an elected official – in this case, the governor – and appointed officials – in this case, Department of Safety and Homeland Security Commissioner Bill Gibbons of Memphis, General Services Commissioner Steven Cates, and Tennessee Highway Department officers – only talk to each other and create an artificial reality on which their decision is made.

In the Nashville debacle, it feels an awful lot like too much pumped-up testosterone and too little common sense – two ingredients of groupthink that surface regularly in the cocooned “we’ll show them” environment that surfaces in this closed circuit thinking.

In the end, we suspect that Governor Haslam and Commissioner Gibbons are like the guys who yell into a cave, hear their own voices, and think everyone agrees with them.  They also symbolize a tendency by politicians and bureaucrats to act as if they own public space instead of the public itself.

We suspect that despite the Administration’s lame statements about how security and safety led to its decision to make the arrests, the conversation in the cave in the Capitol was likely much more about “showing them who’s boss” and “we need to show them they can’t ignore us.”

This kind of groupthink is always amazing, because it so often results in the worst possible decision being made.  In Nashville, it played out with state politicians using the vast power of the state to intimidate and deprive their own citizens of their rights to assemble peacefully.

The Haslam Administration’s decision raises more questions than answers, and while there are some who chalk it up to the East Tennessee personality of the Administration and its unsophisticated understanding of how to deal with the urban issues in major cities, from K-12 education and early childhood interventions to family planning and higher education.

That said, we’ve seen this kind of behavior from politicians of all stripes and geographies, so we don’t want to overemphasize (yet) the Haslam team’s lack of experience with big city issues and the need for modulated policy-making.  This kind of nuanced understanding has not been shown by the Haslam Administration or Republican Party leaders in Nashville, and it shows in a number of key opportunities that have already been missed by faulty decision-making.

More to the point, the symptoms of groupthink are fueled by the extreme right, whose strident positions and loud rhetoric often veer more moderate Republicans in that direction too.  However, we’re not trying to justify the inconsistent leadership provided by the Haslam Administration.  Because of the groupthink of the governor’s inner circle, Governor Haslam now runs the risk of the heavy-handed arrests of citizens in their Legislative Plaza becoming the symbol for his brand of leadership.

Here’s the thing.  This latest textbook case of groupthink was exacerbated by a governor trying to ride the wave between the extreme right and more reasonable elements of his party, and a number of new appointed officials trying to show they’re tough.

Almost all of Professor Janis’s eight symptoms of groupthink are evident in the overreach of the Haslam Administration:

* Illusion of invulnerability – it results in cocksure attitude that results in unnecessary risks.

* Collective rationalization – it leads to dismissive attitudes toward warnings or questions about the group’s general assumptions.

* Belief in inherent morality – it leads everyone to swear an oath to their cause and ignore the ethical or moral consequences.

* Direct pressure on dissenting opinions – pressure is exerted in such a way that anyone on the team with a contrary opinion is treated as disloyal.

* Self-censorship – people are reluctant to express their doubts or and choke back reasonable questions.

* Illusion of unanimity – the majority view is assumed to be the opinion of every one in the group because of their silence.

* Self-appointed ‘mindguards’ – people in the group block information that is contradictory to groupthink or that presents facts that threaten the poor decision.

Trespassing on Their Own Land?

We predict that these same behaviors will now lead the Haslam-Gibbons Administration to refuse to even consider that they just might be wrong or allow them to deviate from the groupthinking that caused the problem in the first place and conjured up the thinking that they were omnipotent enough to declare a public space out of bounds for the public.

It’s a confusing concept to us.  The Haslam Administration decided to pass a policy that makes it a violation for anyone to be in public space in the area of the Capitol (not the lawn of the Capitol, by the way) from 10 p.m. until 6 a.m.

There’s only one problem.  This isn’t private land, so how can a member of the public be arrested for being on land they own?  How can this administration – bolstered by the grandiosity of its groupthinking – decide that it can rule on what is truly public space and what is not by administrative edict?

Meanwhile, Mr. Gibbons, who developed a weakness for grand-standing while serving as attorney general here, said it was unrealistic for the State of Tennessee to meet requests from protesters for a stronger law enforcement presence to help deter thefts and altercations involving homeless people who had attached themselves to the Occupy Nashville encampment.

“We don’t have the resources to go out and in effect babysit protesters 24-7 … at the level that would have been necessary to address their concerns,” Mr. Gibbons said during a press conference Friday.  He, however, did have the manpower – all 75 Tennessee Highway Patrol officers strong – to arrest 29 people and keep them in custody for several hours although they had not committed any crime.

Which brings us to Magistrate Nelson, who, for two consecutive nights, refused to hold for court any of the people arrested by the state.  He said that he could find “find no authority anywhere for anyone to authorize a curfew anywhere on Legislative Plaza.”

“It is of particular consternation that the rules and curfew were enacted after a protest movement and occupation of Legislative Plaza had been tolerated for just over three weeks, with no notice that the group members were involved in criminal activity,” Mr. Nelson wrote in an email to Davidson County General Sessions Court judges explaining his decision.

It’s an example that led us for the first time to envy Nashville.