Revisiting the Negotiations that Brought the Grizzlies to Memphis 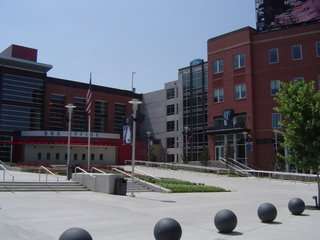 In June, 2006, we posted a commentary about the FedEx Forum as the controversy about its construction and financing continued even after the new arena opened.  It’s hard now, almost seven years later, as the city basks in the victories of the Memphis Grizzlies, to remember the depth of the controversy back then over almost anything connected with the project.  As WMC-TV reporting showed last night about what happened back then, it’s worth separating the facts from the mythology.  Just as there was a negative mythology back then about the recruitment of the Grizzlies and the financing of FedEx Forum, there is now now the temptation to rewrite the history of the project with a distinctly rose-colored mythology.

It’s worth noting that while the pursuit team of private sector leaders was out front, they were not responsible for negotiating the contract that guaranteed that the team would stay here for a long period of time and that Memphis (unlike Nashville) would not pick up the deficits of the arena as part of the deal to recruit a professional sports team.  While local government regularly takes a beating and many believe that it can’t do anything right, the contract with the Grizzlies was, in our humble opinion, one of its finest moments.

Here’s what we wrote in June, 2006 about the negotiations as they unfolded:

The current controversy about the FedEx Forum garage is quickly becoming about more than why plans were changed and how $6.3 million in federal funds were lost.

There are resurrected questions about the contract between Memphis and Shelby County Governments and the Grizzlies. There are renewed shots taken at owner Michael Heisley by fans made mad by some of the team’s mistakes in the care and feeding of its customers. There is the expected political distancing by elected officials who were there and voted for the contract for the new arena.

They heard that the Vancouver Grizzlies was looking to move. They contacted Michael Heisley, not the other way around, to ask if Memphis could be considered. Like it is in the world of professional sports franchises, there’s no warm, fuzzy feelings that lead a team to move to a new city. It’s nothing but clear-eyed financial benefit, frequently expressed in the public commitment to provide an NBA-quality arena that can be a revenue center to help make the absurd business model of the NBA work.

There is nothing unique about this, because Memphis’ experience is consistent with what happens in almost every city. (It’s worth noting that the team and the so-called local NBA pursuit team weren’t even demanding a new arena, because they were prepared to have The Pyramid upgraded to NBA standards. That’s when it was suggested by the county mayor, not Mr. Heisley, that for slightly more, a new arena could be built.)

No one in the halls of government panicked and got on the phone to put things back together. Lead local government negotiators – Memphis Chief Administrative Officer Rick Masson and me – had made a list of “deal breakers” that were nonnegotiable. Failure to agree on any of them would collapse the talks from the public side. So, when the Grizzlies walked out of the room, Memphis and Shelby County Governments concluded that it saved them a lot of time, because it didn’t look like the team would agree to the public conditions any way.

Through the mediation of a third party, the teams were reassembled to see if there was a way to restart the negotiations. Taking place in the offices of Storage USA with the shuttling of positions by Dean Jernigan, city and county negotiators were in one room and the Grizzlies representatives were in another.  Again, city and county negotiators listed their deal breakers, and over the next month, one by one, they were accepted, but not without the charges and countercharges that are part of any negotiation. Eventually, the big issues that had been deferred while the others were addressed were essentially all that was left: the Grizzlies paying the operating losses for the new arena and the team making a long-term commitment to stay in the arena and in Memphis.

Local government had been told by pro sports consultants and colleagues in other governments that no city of Memphis’ size would ever win these two key concessions, and frequently, it looked as if they would kill any chances for a contract.

It was in the context of the Grizzlies’ accepting operating losses – estimated at upwards of $5 million a year – that the non-compete clause was put on the table. No one with any business sense – much less an NBA team owner – would take on the obligation of paying the operating costs and not look to protect their downside in the form of competition from other buildings that could easily undercut rental rates for the newer, more expensive arena.

It was a lesson that city and county had learned painfully when The Pyramid opened without closing the Coliseum. That old arena – already paid for and with no official concessionaire or parking company – was adept at underbidding the newer building, accomplishing nothing so much as driving up the operating subsidy of The Pyramid year after year and putting more money in the pockets of promoters.

It was thought in 2001 and it’s still the case today that it’s in the long-term best interest of taxpayers for FedExForum to succeed, and in that vein, the non-compete clause was agreed to in return for the Grizzlies taking on the operating losses. In other words, the option was for taxpayers to pay more than $5 million a year for the operating deficit of the building, and it would probably have been higher. After all, sponsorships and advertising agreements are skills that government doesn’t possess and or ill-equipped to perform or oversee.

So, the minimum cost of eliminating the non-compete clause would have been more than $5 million for the Forum, about $2 million for the operating deficit at The Pyramid and the $1 million deficit at the Coliseum. In other words, local government could have taken on a total of $8 million in operating deficits and all just so promoters could make more money from their events.

That said, negotiators on all sides understood that the non-compete clause was not intended to block events from coming to Memphis, only to give the Forum first option to make them work there. That the Grizzlies took the position most advantageous to them in interpreting the contract should surprise no one, but over time, the application of the non-compete provisions are settling into the philosophy of the negotiations.

While it’s never out of bounds for people to question the public benefits of the arena project, or whether this is the best use of $250 million or whether research proves that professional sports underdeliver as an economic engine, the malignant notion that city and county governments simply agreed to whatever the Grizzlies demanded is just wrong.

As for the financing of the arena – which the Grizzlies had no part in developing (like the garage funding, they didn’t care where it came from, as long as they got the facilities built), in retrospect, it seems clear that the financing would have been better if it had not included PILOT payments from MLGW.

That said, lost in the fog of opinions is this fact: the preponderance of the financing on the arena come from user-related fees like the sales tax rebate from NBA events and the arena’s seat use fee and from sources like the Tourism Development Zone (a rebate by the State of Tennessee of the sales taxes collected in a district that essentially is all of downtown) that only could have been spent on an arena or convention center.

Let’s just try to remember that we won. We got the professional sports team that we had sought for more than 20 years, we got a long-term commitment from it to this city, we got it to pay the considerable operating losses of the new arena and we did it with no larger percentage of property taxes in the Forum project than city and county governments put into AutoZone Park.