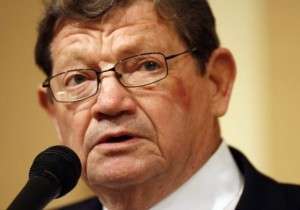 John Willingham died a few hours ago at the beginning of what was the equivalent of barbecue’s holy week in downtown Memphis.   It seemed like an appropriate to bid farewell to a man as unique and authentic as the city he passionately loved.

Adding to the irony, Corky’s founder Don Pelts also died yesterday.  It was the equivalent in the barbecue world of when Thomas Jefferson and John Adams died on the Fourth of July in 1826.

A familiar competitor at Memphis in May International Barbecue Context, Mr. Willingham was a former world grand  champion, and just last year, he was inducted into the National Barbecue Hall of Fame in Kansas City, Missouri, for his lifetime of contributions to the barbecue subculture.  It was a journey that began in earnest four decades ago when he reinvented the way barbecue was cooked with his revolutionary Turbo Cooker, ushering in the era of offset, or indirect, of barbecuing.

Meanwhile, he won other barbecue contests, opened two restaurants, authored a book of secret barbecue recipes spiced up by his legendary stories, and created an online business selling his marinades, rubs, and sauces.  He dearly loved barbecuing but more than the food, he loved the camaraderie of it, and he was a veritable encyclopedia of information about barbecue and barbecuers.

When he was inducted into the Barbecue Hall of Fame, a fellow inductee summed it up well: “John Willingham has forgotten more about barbecue than most of us knew to begin with.”

But, while I knew Mr. Willingham as a barbecue giant, I knew him even more as a friend.  I met him when he was a Shelby County Commissioner, where he was engendering the enmity of many Republicans because of his failure to adhere to party orthodoxy.  In particular, this stemmed from his proposal for a privilege tax for people employed in Shelby County, although University of Memphis economists had validated his calculations that it would eliminate the local option sales tax, the wheel tax, and dramatically reduce the local property tax.

For me, it was that level of ingenuity and inventiveness that defined him as much as barbecue ever did.  Because of the media narrative of him as a gadfly, few people knew that he held about 17 patents – from the barbecue cooker to construction breakthroughs to his latest venture – a barge-mounted electric power plant – an idea already given the stamp of approval by the head of the University of Memphis’ engineering school.

All in all, Mr. Willingham’s life was the stuff of fiction, embracing semi-pro baseball, his stint in a band, his work in the Middle East, his time as a Nixon appointee to HUD, his barbecue career, and his foray into politics.

I remember him today for an incredibly rich life, but I remember him most for his random acts of kindness.  In fact, that’s how I met him.  It was during  a difficult time in my life, and out of the blue, Mr. Willingham telephoned to ask how he could help.  I had never met him.  I had never spoken to him.  We became fast friends, and when I was once asked to describe him, I said he was the kind of person that you want to take into the foxhole with you, because you never had to wonder if he was still there.

There were several previous times in his life when his family was told to come to his hospital bedside to say good-bye, but each time, he managed to recover and return to yet another big idea and pet project.  During his trip to Kansas City for his induction into the hall of fame, he was injured and this time, recovery put his body to its ultimate test.  I visited him a few months ago, and for the first time, he looked frail, but as usual, he was vowing another comeback, and I had learned not to bet against him.

We spent the morning together, a morning in which I was reminded of his relentless campaign for the truth, his pride and love of his beloved daughters, and his feelings for the love of his life, his wife Marge.  Sitting there that morning, I thought how I envied his family, which had gathered that morning, because he was a man who loved life and who constantly sought a new hill to climb, but always kept his family at the center of all that he did.

Memphis will miss him as well.  He was a contrarian, a gadfly, a maverick, the asker of impertinent questions, and a person who refused to go along to get along.  We need more people like him.

A year ago, we wrote about Mr. Willingham’s latest project and we post it here as a reminder of this remarkable man:

It sounds for some people like the beginning of a story that ends in a punch line: John Willingham and Buckminster Fuller were on a panel at the Massachusetts Institute of Technology.

Yes, it was that Buckminster Fuller – Renaissance man, systems theorist, philosopher, futurist, and inventor of the geodesic dome.

They were on the panel in the early 1970s when Willingham was a Nixon appointee overseeing a new program for the U.S. Department of Housing and Urban Development.  Already, he had received a patent for the “T Mobile Pre-Cast Concrete Molding Machine and Sub-systems,” a new building construction process.

During the MIT panel discussion, Willingham was asked about it.  As he explained the new construction method, Fuller scribbled the calculations, and when Willingham was through, Fuller said: “Johnnie, you’re not an engineer, are you?  If you had been an engineer, you would have known that you couldn’t do that.”

It’s an apt description of Willingham’s work in and outside of the political system.  When you don’t know something’s not supposed to work, it’s surprising what you can come up with.  As a Republican Shelby County commissioner, he was willing to touch the third rail of Republican dogma when he pushed for a new tax – a payroll tax – to reduce the overall tax burden for Shelby Countians.

Although his intent was to reduce the overall tax burden on Shelby Countians, his refusal to tow the line on Republican anti-tax dogma, not to mention his inherent independence, put a target on his back and truncated his political career.  The 10-year privilege tax would have been paid by every worker in Shelby County, but its real targets were the about 85,000 people drive into this county and earn approximately $3 billion a year.

His tax plan would have eliminated the county wheel tax, lowered the county property tax by 50-80 percent, and eliminated the local option sales tax (reducing the rate to 7 percent). Most taxpayers in Shelby County would have paid less as a result of the overhaul of the tax structure.  And yet, the political pushback on the idea was so persistent that few people in power every heard that the assumptions and projections were validated by economists at the University of Memphis.

Willingham is largely a footnote in local political history these days, but the out-of-the-box thinking continues, and once again, it challenges the conventional wisdom, not to mention science.

This time, he’s invented the Barge-mounted Portable Power Plant, and despite engineering formulas that said it wouldn’t work, it is now undergoing tests and in the process, it is rewriting the possible.  University of Memphis Department of Mechanical Engineer Chair John Hochstein, writing in his capacity as an individual researcher, said he plans to publish new research generated by the project.

“The research continues in the expectation that even higher levels of performance can be obtained from better understanding of the deceptively complicated physical interactions occurring within this seemingly simple machine,” he wrote.

His prediction is that each of the barges, with 48-foot diameter paddlewheels that harness the power of flowing water, will produce “more than 2.5 megawatts of power when moored in a flow with a velocity of 7.2 miles per hour, the measured water speed past the Memphis riverbluff in early spring, 2011.”  The estimated cost of a barge is $2.6 million.

“The river is free so there is no cost of fuel,” Willingham said.  “The carbon footprint is zero, and there is zero pollution.  It uses hydrokinetic, wind, and solar energies.”

While he thinks barge-mounted power plant production could be an emerging green industry for Memphis, what most propels his passion for the project is its potential impact in the Third World.  “Villages in Africa where children are living in really difficult situations could get electricity and it could change their whole lives,” he said.  “Also, it gives us a way to respond to natural disasters when electricity networks are down.”

So far, Willingham has received a lot of positive reactions about the project and now he’s looking for the political or business clout to move the tests from a scale model barge to a full-size barge and onto the local economic development agenda.

It’s hard to read the test results and the concepts without thinking of Fuller: It is amazing what you can do when you don’t know you’re not supposed to be able to do it.