The Campaign for More Secrecy in Government 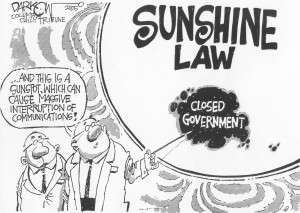 The Shelby County Board of Commissioners ramps up for another vote to bring more secrecy to public decision-making and our mayors are working again to close some public records.

It all too much to understand, particularly considering that public confidence in government is at record lows and a large part of the problem is caused by the feeling that elected officials are cutting deals out of the view of the public and serving their own political self interests.

We remain stunned that the board of commissioner’s bastion of liberal thinking, Steve Mulroy, continues to lead the fight to move public discussion from the sunshine to the back room.  More to the point, none of the advocates for eroding the public’s right to know has offered any examples of problems caused by Sunshine Law.  It always acts as if they aren’t already working around the law: Sometimes, now in the midst of debate about testy agenda items, the commissioners recess so they can allegedly gather in the backroom of the Commission Chambers to get some refreshments.  The real purpose: to talk and reach agreement on the issue being debate on the agenda.

The call for changes in the Sunshine Law conjure up images of the early days of Shelby County Government. In those pioneer years in this wilderness community, the county legislative body was the law of the land – administration, judicial and legislative. As a result, when a member was arrested for public drunkenness, enough members left the room to make sure there was never a quorum to convict him.  Meetings were also moved from various locations, including residences, so it was difficult to find the meeting in the first place.

Somehow, there are days when the notion of drunk members of public bodies would at least make some of their decisions make sense.

Changes in the Sunshine Law would ensure that meetings in an Internet age would become throwbacks to the back-slapping days of local politics, when the meetings of the three-headed administrative branch of county government – the structure of county government before the mayor’s job was created by public referendum in 1974 – actually lasted less than three minutes.

It happened because the three officials met privately before their public meeting and cut their deals. When the public meeting convened, one commissioner would make a motion to approve everything on the entire agenda.  It would be seconded, passed, and the meeting adjourned beforemost people had even sat down.

In the face of the calls to weaken public meeting laws, it’s worth remembering that our state’s laws aren’t particularly onerous or strict. While there are some areas that need clarity (so there aren’t 95 county attorneys giving 95 different interpretations of the law), the last ranking that we saw by the Investigative Reporters and Editors ranked Tennessee 45th in the effectiveness of its Sunshine Law.

After all, the remedy to “cure” a violation is pretty simple – deliberating and debating the same issue in public session. And what are the draconian consequences for a public body if a newspaper or activist actually wins a lawsuit? The action by the public body is voided, which means that it has to have a “do over” in a public meeting.

The head of the Tennessee County Commissioners Association, David Connor, pleaded for the weakening of the Sunshine Law a few years ago by saying: “It’s more to the fact that there are some circumstances that the public and taxpayers’ interests are better served by meeting in closed session.”

If he’s so sure of this, would he like to let us taxpayers vote on this? After all, it’s not like these elected officials aren’t conducting personal business or paying the costs of their decisions. We are.

It’s called a public meeting not just because it’s an open meeting, but because it’s the public paying the freight – for the bills being passed and for the salaries of the people involved.

Moving to the Back Room

After all, not only will the changes in the so-called Sunshine Law allow secret meetings attended by almost all members of a public body, but it will in turn eliminate much of the public discussion that now takes place and gives taxpayers more insight into legislation. In weakening the law, back room deals can be cut in secret so that at the meetings of the public bodies, for example, votes can be taken without any real debate or discussion, denying taxpayers key information into the decisions.

Put simply, changes in the Sunshine Law are all about serving the interests of politicians rather than the public.

Meanwhile, Shelby County Mayor Mark Luttrell and Memphis Mayor A C Wharton are pushing again this year on their own amendment to state law to close records that are now public.

Anytime there is a choice in Memphis and Shelby County governments between secrecy and transparency, it should be a no-brainer.

We have previously cautioned our local governments against buying into the propaganda from the special interests that can never get enough in incentives and special privileges from government.  Just a few weeks ago, it was suggested that the law involving the transfer of property to the Industrial Development for as long as a tax freeze is in effect has a “chilling effect” on business recruitment.  This actually led city and county to recommend an amendment to the state constitution.  Now, it’s imperative that we close some public records that purportedly contain proprietary information about companies.

We all agree that we have to remain competitive, but Memphis’s lack of worthiness and desperation for new jobs combine to create a risk to a healthy balance in our business recruitment.  Again, it seems like we’re majoring in minors while there are really relevant issues that deserve attention to get our economy moving in the right direction again.  And yet, economic development types would have us think that all of our problems stem from these pesky IDB rules to protect taxpayers’ interests.

Being a business-friendly government doesn’t mean that we have to do everything business wants.  That’s why the public records law should not be weakened.

The Life in America’s Dying Cities

The Wisdom of Toni Morrison