There’s really no reason that a city’s utility company should not be a champion for smart urban design.  Unfortunately, according to emails from you for this ongoing feature, that’s too often not the case in Memphis.

Since launching this feature on urban design problems in Memphis, we’ve received several emails about MLGW’s insensitivity to neighborhoods, major streets, and public spaces.  One came from Roy Barnes, author of the indispensable Gates of Memphis blog, whose email inspired the new name for this ongoing feature.  He referred to the problem as “urban indifference” and that’s the precise diagnosis of many problems here.

Back to MLGW, there are numerous photographs we can offer – and we surely will in coming weeks – but for today we point to two examples.

On Union Avenue between Fourth Street and Danny Thomas Boulevard, MLGW is working on yet another neverending project.  For two months, a lane of traffic was blocked by a backhoe left on Union Avenue.  Finally, the heavy machinery was taken away but the lane of traffic remains blocked off with cones while MGLW slowly moves toward completion of the project. 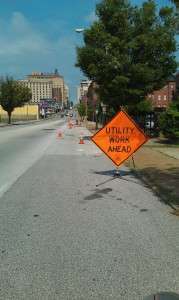 West of the blocked lane is another familiar sign of MLGW maintenance.  After digging up the city street, there is no attempt to match the existing street to the new asphalt if the patch job.

This also happens on sidewalks all over Memphis.  One notable example is at Tiger Lane, where in less than a year since the $15 million green space was opened to great fanfare, MLGW did some work that required it to remove a section of sidewalk.  The new section of the sidewalk does not match the Tiger Lane sidewalk (although we’re told by park officials that MLGW had the formula for a precise match). 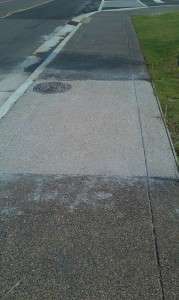 We’re left with the nagging feeling that if MLGW treats public space and major city streets so cavalierly, we can only imagine how neighborhoods get treated.  Sadly, by many neighborhood leaders, MLGW is considered an enemy of street trees and good neighborhood design and there’s really no reason for it.  Our public utility should be a leader in good urban design whose work inspires new appreciation – not to mention higher expectations – for making our neighborhood and our city more attractive.

There’s an update on the Madison Avenue barricade that can be found on http://joespakeblog.com/2011/08/11/in-a-real-city-revisited/.  There’s little progress to report and there are suggestions that city government is in a holding pattern while the warring building owners decide who’s responsible for the building collapse in the first place.  We hope not.

While we’re on the subject of cavalier maintenance policies, we got an email about the artist’s palette that is Liberty Bowl Memorial Stadium.  As a reader said, surely there “must be a logical reason why repairs and concrete colors don’t ever seem to match the original concrete at the stadium but I am are hard-pressed to understand what it is.”

We’d never noticed but here’s what it looks like: 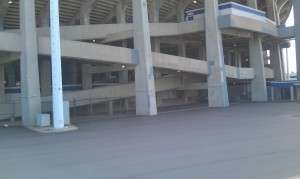 These are this week’s examples of urban indifference. Thanks to those of you who emailed your poster child for urban indifference and to those who provided a commentary and photograph as well.  If you don’t have time to snap a photograph, we will gladly handle that part for you if you’ll provide your nomination for the best demonstrations of our lack of appreciation for urban design.

Again, we invite you to send your urban offenders to us here at tjones@smartcityconsulting.com.

The Bartlett Christmas Drama Fits Into A National Context