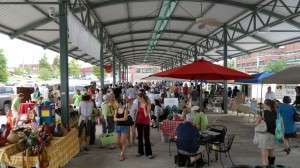 Perhaps a more appropriate title for a follow-up volume for this decade is When Good People Happen to Do Bad Things.

It seems to be a developing theme for this new century, and we thought of this again when we were trying to wrap our brains around the recent controversy at the Downtown Memphis Farmers’ Market, where some customers were put off by the presence of some African-American seniors using vouchers to buy their fresh vegetables.

The ill-thought-out and stereotyping comments were featured on the Farmers’ Market Facebook page before being taken down.  Let it be said that it was incomprehensible that reasonable people could actually allow themselves to post these kinds of dismissive, patronizing, and even hateful comments.  It was all made even more remarkable since one of the primary roles that farmers’ markets play in cities like ours is to act as common ground where our community can be seen in all its vibrant diversity.

Apparently, that’s not a position shared by some shoppers – we hope only a few – at the market who are put off by that diversity becoming part of the downtown market experience.  It’s a phenomenon surfacing in places like Atlanta and Washington, D.C., with the reverse white flight that’s taking place back in urban centers.

New census data show that Washington, which has been majority African-American for 50 years, is undergoing pains as a result of the city losing its black majority.  Meanwhile, for the first time since the 1970s, a majority of Manhattan is Caucasian, and Atlanta is experiencing historic numbers of whites moving back inside the city limits.

In other words, many U.S. cities are on the verge of unprecedented demographic change, and there will be the inevitable conflict about what the urban experience is.  All of this is much less pronounced here of course, because we are many years away from the kinds of influx occurring in some cities.

However, recent years have seen the migration into downtown Memphis, particularly by many people from the suburbs and by children of the suburbs who brought a suburban expectation that denies the authenticity and distinctiveness that make downtown such an interesting and intriguing place in the first place.

Downtown is not the Suburbs

Photographs in the newspaper and on the Memphis Farmers Market website suggest an urban experience that is largely white.  We know this isn’t the purpose of its founders or its current board.  It was just where the original market was.  The Market organizers and workers are well-meaning people who care about their city and created this special downtown place as a gift to their city.  They are finding their way through their first controversy and we expect that they will solve it with equanimity and fairness.

We are equally certain that they did not mean to effectively segregate the vendors accepting the SNAP vouchers and to make a statement about them by the placement of the vendors selling to them.  It’s a lesson in the power of symbolism to send a message contrary to your intentions, and we hope for a solution that feels less like ostracization of the shoppers using vouchers.

We’ve given up in our battle against suburban residential architecture downtown, but it is a constant reminder of changes to downtown’s urban setting as a result of suburban tastes.  That said, we know many share our opinion, including those involved in the farmers’ market, that the beauty of the downtown experience is found in the chance encounters with people of all races, incomes, and opinions and the variety and diversity of our people.

Ultimately, the future success of downtown Memphis will not be found in its suburbanization, and while we lost the battle on architecture, we cannot lose the battle on important experiences like the farmers market to act as the common ground for downtown’s diversity and differences.

Part of that difference is the large number of people who are unemployed and the large number of low-income people who need nutritious food.  That some people would suggest that they shop in “their own” farmers market needs no refuting, because there are jackasses everywhere.  The trick is to make sure that they do not sour the quality of the experience found at the Memphis Farmers Market.  If there is any virtue that is embodied in the downtown experience, surely it is tolerance.

Downtown Memphis needs the income demographic represented by new residents who contribute to more city government revenues, and we should take notice of the lessons of the suburbs – the power of cleanliness, amenities, and safety – but it’s too early to know how the urban centers will change as a result of demographic shifts.  Here, we hope we will move ahead carefully so we don’t undermine what makes us love downtown in the first place.

This weekend’s flare-up had an edge to it that suggested that some people believe they “own” the neighborhood and the Farmers’ Market and others, notably African-American seniors, are outsiders.  Again, we refuse to believe that it’s a majority opinion because it flies in the face of the Farmers’ Market purpose in the first place.

It’s been written that farmers markets can become the heart and soul of a community, and that’s the ultimate outcome here: to make every Memphian feel equally welcome to attend.  That particularly goes for the people who most need nutritious, fresh food.  After all, it’s customary for grants submitted by farmers markets to include the need for better food for inner city residents.

That takes us back to the trigger for the tasteless comments on Facebook resulted in a reduction of growers in Shelby County participating in the Senior Farmers Market Nutrition Program, a U.S. Department of Agriculture program that allows low-income senior citizens to buy locally grown produce with vouchers.   With the reduction, four of the participating 10 growers are at the downtown farmers market.

We understand that some growers don’t participate in the program because of the cost of the Electronic Benefit Transfer (EBT) Systems.  As part of the USDA Farmers’ Market Promotion Program, it has been issuing grant funds for new EBT projects, and hopefully, more growers will embrace the technology to serve all its customers.  That would solve many of the logistical problems that result from only a few growers being authorized to sell to this specific market.

The redemption of vouchers with EBTs doubled in four years and is steadily growing, so it’s an idea whose time is coming quickly.  All authorized growers are encouraged to have EBT systems, but that isn’t going to happen soon.  We can only hope that recent cuts in federal funding don’t reduce the USDA program to support EBT equipment for more growers.  Meanwhile, in many places, state government, local governments, and some nonprofit organizations have stepped in to fund wireless EBT service.

“We see cracks in the health of our environment, economic, and social systems, and declining natural resources, concerns about the future of long-term energy, and rising obesity rates, creating and sustaining local food economies with farmers markets as an important component, may be both an admirable goal and a necessity,” according to the director of the University of California Sustainable Research and Education Program, adding that in particular low-income and elderly residents receive benefits to their nutrition and their budgets from farmers markets.

Slow Food USA cautions against farmers markets becoming a luxury for the select few, and calls for the removal of any barriers that stand between low-income people and access to farm fresh food.  In several cities, health departments are giving money to supplement the vouchers and encourage healthy eating, other cities are funding EBT terminals for farmers markets, and some cities are giving incentives to encourage people using vouchers to stop at other downtown retailers.

We admire the mission of the Memphis Farmers Market and it’s time for all of its shoppers to get acquainted with it: The mission is to improve public health nutrition options by providing a vehicle to educate the community on nutrition and good health; provide access to local food choices; assist area farmers, producers, and artisans with sustainable business opportunities; generate a sense of local pride while furthering the economic development of our community; and serve as a community-gathering place.

For all of those reasons, a few bad apples can’t be allowed to spoil the experience that the rest of us share and enjoy, precisely because it offers fresh food and a fresh perspective of our own city.