A note from Bill Day:

On Saturday, June 25, 2011, I did the original ‘I love NY Gay Marriage’ art in celebration of this historic event. After sending it out to syndication, it became a huge success all over Memphis. Smart City Memphis did a story and showed the art. It has been circulating on Facebook all over the country, but nowhere as big as here in Memphis.

I am printing 200 signed and numbered Limited Edition copies of the ‘I Love NY Gay Marriage’ art. It will be printed on 12″x16″ white, high quality, 70 lb. paper suitable for framing. The price will be $50.00 plus mailing cost of $3.50. Shirts with the art are also being arranged. 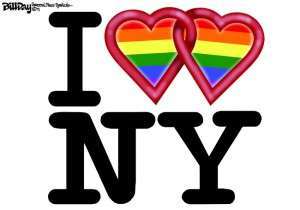 Getting On With Our Future

Our Urban IQ: Kicking Off Our Photo Project