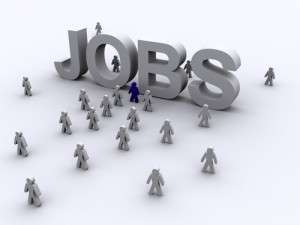 This was made clear during the boom years of the Clinton Administrations as cities, especially downtowns, were remade by record investments.  Not only did Memphis not experience a burst of new investments that improved our quality of place or quality of life, but we limped into the 21st century shedding jobs in troubling five-digit numbers, losing young professionals in record amounts, and recording incomes on the decline.

Then, the worldwide recession hit.

We lost 10,000 more jobs pretty quickly, driving our total loss since 2001 to about 35,000.  In keeping with our commodities approach to economic development, future progress will not come in bursts ahead but in step over step.  Although Memphis is definitely moving in the right direction, we should prepare ourselves for the long haul to get where we need to be.

Every report that matters tells us that we will have to redouble our efforts, we will have to take more risks, and we have to think and act differently if we are to bounce back.  If we want to become competitive, it will take more than talking the talk about innovation, entrepreneurship, minority business, and authenticity.  We have got to walk the walk, and fortunately, we’ve taken a few steps in that direction lately.

We should begin with the understanding that there is no magic answer, no silver bullet, to leap us over our competitor cities.  There will no single project or program.  Instead, it will be activity on all fronts that converge to create new momentum, new industry sectors, and new export opportunities.

We succeed when we face the hard truths in front of us, because it does no good to close our eyes to the issues that hold Memphis back.

And here’s the real deal: Coming back isn’t just about new jobs and new investments.  It has to also be about population growth.  Unfortunately, only a few people have raised this issue over the past 25 years while Memphis’ annexation policies lulled everyone to sleep, all while the population inside the 1970 city limits fell 30%.

John Gnuschke, director of the Sparks Bureau of Business and Economic Research at the University of Memphis and our smartest thinker on the economy, said in a recent Urban Land Institute presentation that in a phrase, Memphis is “stuck in the gumbo.”  He pointed out that there are cyclical, or short-term, and structural, or long-term, issues that will have an impact on Memphis’s future.

He said cyclical issues resolve themselves while structural issues do not.  His advice: Memphis should focus on two issues – unemployment and population. 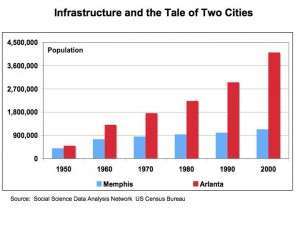 While the MSA is again adding jobs, we continue to have the lowest population growth of Tennessee’s metro areas.  And, as we have for several decades, our population growth is essentially births over deaths.  The net migration during the last decade for Memphis showed an increase of 27,332 African-Americans and a decrease of 66,112 Caucasians.   As a metro, 43,678 Caucasians moved away, perhaps heeding former Memphis Mayor Willie W. Herenton’s suggestion about loving it or leaving it.

This statistic matters to Memphis as long as we are unable to break the link between race and poverty that exists here.  It matters unless we can come face-to-face with the obvious: we have to become a national hub of African-American talent and African-American entrepreneurs.  There is no other opportunity for the future that builds as much on our innate distinctiveness or has the potential for putting more money into everyone’s cash registers.

Memphis as a Cause

In this regard, it’s troubling that Memphis has a negative image among African-Americans living outside Memphis.  The entire Southeast is trying to compete in a reality in which Atlanta sucks up all the young professional talent, but somehow, some way, Memphis needs to find competitive advantage on this African-American potential as much as Atlanta has.

To this point, we should trumpet all the good things happening in Memphis now, but we should also invite young professionals – who have proven that they want to make difference by their immigration into New Orleans – to join us in disproving the myth that a majority African-American city (in our case, region) cannot succeed.

As for another key demographic, Shelby County had about 41,000 fewer 25-34 year olds in 2010 than in 2000.  Most concerning of all is that these negative trends seem to be picking up momentum.  For example, the percentage of 25-34 year-olds leaving Shelby County doubled in the last decade when compared to the 1990s.

It’s past time to get really serious about attracting, developing, and retaining this young talent in Memphis.  A recent study concluded that Memphis has the 22nd cheapest place to live in the U.S., reminding us of a comment by a research fellow at St. Jude Children’s Research Hospital in a focus group a couple of years ago: “Memphis gave me the chance to quit living like a student.  Here, I could buy a house instead of sharing an apartment with a couple of other guys.”

Maybe that’s a good hook for Memphis in marketing to this choice demographic: They can quit living like students here.  Of course, that pitch must also be accompanied with information about opportunity since it’s no secret to anyone with a computer that unemployment rests at 10%.   Perhaps, we could coax some of these people to be part of the exciting bioag developments, the growing green cluster, and other innovative things under way.

Whatever we do, we begin by committing to complete honesty by facing what we’re up against and by increasing our resolve to confront the facts.  In a review of the nation’s 100 largest metro areas, Brookings Institution listed the Memphis MSA as one of the 20 weakest-performing metro areas when it comes to recovery from the recession.   In the recessions of 1981, 1990, and 2001, by this time, our economy had lifted off again, but this time around, it still seems to be finding bottom.

The Federal Bank of St. Louis, measuring several key indicators, said our regional economy is trailing the rest of the nation.  Meanwhile, Forbes magazine – the periodical with which we have become obsessed – ranked Memphis 147th for business and careers in a list of 200 metros.  Nashville was #6, Knoxville #26, and Clarksville #87.  We led Kingsport at #149 and Chattanooga at #151.

We have previously admitted our wonky tendencies, but we believe there is much potential for the recently announced Obama White House Strong Cities program that selected Memphis as one of its six target cities and the Bloomberg Philanthropies grant of $4.8 million over three years to create a culture of innovation in city government.

It’s hard to explain the importance of these to average Memphians, who rightly are focused on finding jobs, making money, and surviving the aftermath of the recession.  That said, it’s just these kinds of initiatives that have real potential to address the structural problems that face us and to bring the smartest innovators in the country and the brightest minds in the federal government to help us do it.

If the future is going to be a journey of many twists and turns for Memphis, it’s good to get started in the right direction.  These two programs seem to help get us on the right path; however, as we said, success will require progress on multiple fronts and unprecedented coordination and cooperation in our community.  In the end, that’s the most encouraging thing of all: there is indeed a new cadre of people motivated by what can be and are joining up to change what is.

A Timely Moment to Consider Inequality and Child Outcomes