Getting Past the Memphis Mythology to Get to the Truth 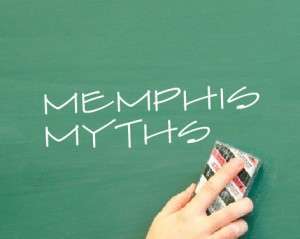 This was previously published as Memphis magazine’s City Journal column:

Memphis is a mythic city. We lay claim to mythic musicians and entrepreneurs who created our greatest exports to the world — from B.B. to Elvis to Chilton and from Kemmons Wilson to Pitt Hyde to Fred Smith.

But it’s the myths of a negative nature that drag us down. They limit Memphis’ options for progress, trap us in the same old conversations, and create conventional wisdom treated as facts.

That’s the most intriguing challenge for a new Memphis mayor: to think anew about old problems and to begin by blowing up old myths.

There’s the myth that we talk too much about race. Actually, we don’t; it’s just that we talk about the wrong things. The verbal blasts out of the Herenton City Hall were a lot about race, but not the consequences of Memphis’ economic segregation, the worst among the top 50 metros, or about breaking the inextricable link between race and poverty.

There’s the myth that new suburban highways create new economic growth. More to the point, they fueled the greatest relocation in history of people outside of Memphis, cannibalizing existing businesses, driving up county government’s debt to bankruptcy level, and forcing Memphians to pay the lion’s share of infrastructure they didn’t need.

There’s the myth our African-American majority is an economic drag. Because distinctiveness is the basis for competitive advantage, Memphis needs to be a hub of black talent. If that isn’t at the top of our economic development agenda, we’re not really in the economic development business.

There’s the myth that the 103,000 students in Memphis City Schools are problems. Instead, our anomalous bulge in students is a strategic opportunity. As the U.S. workforce contracts and cities fight for fewer workers, we already have ours. But we’ve got to train them for jobs of the new economy.

There’s the myth that all Memphis neighborhoods are in chaos and in deep despair. And yet, for every neighborhood in crisis, there is a place like Prospect Park — proud, well-kept, and attractive. While we deal with the communities swamped by problems, we need also to shore up the islands of great neighborhoods.

There’s the myth that success in economic development is measured by the number of tax freezes we hand out. Rather, they reflect the need to create a more competitive city, because prosperous cities aren’t selling themselves on cheapness, but quality.

There’s the myth that downtown is booming. Despite the frequent use of the word renaissance to describe downtown, we tend to define success by comparing Memphis to itself rather than to other cities. Our downtown still misses the vibrancy and activity so evident in other downtowns that have been reborn in the past 20 years. That’s why ideas like Memphis Art Park and the skate park on Mud Island are so important.

There’s the myth that annexation is always good. Memphis is now larger in area than New York City and eventually, it will be bigger than Los Angeles. Already, annexations have driven up the costs of public services and contributed to a deterioration of services in the pre-annexation area. The city government analysis needs to measure the impact of more land on the existing city and not assume that the neighborhoods and tax revenues will not decline.

There’s the myth that consolidating city and county governments is bad for the county’s smaller cities. A large government lies in the future for them — either a new one or a Memphis government that expands by almost 50 percent and surrounds them without them having a voice in it. It all makes the town mayor’s mantra all the more ironic: “We hate Memphis City Hall and don’t trust Memphis politicians. Memphis is full of problems. So we want to leave everything just like it is.”

There’s the myth that Memphis and Shelby County governments are wasteful while the smaller towns are efficient and economical. Actually, both city and county governments spend less on services per citizen than Collierville, Bartlett, and Germantown — from 32 to 48 percent.

There’s the myth that all we need to do is to tell our story better. More importantly, we need to create a city that gives us a different story to tell.

That’s why the most dangerous myth of all is the hoariest of all: there’s nothing we can do to change things. Meanwhile, China turned its whole economy around. That’s why it’s time for a mayor — and for the rest of us — to take a “no excuses” approach to our own city’s future.