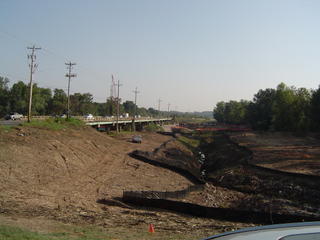 You can forgive environmentalists for flashbacks to the Overton Park expressway controversy in the 1970’s as they watch the relentless push to to construct the massive Walnut Grove Road/Humphreys Boulevard redesign although a final decision hasn’t even been reached on the alignment and design of Kirby-Whitten Road through Shelby Farms Park.

The city’s single-minded attitude rightfully inspires memories of the federal lawsuit to stop the interstate through its signature Midtown park in the early 1970s. As the trial was under way and testimony was being given by witnesses, bulldozers and construction crews were building the interstate closer and closer to Overton Park.

Incredibly, despite the federal lawsuit, the Tennessee Department of Transportation never stopped construction of the highway aimed straight at the park. Remarkably, TDOT’s attorneys even had the audacity to argue that so much money had already been spent on the road, it just had to go through the park.

U.S. District Judge Bailey Brown wisely decided otherwise, commenting on the brazen attempt to paint the court into a corner. As a result of his ruling, the portion of the interstate headed for the park was never finished and ultimately became Sam Cooper Boulevard instead.

Supporters of Shelby Farms Park have watched a similar sensitivity on the Walnut Grove project. While a special context sensitive design committee is weighing alternatives for the highway through the park and will make recommendations soon, Tennessee Department of Transportation and the Memphis City Engineer’s office couldn’t even wait for that road decision to be made.

Rather than allow the committee to make its decisions without the smell of asphalt in their nostrils, the engineers embarked on a project that will enlarge the Wolf River bridge entering Shelby Farms Park on its western edge from its present wide of 50 feet to a massive 250 feet. Construction at the bridge site (see photograph) already hints at the size of this project. When completed, the bridge will be about 1,000 feet long, and actually there will be three bridges. The one in the middle will have six lanes and the two on the outside of it will have two lanes each.

The immensity of the project raises quite reasonable suspicions by some that the engineers intend to build a huge concrete funnel pointed at the park, so they can then argue that the Kirby-Whitten highway must be larger to keep traffic from backing up. Essentially, it would be a reprise of the Overton Park argument, just with a 30-year fresh face put on it.

There’s one other similarity to the landmark parkland case. Back then, testimony revealed that transportation engineers actually aligned their highways to go through parks. They saw parkland as free land which helped to keep project costs down.

Looking at the Long Range Transportation Plan of the Metropolitan Planning Organization, it is easy to conclude that the same attitude exists today. While the Kirby-Whitten highway has received a barrage of media attention for the past 10 years, there are actually a cluster of highway lanes aimed directly at Shelby Farms Park.

Despite the community uproar about highway plans for Shelby Farms Park, current road plans actually aim 24 to 27 more new lanes of traffic (not even counting the six new lanes of the Walnut Grove bridge) at the 4,500 acres of green space in the heart of Shelby County. All together, they will eat up hundreds of acres of Shelby Farms Park, but no matter, it’s free land.

The new highway lanes aimed at the park:

All of these road expansion plans are puzzling in light of the report by the U.S. Public Interest Research Group that Memphis is 6th in the U.S. in the number of lanes of highways per capita, contributing to our city’s ranking as the 17th worst city for air pollution from vehicles. Meanwhile, Memphis and Shelby County were cited by the Federal Highway Administration for lack of safe alternative forms of transportation such as bike and pedestrian lanes and light rail.

Speaking of bike lanes, the current Walnut Grove bridge plans do not now call for them. Despite being the western entry point to one of the nation’s largest urban parks and serving as access point to several park trails, the city engineer’s office did not include bicycle lanes as part of his plans. Somehow, cars were worthy of getting 200 feet of new pavement, but bike riders couldn’t even get four. It says volumes about the sensitivity to community needs generally and Shelby Farms users’ needs specifically.

It has been reported that the city engineer’s office will now look at the potential of adding bike lanes, but the office warns that it may be too late to change anything at this point.

Density And Sustainability Are Linked For A Bright Future

The 10 Regions of Tennessee, Part 2: Tax-Sharing

Turning Our Attention To Finding A Great Mayor: Comments And Conversation