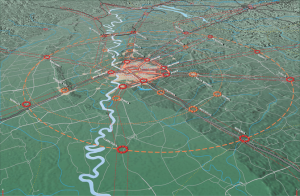 More and more, regionalism is a distraction from the things that really matter for cities.  That’s certainly the case in Memphis, and it’s why we’re swearing off any regional plans and programs until it’s proven clearly that there’s something in them for Memphis.

It’s evident that too many whites in our region feel no moral imperative – or enlightened self-interest – to help non-whites in need in Memphis.  It’s discouraging that often the more someone talks about being a “real” Christian, the more likely he seems willing abandon the poor and needy.

Often, it seems that as a person moves farther out into the region, the more he thinks he has no responsibility for the community at large.  In a recent meeting of the Metro Charter Commission, for example, Collierville Mayor Stan Joyner was trying to make the case that no one in his town uses the health department so they shouldn’t have to pay for it.

It was of course specious to most of us, but in a meeting with his political base, there would unquestionably be a lot of nodding heads.  Meanwhile, Germantown Mayor Sharon Goldsworthy sees a metro government as a vending machine from which her town could pay only for what it wants.

It’s All About Me Politics

Their rhetoric is always based on their political self-interest and a warped understanding of government itself.  After all, if we take their positions to their logical conclusion, we wonder why we’re paying for county schools since we don’t have children in them.  We wonder why citizens of Germantown who don’t care about concerts are paying for town’s concert hall. Why can’t we as taxpayers be just as myopic and selfish as these elected officials?  Let us only pay for the public services we choose to use.

Their comments are telling reminders about how often the people in the region simply see Memphis’ problems as Memphis’ problems despite the obvious impact on their cities.  It’s a version of the “it’s all about me” attitude that seems to grip so much of the political landscape these days, whether in the halls of U.S. Congress or City Halls in our region.

Here’s the thing about regionalism: It’s hard for us to think of one plan or program cast as regional in nature that ended up helping Memphis.  The poster child is of course transportation, which time after time promoted highways that fed the sprawl choking the urban core.  Even today, most people are willing to pretend that I-269 is a vital regional economic artery rather than the sprawl-inducing, developer-driven boondoggle that it is, and only Shelby County Commissioner Mike Ritz is willing to raise the seminal issue that we have one of the most unfair MPO’s in the country.  It is dominated by small-town mayors and by white members in a region dominated by Memphis and Shelby County Governments and in a majority African-American region.

It’s no wonder that for decades, public transit has been an afterthought – if thought of at all – in transportation plans.  With a clientele with little influence and with no lobbyists campaigning for them, riders of MATA have soldiered on with a mediocre transit product that is nothing short of an embarrassment for Memphis.  Recently, Congressman Steve Cohen even said that MATA is doing a good job in light of its budget, but as usual, it begs the question of why alleged regional transportation plans – required by the federal government – are content with a third world public transit system for Memphis.

Then there is regional economic development planning, which treats low-wage, low-skill jobs as our destiny.  There have been regional anti-poverty programs, but they have appeared to be designed more to keep the massive welfare machinery and jobs intact than to move poor people out of poverty.

Meanwhile, the region remains oblivious to what ails Memphis, where poverty has risen 27% since 2000 and the poverty rate for adolescents has climbed to almost 45%.   More to the point, the region’s politicians treat troubling trends for Memphis – loss of three middle-class families a day, loss of five people with college degrees a day, population loss of 28% inside 1970 city limits of Memphis and density cut in half – as a boon for their own cities.

That’s why it’s always possible to crowd a room with regional leaders to talk about roads, but it’s just as impossible to get them back to talk about attacking the highest economic segregation rate in the U.S.   That’s not unique to the Memphis region, however, because across the country, business-led efforts rarely place a priority on poor people nor are many people working on the issue represented in these partnerships.

It was about 20 years ago that regionalism was introduced here, and in retrospect, it’s obvious that much more good will and commitment to the concept flowed out of Memphis to the region than the reverse.  More to the point, North Mississippi in fact amplified the problems of Memphis as the foundation of an economic development program aimed at raiding our companies.

Yes, we know full well that regions are the economic units of competition in the global economy.  But we now also know now that regions may work for financial capital, but they don’t work for the social capital that is needed to fight the problems facing Memphis.  Aided and abetted by the federal government, the obsession with more and more infrastructure overwhelms programs to fight poverty, improve job training, reform schools, and more.

That’s why it’s time for New Regionalism – one that is urban-centered.  It’s way past time for us to ease up in Memphis of rhetoric of regionalism and act with single-minded concentration on transformative strategies that can create the city of choice that Memphis Mayor A C Wharton is pursuing – one where talent is developed, attracted and retained; where poor people have pathways out of poverty; and where students are treated as solutions, not problems.

Sadly, too few people in the region understand that solutions to these problems strengthen their futures as well as Memphis’.  Cities are like people – other people base their value on what value you tell them you have.  Now, we are telling our region – and our own people – that they are not valued by the city itself, because it’s the region that really matters.

It’s a message too often implicit, if not explicit, in regionalism programs around the nation.

Our region didn’t just happen to turn out the way that it did.  It’s exactly the region that our policies set out to create as they supported sprawl and subsidized lifestyle choices as people moved farther and farther out.  Of course, reality is setting in, because it’s middle class families that pay for the debt run up for sprawl, for more expensive commutes and with flagging housing prices.

We should begin the era of New Regionalism by rejecting the loud talk about regionalism that will inevitably come as the economy recovers from its meltdown.  The Greek chorus of regionalists will unquestionably call again for all of us to sign on to the leading policy concept of the past 20 years, a policy that unfortunately has done nothing to improve the lot of cities.

We need to reject as assertively as possible the “all boats will rise” gospel that says the problems of poverty and joblessness in cities will be reduced with more regional economic growth.  It hasn’t worked that way here, and there’s little to suggest that it will change.  Michael Porter’s research concluded that economic expansion in the region only accounts for about one-third of the urban city’s growth.

These days, all of a sudden, people are wringing their hands because the Brookings Institution reports that suburban poverty is growing.  It drew headlines across the U.S. in cities like ours where no one has shown much concern when urban poverty deepened despite the big promises of regionalism.

That’s why we are so glad that Mayor Wharton’s City of Choice plan is unabashedly Memphis-focused and that he’s using his bully pulpit to convene and convince partners to join a campaign to fight for the city.

Mayor Wharton is right when he says that Memphis has no margin for error.  It’s high time to put the emphasis where it belongs – the heart of the region itself.