A Crisis is a Terrible Thing to Waste

Win, lose or drawn-out (depending on federal court), the consolidation campaign has been good for Memphis and Shelby County.

Yes, there’s been an abundance of hyperbole, posturing and fiction, but it’s hard to remember a time in decades when as many people in Memphis and Shelby County are talking about their government.  That’s always a good thing.  At times, it may have brought out the worst in us – our attitude of scarcity, the prejudices, our paranoia and low self-esteem and the “we versus they” approaches to issues – but on the plus side, it also has changed the conversation here and created a constituency for better government that could be a badly needed force for change.

Just think, about 18 months ago when then Shelby County Mayor A C Wharton spent more than four months on his “listening tour” to talk about whether he should appoint a Metro Charter Commission, there was plenty of griping about government but no one had any ideas of how to make things better.

Back then, few people were telling, much less facing, the brutal facts about our lack of economic competitiveness.

Back then, few people knew how other cities leveraged new government to create more jobs and contain taxes.

Most of all, back then, there really weren’t many people who understood enough about government to suggest ways to make things better.

That’s all changed, and whether consolidation passes or not, the genie is out of the bottle.  With just a little leadership, which many people have pledged to provide, there will either be a constituency to drive decisions regarding the new government and to make sure all the provisions of the new charter are fully exploited or a constituency that becomes the backbone for a new better government movement.

If there’s any one thing that everyone seems to agree on – although sometimes it’s hard to tell it – is that government is a big part of the problems here.  Of course, outside Memphis, conventional wisdom is that it’s Memphis City Hall that needs to get its house in order, but it’s Shelby County that’s increased its tax rate almost 50% in the past 12 years.

It’s no secret that here we have an addiction to data, measurements and trend lines.  That’s been the best part for us about the consolidation campaign, because for the first time, people talked past the people we pay to lie to us (in the words of a prominent downtown developer) and there were facts about Shelby County that hadn’t ever gotten such wide distribution and there were new facts that will now shape future decision-making.  (The county’s small towns seemed especially shocked to learn that they follow Memphis as the cities with the highest cumulative tax rates in Tennessee.)

While most politicians tend to shirk from acknowledging negative trends, Mayor Wharton set the tone in his listening tour, presenting impolite facts comparing Memphis/Shelby County and Nashville.  The Charter Commission expanded these comparisons to include Indianapolis, Louisville and Jacksonville, which did nothing to improve the statistics.

We operate from a singular bias about the facts: You have to know them, face them honestly and acknowledge them before you can change them.  That’s why the focus on the lack of competitiveness by Shelby County and the region has been a good thing (despite pollster Berje Yacoubian – whose missed calls should cause some caution for his predictions – Fred Smith’s opinion does matter).  We now know the depths of our problems – the historic loss of income, jobs and talent that stretches back for a decade.  Pretending that these problems are less serious or that all U.S. cities are having problems belies the truth of our local dilemma.

There hasn’t been this healthy a dose of reality and the facing of the facts since the 1980-1981 Memphis Jobs Conference – convened by Tennessee Governor Lamar Alexander – spotlighted Memphis’s economic problems and set out to do something about it.  It’s easy today for the pessimism to run so deep that it leads us to believe that there’s really nothing we can do to turn things around, but the Jobs Conference is the best evidence that it can be done.

Back then, Memphis was floundering, job creation was flat, and retail flight decimated downtown while white flight fueled sprawl.  In the midst of the crisis in confidence, business leaders, working with Governor Alexander, set out to develop an agenda to jump start the Memphis economy.  Some said it could not be done.  Some politicos gave it lip service and then Memphis Mayor Wyeth Chandler roundly ignored it.

But it did indeed establish objectives like making Memphis a tourist destination and America’s distribution center.  There were some fears that we were concentrating too much on low-wage jobs, but when you’ve been knocked on the canvas, the first thing you’ve got to do is to get up.  And we proved that with a concentrated effort and shared plan, we could accomplish our goals.

So, today, our task is to climb out of the deep hole we have dug for ourselves.  Some people say we can’t do it.  Some say people who believe we can change Memphis’s trajectory are Pollyannas because the problems are too severe.   But if the best predictor of the future is the past, our own history teaches us that we do control our own destiny.

History also teaches us that we have to face the truth, the whole truth and nothing but the truth.  The consolidation campaign has now laid down the factual foundation to mount a shared agenda to move Memphis from competing with Shreveport to becoming a city to be reckoned with.   The good news these days is that unlike the days of the Jobs Conference, there is no political ambivalence to playing well with others and in setting ambitious priorities.

Already, things are moving in the right direction because political and business leaders are talking the same language.  That’s another by-product of the consolidation campaign.  The past 18 months have ushered in the vocabulary and research about the costs of comparable governments, government costs per capita, the importance of growing the revenue side of the ledger by economic growth, efficiency benchmarks, elimination of duplication and overlapping responsibilities, competitive rankings, countywide solutions, high performance economic development, economic measurements that matter and more.

Already, the consolidation campaign has sparked new discussions about functional consolidation. Unfortunately, it rarely lives up to its reputation because even when you combine all city and county employees into the same department, the department still answers to two governments that don’t always have the same vision.  That said, it’s better than doing nothing.

Finally, the consolidation movement has galvanized a group of people behind improving government.  If consolidation passes, there will be four years before it takes effect and during that time the new government will be hammered out.  If consolidation fails, we should still set a four-year deadline for executing an agenda of government reform.  We have no delusions that Germantown Mayor Sharon Goldsworthy, Bartlett Mayor and Keith McDonald and their minions are really willing to be part of it, their rhetoric about fixing the government we’ve got aside, but it can be done without them.

This reform group could set out to achieve the same goals as consolidation – cut costs of government, flatten management, right size government, create clear accountability, strengthen ethics and redistrict so legislative members are more neighborhood-based and elections are more affordable.

Because of the consolidation campaign, there’s now an activated group anxious to improve government and a sizable part of it are young Memphians weighing whether they remain in Memphis.  They are armed with the honest facts about Memphis, the truth about how we’re doing compared to other cities and motivated by the impulse to change things…and soon.

In addition, if consolidation fails, all of us should put the pressure on the politicos and politicians who fought consolidation tooth and nail to deliver something besides rhetoric about how they can improve Memphis.  It’s time to quit talking the talk and walk the walk.

As they say, a crisis is a terrible thing to waste.   Proof positive that we are in crisis is another benefit of the consolidation campaign, and here at least, it’s responsible for helping us face the honest facts.  Now that we know them, we won’t be as easily deceived in the civic and political conversations that have been so common place and we can’t continue to define success by comparing Memphis against itself. 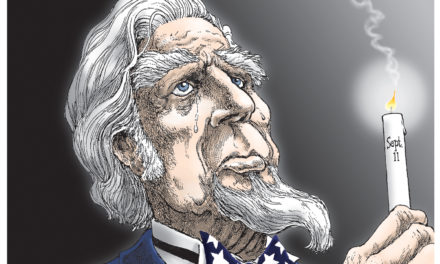 Not A Whole Lot Shaking At The Pyramid