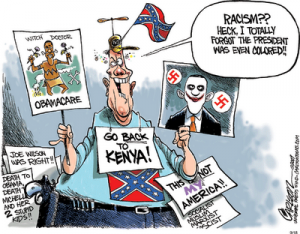 Right-wingers who wrap themselves in Christianity and patriotism are on display in full bloom again.

Tea Party leaders are as accurate as usual when they warped what the NAACP said about the group and brutalized quotations by Dr. Martin Luther King Jr.  in what they surely thought was a clever ruse to keep from saying it deplores racism.  Then again, its guru Mark Williams wrote on his blog (before he took it down): “to the trash heap of history, where they belong with all the other vile racist groups that emerged in our history,” and local leaders offered up intemperate comments before finding their balance.

Meanwhile, we can always count on Bellevue Baptist Church to defend discrimination by the spurious argument that they are fighting for “Christianity,” as if all Christians actually share their fundamentalism and the anti-intellectualism so prevalent in American life.  After all, we bet most of its members believe that the earth is 4,000 years old.  Steve Gaines, pastor of Bellevue Baptist Church, believes the City Council member Janis Fullilove’s wise ordinance against discrimination “discriminates against people of faith.”

The most amusing aspect of these pronouncements, if there is one, is when these arch-conservatives work so hard to act the victims.  In our book, anyone who would suggest that the NAACP has been a vehicle of racism is historically challenged.  Perhaps, they would prefer if its leaders had stayed in their place, so we could return to the traditional days of the Cleaver family when Jim Crow laws and literacy tests were dominant in the South.  As for Bellevue Baptist Church, the ludicrous assertion that Christians are being discriminated against is a favorite theme devoid of any historical antecedents in this country.

Being Right, not Far Right

Councilwoman Fullilove deserves a lot of credit for being on the right side of Christianity, but more to the point, she deserves credit for being on the right side of American democratic traditions when she suggested that government, in this case, city government, should represent the highest ideals and the best values of its people.  Anti-discrimination policies should be superfluous by now, but sadly, as she knows from her past and she knows from listening to others knows about the reality of sexual orientation discrimination in our city – and notably many of our churches.

The Council committee forwarded the resolution to the full Council while awaiting Memphis Mayor A C Wharton’s recommendation.  There’s little question that he’ll be on the side of fairness as well, because he said as much to the New York Times in an interview a few years ago.

The ordinance only has to do with the City of Memphis, and we think it is little to expect of people and agencies supported by public money not to discriminate against anyone.  This stops short of the much better ordinance passed in Shelby County Government that was spearheaded by Commissioner Steve Mulroy that extended the policy to companies being paid with county funds.  Hopefully, City Council will recognize the dangers of the public sector supporting discrimination in any form with the public’s money, and surely a majority African-American Council recognizes the slippery slope that bigotry creates for all of us even when it’s directed at any minority. 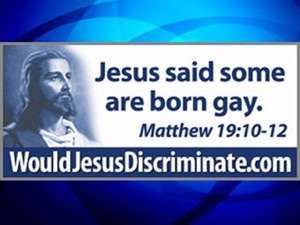 Brother Gaines and others apparently have no problem with selective discrimination – come to think of it, Southern Baptist Churches had no problem justifying discrimination against African-Americans even as the civil rights movement was under way.  So, for many of us in our demographic, we find little to commend Rev. Gaines and other megachurch leaders when they profess to act as the moral compass for the rest of us.

At a time when tolerance is a selling point for cities, a vote against the city ordinance would stake out our claim to intolerance and sanctimony. It will chill efforts to recruit young professionals and immigrants to Memphis, and make no mistake about it, the success of cities today are directly related to both.

We are at a seminal point in Memphis history. Everything matters.

Already, our economic development officials are hobbled by our reputation as a race-conscious city racked by conflict. If you add to that the need to explain why guns are needed here in parks and restaurants and why discrimination would win in a vote by our county legislators, the Chamber is left to push a large boulder up a steep hill.

We can only hope that our city elected officials do what is right. They will as long as they remember that they are public officials, not religious officials.  We live in a democracy, not a theocracy, no matter how hard the hard right wing tries to justify one.  While elected officials’ private religious beliefs are important in defining who they are, it should not define the policies of City of Memphis government.  More to the point, their votes are about our future and the chance to break from past prejudices and to reject the brand of politics that would treat some of our citizens as “less than.”

Public Debate is no Party

Meanwhile, the Tea Party stumped its collective toes when it fell into its default position that calls for it to attack rather than analyze when the NAACP asked it to renounce any bigotry held by its members.  There’s little question that a large amount of it begins with Mr. Williams,  He’s the same guy who called Muslims  “defective, tail-sprouting, tree-swinging, semi-human bipedal primates with no claim to be treated like human beings,” he called Allah a “terrorists’ monkey God,” and Barack Obama an “Indonesian Muslim turned welfare thug and a racist-in-chief.”  We’re still waiting for the Tea Party movement to denounce those hate-filled words.

So, it shouldn’t be much of a surprise that Tea Party leaders, rather than say they are against racism, took what the NAACP said and morphed into a statement that bore no resemblance to reality.   Rather than disassociate themselves from radical actions of their membership, TP leaders simply deny they exist, which leads us to wonder who’s producing all those racist signs and placards at the group’s rallies.   If they alarm us as Caucasians, imagine what they say to African-Americans in a culture with the history of ours.

Funny, for years, conservatives have trash talked liberals, demanding that they distance themselves from radicals, people who burned the flag and people who visited dictators on the State Department’s do not visit list.  Well, it’s time for them to do the same with the fringe of racists who hide under the umbrella of the Tea Party because they think it’s a safe haven for their personal lunatic leanings and racist ramblings.

Of course, the mistress of misinformation, Sarah Palin, weighed in, but instead of the simple declarative statement – I deplore racism wherever it is found – she misstated what the NAACP resolution said and played to her base, where bigots should now feel welcome.  She wrote that she was “saddened by the NAACP’s claim that patriotic Americans who stand up for the United States of America’s constitutional rights are somehow ‘racists.’”  Setting aside that the NAACP did not say all Tea Partiers are racists, her proclivity for pandering patriotic palaver has no parallel.  Here at home, local Tea Party officials came out of the chute with over-the-top comments about refusing to be “intimidated” and “political correctness.”  To their credit, they regained their balance and said “there is no room for racist views and no room for anybody that is advocating violence.”

The good thing about American democracy is its marketplace of ideas.  It may be coarse, it may be ugly and it may involve extremist opinions, but the good news is that good sense and mainstream thinking generally win out.  Maybe that’s what Tea Party leaders and Rev. Gaines are most worried about.