Skating Toward A Better Future 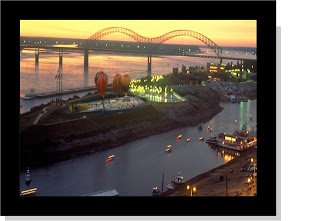 With the Mud Island Land Use Study – Phase Three Public Meetings wrapping up this week, there may be questions about the final recommendations, but there can be no questions any longer about the potential of a skate park on the Mississippi River isthmus.

There have been a lot of suggested activities for Mud Island, but it’s hard to gaze over at the generally staid river park and not imagine the beehive of activity that would be produced by a first-class skate park that is the largest in the U.S. Best of all, it would dynamite national public perceptions of a slow-moving riverfront, shaped more often by photos of riverboats and times gone by than by active, young families that speak to our future, enlivening an area desperately in need of animation and activity.

We commend the Division of Park Services for finally trying to close the skate park gap that exists between our city and its peers. According to the Trust for Public Land, the top 10 cities for skate parks have from 1 to 1.8 skate parks per 100,000 people. In other words, for Memphis to get in the top 10, we need to open up minimum of 6 skate parks and more likely 10.

That’s why plans to build a skate park in the Glenview neighborhood and as part of the proposed plans for the Fairgrounds are welcome announcements, but they do nothing to mitigate the importance of a signature venue as a downtown welcome mat for Memphis. (Your last chances to weigh in on the plan for Mud Island are Tuesday at 5:45 p.m. at Memphis Botanic Garden and Thursday at 5:45 p.m. at Harbor Landing on Mud Island.)

Getting Ahead Of The Game

Eight years ago, we were in Louisville and the mayor there wanted to show off the things that showed how serious his city was about its future. He took us to two places that he considered proof positive – the new, improved riverfront and the new skate park within a stone’s throw of the riverfront.

It was middle of a weekday and the place was alive with activity. The mayor said that it was open around the clock, and it was never empty. Most of all, it sent the message, he said, that Louisville was serious about attracting young talented workers and in creating a new, more progressive brand for itself (shortly thereafter, his fellow citizens approved the first large city-county consolidation in 40 years to punctuate his point).

The skate park had just served as the site for a nationally televised X-games competition, and the mayor was still basking in the glow of this validation of his leadership to get the facility built.

A friend of ours says that Memphis is always on the cutting edge. Unfortunately, it’s the one 20 years ago.

A Marker For Talent

In this case, we have a chance to get it right a lot earlier if we can come to grips with the wisdom of the proposed skate park on Mud Island. Clearly, in the public process run by the Riverfront Development Corporation (RDC), no group has been more passionate or armed with more facts about the impact of its project.

From where we sit, the business community ought to be leading the fight for the skate park – and the vision of the tip of Mud Island teeming with the kind of activity that we saw in Louisville. In the great scheme of things, we suggest that the presence of the skate park could pay bigger dividends than all of the big projects that we pursue in the name of “talent attraction.”

These days, any Chamber that isn’t anchoring its work in the creation, attraction and retention of talent isn’t really working on economic development. That’s why we’ve seen so many cities invest in skate parks as a convincing way to send new messages to today’s highly coveted 25-34 year-olds.

Hopefully, we won’t do what we often have done – add it after everyone else has one. It would be the outdoor recreation version of Hard Rock Café. By the time one located here, it seemed that everyone had one, but still, we acted like we had just landed an NFL team. We did, however, get an NBA team, but, come to think of it, it was after there were about three dozen of them.

At any rate, the skate park is a relatively low-cost way to do something before it’s old hat. But we need to do it now, and we need to do it in a high-profile place like Mud Island, where it sends an unequivocable message about our city, where it animates a downtown that critically needs it and where it becomes a hub of vibrancy 24/7.

In addition, we believe the Memphis Division of Park Services understands that this is not a question of either a large-scale, prominent skate park downtown or a number of smaller skate parks throughout the city. Actually, we need to be doing both. And soon.

We confidently predict that there are more skaters than golfers and tennis players, and city government provides courses and courts.

Here, we often seem so obsessed with studying and planning and less committed to implementing and executing. And an idea like the skate park on the south tip of Mud Island – a source of animation, a magnet for families, a repositioning of the park as a vibrant, dynamic hub of activity and a use that can bring all sides of the controversy over the future of our riverfront together – just seems too good to pass up.

If other cities can do it, we just don’t know why we can’t. In many other cities, there’s just a stronger predilection for action. They are simply hard-wired to take action and to do something.

In today’s highly competitive global economy and with our dire economic indicators, time is the only thing we don’t have enough of. Let’s decide on three things we need to do to compete and go do them. When we’re done, let’s pick three more and work on them. We put the Mud Island Skate Park on our first list.

Skateboarding is among the top four outdoor activities of Americans with 64 outings per participant, according to information gathered by Skatelife Memphis. Meanwhile, skaters are willing to travel 10 or more hours to their favorite skate parks, and it’s hard to imagine one destined to be more special than one located on the banks of America’s greatest river.

In number of participants, skateboarding has now passed baseball, according to the Sporting Goods Manufacturers, and Sports Illustrated has called it “the great influence on American youth culture in the 20th century.”

We’ve not met anyone in years who we admire than Dr. Aaron Shafer, the St. Jude Children’s Hospital researcher who has spearheaded this project from a personal dream to one now supported by a broad constituency. His work on the skate park is a reminder for Memphis as it tries to do better in attracting young professionals: sometimes, it’s not the mega-project, but the smaller projects – the ones generating activity and vibrancy – that offer the most immediate returns on investment with this coveted demographic.

Dr. Shafer’s diagnosis is that the skate park would go a long way to keeping people like him in Memphis, and that’s as powerful a reason for building it as we can think of. To his credit, however, Dr. Shafer’s ultimate motivation is at-risk children and his dream is for a wholesome environment where they can exercise and where a $3 million skate park can bring them into contact with role models and mentors.
In a city where consensus is about as scarce as Grizzlies’ victories, the plan for a skate park on Mud Island is about as close as it gets.

All in all, the notion of building the skate park at the southern tip of Mud Island – the geographic equivalent of the city’s toe in the water – would be a dependable source of vibrancy and a magnet for skating families. It’s as close to a no brainer as any project we’ve seen for downtown Memphis.