Voting For An Exciting Weekend Of Creativity In Memphis 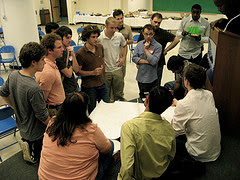 Memphis is blowing away the competition.

This time, it’s not college basketball, but the vote for a Startup Weekend.

It’s a fascinating – not to mention fun – process, because within 52 hours in one weekend, a tech start up company will be created and launched from scratch.

There are 35 cities vying to be the site for the kind of energy and creativity that often percolates just below the surface of Memphis.

When our friend Jenny Howard of MPACT Memphis tipped us off to this vote Thursday, Memphis was #5 in the balloting, but right now, it’s running away with the election with 10 times more votes than the second place city. In fact, Memphis has more votes than the rest of the cities combined.

It’s the latest encouraging indication of an enthusiastic group of Memphians who are searching for a way to connect and create. That’s certainly consistent with the purpose of Startup Weekend, which has been held previously in places like Boulder (home base for Startup Weekend), Toronto, Hamburg, New York, Boston, Chapel Hill, Atlanta, London, Seattle and San Francisco.

The weekend starts at 6 p.m. on a Friday and winds up at midnight Sunday. There is a facilitator, but there is no CEO or other titles at the event. What’s been interesting in other cities is watching natural leaders emerge and watching the camaraderie gel in ways that bring the project from an concept to fruition.

The best ways to incorporate the new company will be considered and shares will be awarded and based on the level of participation by each person.

We’re not sure what else takes place at these weekends, but there’s one thing that needs to happen for sure. Someone needs to be there taking down the names of every one who shows up, because they’re exactly the kind of people we need to get involved in the public boards and activities of our community.