This Week On Smart City: City Cycling And Sustainable Landscaping

While we’ve talked often on the show about sustainability, there are two related topics that haven’t had much attention: cycling as an alternative means of transportation and landscaping using sustainable practices.

Ben Gomberg and Randy Neufeld are cycling experts in Chicago, and they share a vision of making their city the most bike-friendly in the nation. We’ll talk to them about their progress and what other cities can learn from it. Ben is the City of Chicago’s Bicycle Coordinator. Randy is the Chief Strategy Officer for the Chicagoland Bicycle Federation.

Heather Venhaus is also our guest. An environmental designer for the Lady Bird Johnson Wildflower Center, Heather is leading the new Sustainable Sites Initiative, the landscaping profession’s attempt to catch up to LEED standards for buildings and neighborhoods.

Smart City is a syndicated, weekly hour-long public radio talk show that takes an in-depth look at urban life: the people, places, ideas and trends that affect us all. Host Carol Coletta talks with national and international public policy experts, economists, business leaders, artists, developers, planners and others on the pulse of city life for a penetrating discussion on urban issues.

Smart City is broadcast at 6 a.m. Saturday and Sundays on WKNO-FM, but it is also webcast and podcast. For the webcast, times for the broadcast in other cities and to sign up for the podcast, visit the website.

Note: We’ve received numerous emails asking about the change in the broadcast time of Smart City in Memphis. We’re extremely grateful to WKNO-FM for their instrumental role in making it possible to have this program in the first place and we will always remain so. In answer to emails, however, we did want to respond: If you would like the time moved to the later time that it previously had (as many of you have said), please contact the radio station program director. 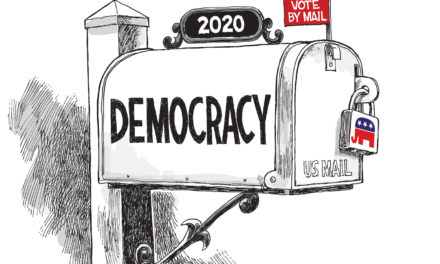 Vote By Mail, A Cartoon By Award-Winning Bill Day