Downtown’s Legacy Is Built On Neglect

We can only be grateful that Memphis Mayor Willie W. Herenton believes that his legacy is based on downtown Memphis.

With four decades of experience in the downtown core, we’ve never seen it with more trash, more poorly maintained and more in need of desperate attention.

We can only imagine what it would look like if he hadn’t cared so much.

Tonight, the mayor rolls out his anti-blight plan, which includes a strong emphasis on cleaning up Memphis. Unfortunately, while the plan does have some important new policies, the section on cleaning up the city is short on resources and long on platitudes.

While on the face of it, the announcement of the anti-blight plan would seem to have positive political impact for the mayor’s relection, it of course begs the question of where City Hall has been for 16 years as blight spread like a cancer, not to mention the potential role of the mayor in contributing to it in the first place.

And coming as it does at the end of the “decade of the neighborhood” announced so long ago, it serves as a sad punctuation for wasted time and lack of action.

As for downtown, while there is the widespread perception that it gets more than its share of City Hall attention, the truth is that it suffers from the same benign neglect as Memphis neighborhoods. Were it not for the tax incentives for development, the abdication of City Hall responsibilities would be even more stark and apparent.

That’s because the current development masks the fact that city government has essentially treated downtown Memphis like most neighborhoods – with far too little attention and precious few resources.

For example, with downtown infrastructure crumbling, City Hall notified the Center City Commission about six years ago that city government would no longer be responsible for new sidewalks. As a result, the downtown development agency cobbled together some funding that allowed it to issue – and pay for – a fraction of the bonds that are still needed to get downtown to the level of comparable cities.

If that wasn’t enough, city government has all but eliminated clean-up programs downtown and maintenance has become all but nonexistent. If city taxes aren’t supposed to be used for downtown upkeep, we can only imagine the lack of consideration that neighborhoods get.

One thing we do know: The blizzard of overblown rhetoric about downtown isn’t snowing any one who works and lives downtown.

If Mayor Herenton is serious about downtown revitalization, we respectfully suggest that he actually leave City Hall and walk downtown between City Hall and the Peabody and Westin Hotel watering holes.

If City Hall officials would get out and smell the roses – or at least the trash and the panhandlers and cope with the decrepit downtown infrastructure – at least we’d have more respect for them when the talk turns to the “renaissance” of our neighborhood.

Bioworks: Building on our Economic Strengths 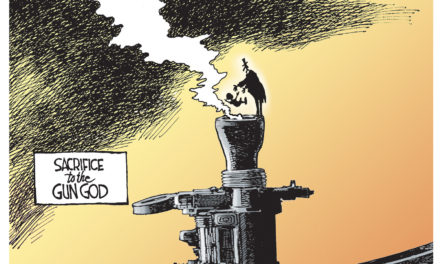 Sacrifice to the Gun God, A Cartoon by Award-Winning Bill Day