Changing The Rules Of The Game For A New Football Stadium 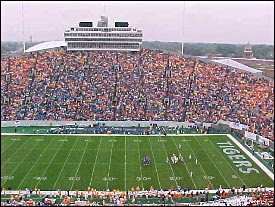 The lead and second graph in The Commercial Appeal said:

“…improvements could cost up to $20 million and mean the loss of 10,000 seats at Liberty Bowl Memorial Stadium…the findings of the study by local consultants SSR Ellers appear to back the assertion by Memphis Mayor…that the cost of ADA upgrades at the 42-year-old Liberty Bowl is too great, in dollars and in stadium capacity.”

Since the engineering study was paid for by the Herenton Administration, the real news would have been if it had reached any other conclusion.

All in all, even if the $20 million is right, it’s still light years from the estimated $150-175 million that it would cost to build the new stadium coveted by Mayor Herenton.

It’s even hard to get too worried about a loss of seats, since having a 62,380-seat stadium is akin to designing the highways in suburban Shelby County for rush hour traffic (which sadly is exactly what’s done). Capacity crowds are about as frequent in the stadium as winning seasons for University of Memphis and Top 10 ranked teams playing in the Liberty Bowl.

Despite a serious lack of enthusiasm for his proposal by his own staff, it seems clear that the mayor is in for the long haul, despite having only a mild interest in football in the first place.

We’re hard-pressed to understand why Mayor Herenton is so hellbent to get this stadium built, and our confusion is heightened by his failure to articulate a compelling justification for the project.

We look for him to mount an 11th hour push for the stadium, and drawing on past themes for projects like this, we expect him to inevitably cite the economic impact of a new stadium and the need to revitalize the Fairgrounds area.

The problem is that once these big project freight trains start rolling down the tracks, no one ever steps back to ask the more pertinent question:

If Memphis is prepared to spend about $160 million as an economic stimulus or community development vehicle, are there strategies that would produce more impact and create more lasting results?

After all, the annual bill for a project costing $160 million is about $10.5 million a year for 20-25 years. Is a football stadium the best use for these scare tax dollars?

Before that question can be pondered too much, we’re expecting the ever dependable economic impact study to be rolled out, complete with whopping numbers drawn from multipliers that defy common sense.

It’s no surprise, since these economic impact studies are only undertaken by the people pushing for the project, not by an independent third party committed to an objective reading of the facts and a thorough analysis of the options for the public funds.

In Washington, D.C., in the midst of the argument about a new stadium, that city’s government issued an impact study that said the new facility would create $100 million in new salaries. When you did the math, it meant that the jobs would pay an average of $261,111. And yet, the economic impact numbers stuck, repeated by the media and the mayor in D.C. until they were hammered into the public consciousness.

Multipliers are a central feature of these studies. They quantify the alleged ripple effect for each dollar as it is turned over in the community’s economy – for example, the money for a ticket to the Liberty Bowl goes to that organization, they spend the money to buy equipment from a local store, that store uses the money to pay local suppliers, etc.

As a result, if there is anything dependable about the studies, it is that they regularly overstate the amount of the positive contributions to the economy and confuse gross and net spending. That’s how you end up with a study like the one issued by the Memphis Regional Chamber years ago that claimed that the economic impact of the NBA would be $1 billion. Even city and county governments and Grizzlies ownership put some distance from those conclusions and told Chamber leadership to bury the study as quickly as they could.

But, worst of all, the economic impact studies act as if there’s no alternate uses for the money.

We’ve never seen one that looked at alternate uses of the same amount of public money. It’s as if there are no potential uses other than the stadium, such as health care, schools and parks, or even a tax reduction.

But it doesn’t stop there. Because it’s a football stadium, there won’t even be the same level of questions asked of other public projects. You would think that at some point, there would be some discussion about investing the public money in a way that has the biggest payoff for the city.

All of this will be accompanied by the normal rhetoric about the stadium raising civic pride and Memphis’ image across the U.S. Sometimes, it almost feels like only cities with great sports facilities can be a first tier city.

Perhaps, $160 million invested in better schools, a more vibrant riverfront, the nation’s best skatepark or a design competition for national artists could actually attract more national attention. After all, these days, who doesn’t have a stadium?

Lost in all of this is a seminal fact: most independent research concludes that sports facilities are not engines of economic growth. On balance, the research indicates that there is no impact at all.

In the end, a new stadium is a direct subsidy in a state university and two privately operated football games.

With the deterioration of the city’s infrastructure – from streets in neighborhoods to potholes in major thoroughfares to crumbling sidewalks to the decline of parks – it seems to make more sense for Memphis to invest in the improvement of its present assets. There’s a lot more chance of them having a major impact on the city’s quality of life and be the strongest weapon against continued flight of Memphians to the suburbs.

This Week On Smart City: Touching The Future Through Teaching And Planning