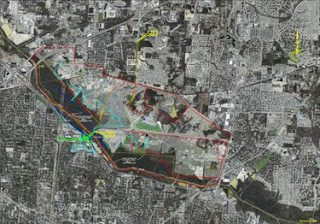 Ground zero for the clash of visions about Memphis’ future will likely take place at a future Metropolitan Planning Organization (MPO) meeting, where road priorities are set for the region.

At issue is whether the “context sensitive design” agreed upon by a special committee convened by Mayor Wharton will be approved and that the highway running northward through the park just east of the new and insensitively designed Walnut Grove Road bridge is built.

We’ve been writing for a couple of years about the Wharton approach to resolving the 25-year-old controversy, and the unexpected success of his 17-member committee – for the first time, environmentalists and developers were at the same table – in reaching a compromise that modified previous gaudy plans for a road that would permanently scar the park.

It was the first time that the context sensitive design process had been used in Shelby County, and happily, in the wake of this experiment, Shelby County Engineer Michael Oakes has enthusiastically embraced this balanced approach to designing roads that are more sensitive to their natural surroundings.

In the end, the Wharton advisory group recommended a gently curving, four-lane highway that snuggles against the western border of Shelby Farms Park as much as possible. In addition, the width of the road was reduced to four lanes with a speed limit of about 45 miles an hour.

Looking at the compromise now, it’s mind-boggling that such a common sense approach hadn’t been accepted before. But in the past, with a sprawl-minded county mayor and state transportation commissioner on loan from the roadbuilding industry, cars always won over the interests of people, and there was little reason for developers to feel that they had to consider a compromise.

The context sensitive design process had been slow to take root here, but it’s been used for years by traffic engineers across the U.S. who understand that they are in the place-making, not roadbuilding, business. The track record for road designs conceived in this process is that they manage to handle traffic needs while also reflecting a sense of place, improving the quality of design, responding to community values, encouraging communication and most of all, considering a full range of transportation options, including walking and biking.

Despite all odds and only because of his nudging, Mayor Wharton defied all predictions to the contrary and shepherded a new design through the process and presented it to the community as the answer to the long-simmering controversy about the road. While the city traffic engineer was involved in the process, albeit grudgingly, every one on the committee expected that ultimately, he would honor the process and go along with the decision.

Now, word comes from Memphis City Hall that the engineer’s office may not be through fighting for his more intrusive design with its six lanes and higher speed limits. Documents are being circulated within city government that still show the wider road and make no mention of the compromise design engineered by Mayor Wharton. Not only that, the documents refer to Walnut Grove Road being widened to six lanes and roads north of the park being built with seven lanes.

One thing is certain. When and if these recommendations are made public, the entire controversy will erupt with renewed vigor. Persons on the Wharton committee will feel betrayed, not to mention the green groups who were willing to compromise because they thought finally the city traffic engineer was willing to do the same.

We can’t say we’re totally surprised. As we wrote on January 10 (“Walnut Grove Road Construction Sends The Wrong Message About Memphis”), the thinking in City Hall is so Neanderthal that even bike lanes are seen as a radical concept. As major cities continue bold projects like adding 500 miles of bike paths in Chicago and Phoenix, the city’s attitude on road design and bike lanes runs the risk of resurrecting the old comment in a national magazine that Memphis is a backwater town.

More to the point, if there’s an attitude that reenforces unfortunate public stereotypes of government employees as indifferent to their opinions and lacking in vision, it’s the Walnut Grove Road Bridge design and the prospects of fighting yet another battle over the design of Kirby-Whitten Road.

Then again, if we have to beg to get bike lanes into Shelby Farms Park, I guess we shouldn’t be surprised that some folks would still prefer to pave it over with asphalt. These are the engineers who brought you a design so wrong-headed that in the future, bike riders pedaling east on Walnut Grove to enjoy the park won’t be able to cross the new bridge. Instead, they’ll have to take a two-mile detour to get into the park.

It is said in TDOT that all of this leaves Commissioner Gerald Nicely – the first non-roadbuilder in years to run the department and who’s brought some fresh thinking into its work – just shaking his head about all the “maddening machinations in Memphis.” As someone who’s taken a context sensitive approach to some state road projects, he and his colleagues are often just plain baffled by what appears to be just so much gamesmanship in Memphis.

What has always complicated this already complex issue even more is the fact that Shelby Farms Park is owned by Shelby County Government, and as a result, the county mayor has taken a major role in road decisions on land under his stewardship. At the same time, however, Shelby Farms Park is within the city limits of Memphis and decisions about highways are the responsibility of the city traffic engineer, not county government.

In this case, though, if it comes to a public difference of opinion, Mayor Wharton has a powerful trump card. He’s the chairman of the powerful MPO.

Hopefully, it won’t get to this point, but it’s hard to rule it out based on past behavior of the Memphis traffic engineer’s office. The stakes couldn’t be higher — there are 24-27 lanes of highways aiming directly at Shelby Farms Park unless the present engineering philosophy is changed.

Joining Hands For The Trip To The Promised Land