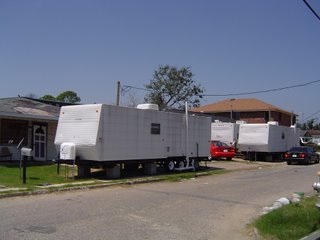 New Orleans has always been a dichotomy.

There’s always been squalor existing alongside luxury, entrenched poverty intermingled with gaudy wealth, decaying shacks just blocks from Garden District palaces, the gentility of Creole society and the “anything goes” attitude of the French Quarter.

The dichotomy is even more striking today. Upper income neighborhoods have never looked better. At times it seems that every house has a fresh coat of paint, and the neighborhoods are alive with crews cleaning up, painting and renovating houses.

St. Charles Avenue is as beautiful as ever, lined with the prettiest houses in the South and dappled in sunlight streaming through the live oaks that line the street. All that’s missing are the historic trolleys rumbling down the median, but the work on the line is promised soon. Students are teeming around Tulane and Loyola Universities, throwing Frisbees and playing touch football in Audubon Park, debating economic theories in coffee houses and giving life to the entire area. It’s testament to the power of universities to bring life to their cities and define their character.

Uptown has never been busier. Whole Foods is filled with the interesting array of people who always seem to be shopping there. New restaurants along Magazine Street have opened with spectacular results, and the boutiques, still mainly locally owned and mirroring the range of curious retail interests of the city, are busy.

Down in the French Quarter, venerable Galatoire’s – the traditional weekend lunch destination for families for generations – is half-full at 2:30 p.m. Saturday. Around the corner, Acme’s, the legendary oyster palace, has a waiting line that snakes up the block. There’s even less reason to walk down Bourbon Street than usual, with the addition of new strip clubs and sex toy shops.

The antique store owners are putting on a brave face, counting down the days until the first major convention in October, 14 months after Katrina, 14 months in which the owners have dipped into savings and hung onto the prospects of a better day. In an antique store on Chartres, the owner said his total sales for July was $27, and he’s wondering how long he can hang on.

Even the 35th Southern Decadence event – the annual Labor Day event that attracts gays from across the U.S. – seems to lack the energy of previous years. The strongest barometers of the soft tourism market are seen in two places – the string of mule-drawn carriages touring the history-laden district is down to only a few, the street performers are missing and palm and tarot card readers are few and far between.

“We’re reasonably busy,” one store owner says, “but we’re not busy with the right kind of people. We’ve got the partiers, but we’re dying without the conventions and so far the people that regularly came down to shop haven’t come back.”

Some stores are hedging their bets. Lucullus, a culinary antiques store, has opened a store in Breaux Bridge and even with the reopening of the long-time French Quarter store, there are no plans to close the other one.

Many locals complain about the stores on Canal Street that remain closed and empty, but in truth, the street looks better than Main Street in Memphis. Some businesses, like the Ritz-Carlton Hotel and Sak’s, made a business decision to re-open after the normal summer doldrums as conventions return.

There are some constants in New Orleans these days.

One year after Katrina, the city has a survivor’s pride of someone who has taken the worst that life has to offer and lived to tell the tale. And yet, it is impossible to go anywhere in the city and feel the energy that once characterized the place. In its place is a newfound seriousness born from the hard work of the past work and the reality of what remains.

Sadly, Mayor Ray Nagin is not a person who can rally the civic will and unify his people. He’s become the Hillary Clinton of Louisiana; people either love him or hate him. Whatever they think, they offer their opinions readily. That said, it’s hard to find anyone who doesn’t fault him for failing public services – whether it’s the weak water pressure caused by breaks in the pipes which are still spilling millions of gallons every day to the paucity of plans for the future development of the city.

And yet, improvements in New Orleans since March are striking. The French Quarter is cleaner than downtown Memphis, tons of trash and debris that were all over the city are gone, the tens of thousands of abandoned cars have been towed off and hundreds of collapsed buildings have been hauled away and the gray frost left by the levee mud has been replaced by grass.

It’s hard to escape the feeling that perhaps New Orleans is in truth becoming more manageable, and that it’s been right-sized, albeit against its will. The Lower 9th Ward was always squalid, and now it’s squalid and devastated. If it was impossible before to imagine why people should have to live in such conditions, it’s even harder to imagine now why the area should be rebuilt and replicate the problems that incubated there.

But it may be hard for New Orleans to summon the political will to make these hard decisions. Already, FEMA trailers dot the area, as families work hard to reinvent a bearable form of family life. The families in the trailers are a politically potent symbol that defies politicians to tell them to move or to refuse the investments to revive the neighborhood.

Sitting under an umbrella in a lawn chair outside of her trailer, one elderly woman makes her case: “Why can’t we have our homes rebuilt? No one is telling rich folks on the (Gulf) Coast that they can’t put their houses there again. No, only poor folks get told things like that. What sense is that?”

Meanwhile, in the most affluent neighborhood in Jefferson Parish, a woman stands outside of the FEMA trailer parked in her front yard. The first floor of her house is being rebuilt, but at least a third of her neighbors’ houses are marked as “tear downs.” The owners are leveling their houses and selling the lots.

Her neighborhood was flooded by the 17th Street Canal, and she and her neighbors have been told that it cannot happen again. Many are unwilling to accept the assurances. “They are taking their insurance money and moving, some to higher ground and some to other cities,” she says. “This was always a highly desirable neighborhood, so we expect the lots to sell and new homes to be built. But right now, we don’t know what’s really going to happen. It’s more of an exercise in faith than anything else.”

She says there is no one in the public sector to trust. Although her income and neighborhood would indicate support for Bush, she has nothing good to say about him. Asked what the president had to say to her in his visit a few days earlier, she said: “Nothing. Just the same old B.S. I can’t imagine how he has the gall to come down here and tell us to be optimistic. Optimism is not a plan. Where’s he been for a year? We’ve been here trying to salvage our lives.”

She segues into what she calls the “lunacy” of the FEMA trailers. According to her, the average trailer costs about $80,000 and the contractor is paid $50,000 to hook it up to electricity, water and sewer. “For $130,000, they could rebuild or repair most of the houses,” she said. “It’s just typical.”

The lack of confidence in the future and governments’ ability to influence it are seen in the “For Sales” signs that are found on every block and in every neighborhood. But all in all, drawing on three visits over the past 12 months, it’s inescapable that things are moving in the right direction.

Of course, the truth is that cities are always more resilient than anyone expects or predicts. These days, New Orleans is a city with something to prove, and little by little, it’s doing just that.

Anyone who cares about cities and how they work would find it fascinating case study. Then again, even if you don’t care about urban issues, the food and architecture are still reason enough to go.

As Older Cities Shrink, Some Reinvent Themselves

Question Of The Week: Can Memphis Encourage Creativity?

How Hardheaded Business Metrics Can Help The Hard-Core Homeless