Signs Of The Times, Hopefully 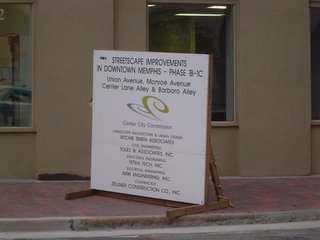 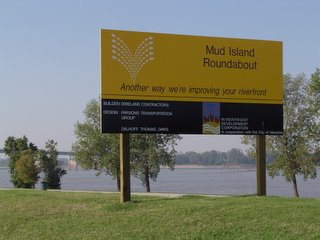 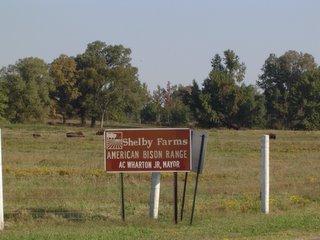 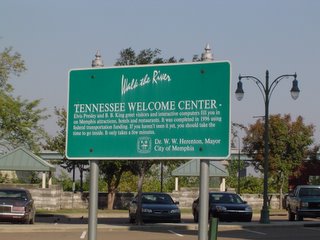 You’ll never find this in the annual reports of the Center City Commission or the Riverfront Development Corporation, but in our book, one of their most noteworthy achievements is their construction signs.

They’re the first signs we’ve seen in Memphis and Shelby County without the list of elected officials’ names that are as expected as cost overruns.

While the Center City Commission’s $4 million, long overdue sidewalk improvement project under way downtown is exciting enough, the sign for it – without the list of appointed and elected officials – is an absolute breakthrough.

(Of course, we’ve always wondered why responsibility for these sidewalks is the responsibility of the Center City Commission. It seems that the cost for them should have been included in the budget of city government, since people from all over the community will use them. But that’s a subject for another day.)

The signs of the RDC follow a similar pattern, and in fact, the agency may have pioneered these list-less signs. Today, the signs of both the Center City Commission and the Riverfront Development Corporation only list engineers, architects, etc., but no public officials

So many good things about this community start downtown, so here’s hoping the change in signs becomes a trend.

Posting their names on construction signs is a mixed blessing for elected officials anyway. There are signs posted in urban parks and along suburban roads that are obvious favorites for target practice, reminding everyone who passes what some constituents think about their elected officials.

Years ago, an exasperated county mayor wondered why he was receiving a flurry of telephone calls every day complaining about traffic snarls on Walnut Grove Road through Shelby Farms Park. A committee was formed (of course) to address the issue, particularly to determine if this was an organized effort and who was behind it. One of the first tasks was for the members of the committee to drive down Walnut Grove Road from Germantown Road to I-240. The cause wasn’t hard to find. The mayor’s name was listed on 12 different signs as motorists inched their way through the bottleneck, and since he was top of mind, he also was top of the speed dial. Within days, the number of signs bearing his name was reduced to three.

The classic example of elected officials’ affinity for putting their names on all things public is found at Shelby Farms Park. There, for more than a decade, proud county mayors have had their names in joint billing with buffaloes (see above). Close behind are the series of River Walk signs that inform people about the riverbluffs, and each bears the name of the city mayor, as if these are his musings.

A former city mayor had the brainstorm of posting neighborhood watch signs all over Memphis to warn criminals that they were under surveillance. Coincidentally, each of them would also bear his name. When the next mayor took office, he wisely didn’t bother getting his name put on each of the hundreds of signs, but simply had the former mayor’s name painted out.

Does a mayor really get votes because he’s posted his name in a park, on a welcome sign at the airport or in a public building? Based on the importance attached to sprinkling these names all over the community, it must chart the course of entire political careers.

While this attachment of one’s name is at times perplexing, most of all, it’s expensive. Before government signs, like those connected with neighborhood watch, are nailed to telephone poles all over Memphis, there ought to be a “fiscal note” calculated by the government agency, informing the public of the cost of changing all the names once a mayor leaves office.

There are encouraging signs (no pun intended) emerging in other cities. A few have actually passed policies forbidding the listing of elected officials on public signs of any kind. Then a few, notably Austin, always quirky and fun, use their road construction signs to deliver humorous messages that are guaranteed to bring a smile to motorists backed up in traffic.

As for us, we favor the simplest sign of all. No names of elected officials. No engineers’ names. Just the name of the project, its cost, and the most appropriate and accurate statement of all: Paid for by the citizens of Memphis and/or Shelby County.