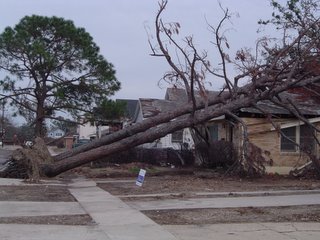 Linda, a 64-year-old teacher, is hardly the stereotype of a civic reformer. But the winds of Hurricane Katrina that swept away so much of New Orleans also swept away the lethargy that has for so long been a fundamental part of the city.

Petite, soft-spoken, impeccably dressed, Linda is the embodiment of the traditional “Louisiana lady,” except that old-fashioned Southern ladies don’t get their hands dirty with political involvement.

“I have a friend who’s a nurse and she says that New Orleans was like a boil,” she says. “Well, finally, Katrina lanced the boil. We can heal it or let the poison spread. We’ve got to do something to heal. We’re going to change things and change the future of New Orleans.”

And that’s precisely what she and thousands of others are now doing in a city where new citizens’ groups are becoming almost as prevalent as mold.

While Linda argues that New Orleans’ reputation for corruption is overstated, she has no charity when it comes to the various parish levee boards entrusted with protecting the city from flooding. “They compete for money in Baton Rouge and they compete in Washington. When we should be speaking with one voice, the levee boards fracture our political clout,” she explains with the enthusiasm that comes from the newly initiated’s involvement in a political organization that matters to them.

For Linda, this is The Citizens for One Greater New Orleans.

The group grew from an organizing meeting that Linda helped to plan to begin discussions about mobilizing a grassroots effort to create and flex political power that would influence the decisions facing their city, particularly the demolition of a political system based on insider dealings and connections. The first test: consolidation of the levees for Jefferson, Orleans, Plaquemines, St. Bernard and St. Tammany parishes into a single, regional agency.

The organizers invited their friends and neighbors: 250 people showed up, and 600 attended the follow-up meeting. Clearly, the “One Voice” movement had touched a nerve, and if there was any question about it, it was answered resoundingly when almost 50,000 people signed a petition to create a single, regional, nonpolitical levee board and the influential Business Council signed on. Finally, even the Orleans Levee Board members supported the regional oversight board whose creation would eliminate their jobs.

Linda has special equity to speak her mind. Her Metairie home was flooded, and her work with the new grassroots group seems a perfect antidote to well-justified anger and depression. Because of the group’s efforts, she and her colleagues are focused on something positive, and with their urging, legislation to consolidate the levees was introduced in the Louisiana legislature, passing the state Senate unanimously before it was narrowly defeated in the state House on a parliamentary maneuver.

“We’re demanding a special session in January, and if the Governor (Kathleen Blanco) doesn’t call it, we’re going to march on the Capitol. The governor is out of her depth, and she’s done nothing to really help us. She seems more interested in politics as usual and protecting the patronage system and existing corruption. The levee boards are packed with cronies. There’s not even an engineer or hydrologist on them. No wonder there are problems.”

While Governor Blanco initially resisted the levee legislation, she finally endorsed it, albeit tepidly, because of the passion of the new political operatives of “One Voice,” which Mayor Nagin strongly supports.

The levee boards have been the final political resting places for former state legislators, big contributors and political cronies. The governor says she has her own legislative bill, but unless it is a major overhaul of the system, look for Linda to be chained to the Capital door a few weeks from now if Blanco doesn’t call the special session.

In a city where optimism is as scarce as snow these days, grassroots groups like this one give heart to the people who remain in the decimated city and give voice to those spread across the U.S.

Besides the “One Voice” initiative, there’s dozens of others, such as Rethinking New Orleans, an informal grassroots program that has become intensified and formalized in support of historic neighborhood preservation; Friends of Frontline which is raising money to help first responders who lost their homes in the flooding; the 504 Musicians fund which is raising money to help New Orleans musicians; dozens of others, and a number of websites that are attempting to build political connections between the various organizations.

Meanwhile, there is of course a government committee – Mayor Ray Nagin’s Bring New Orleans Back Commission. If the city mayor – now rebounding in public opinion, particularly when compared to Governor Blanco – can get his committee to engage all of the new grassroots groups into his plan of action due next month, New Orleans will have taken a major step toward its rebirth.

For decades, there has been a special affinity between New Orleans and Memphis. There are the natural connections as river towns, music cities and distribution cities. But there are also the shared problems – poverty, teenage pregnancy, low per capita income and workforce weaknesses.

But there’s always been one more common characteristic – voter apathy. New Orleans is making some hopeful signs that it is finally shaking off its tradition. Here’s hoping it doesn’t take an earthquake for Memphis to do the same.

This Week On Smart City: The Greening Of San Francisco