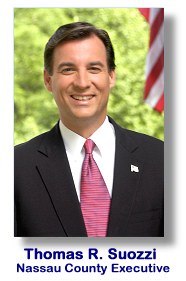 On September 14, we wrote about the “Miracle at Mineola,” spotlighting a Democratic county executive whose brand of direct leadership conquered disastrous budgetary threats and halved the portion of his budget going to pay debt service. At the time, we suggested that Shelby County officials should get a plane ticket and go learn his lessons, but in light of recent news, we think City Hall officials might want to join the county in chartering a plane to Nassau County. This week, Nassau County Executive Thomas R. Suozzi, in “bringing Nassau county back from the fiscal brink” was named by Governing magazine as Public Official of the Year, and we revisit our blog in light of this honor:

According to officials in the county finance department, the bonded indebtedness of county government is $1.7 billion. That, too, is the amount widely reported in the local media. However, $1,764,129,948 is only the principal amount.

But don’t stop there. Also add in refunded bonds that are authorized and issued. That adds $432 million in principal and projected interest of $255 million. When the defeased amount is netted out (subtracting the amount of the refunded bonds), the net amount adds $236 million to the total indebtedness.

So, when you add in this amount, it brings the total debt to $3.1 billion.

But don’t stop yet. Future debt authorized, but not yet issued, is $525 million (and that’s principal only). Add that amount, and it brings the grand total for the county’s debt to $3.6 billion, twice the amount announced so often by the county finance department administrator.

Administration officials contend that the $1.7 billion amount is the right figure, but more and more questions are being asked quietly by commissioners about the larger amount, which has been validated by the county trustee, AKA, the “county’s banker.” For now, the questions are asked sotto voce, but as the campaign season nears, the bond “big picture” will undoubtedly take center stage in some heated political debates.

As candidates look ahead to the campaign season, they might want to book a trip to Nassau County, New York, site of one of the nation’s most impressive financial turnarounds. There, new county executive Thomas R. Suozzi came into office in 2001 saddled with $2.4 billion in debt left by his predecessor and with 23 percent of county expenditures going to pay debt service. Not to mention the small matter of the $178 million budget deficit.

Vowing to bring order to the county’s finances, Suozzi began work from his first day in office, using all of his charms and rhetorical skills to inspire the public to support an era of sacrifice to bring order to county budgets. Suozzi never shirked from making the tough decisions, drawing a line in the sands and never looking back. Resisting the temptation to name committees and appoint task forces to study the issue, and not coincidentally, to give himself political cover, he instead took on all comers, including state and federal governments, in his campaign for county solvency.

A few weeks ago, Suozzi presented his third straight budget with a tax freeze. Meanwhile, Nassau County received its 10th credit rating upgrade to A, and no state or local government in the U.S. has received more. To top it off, he built a “rainy day fund” of $100 million.

Of course, it wasn’t painless. In bringing order to the county’s finances, the Nassau County executive cut his workforce by more than 1,000 jobs, bringing it to its lowest level in 30 years; he saved more than $100 million in efficiencies and reforms; he cut borrowing in half and eliminated temporary borrowing; and most of all, he brought the ballooning debt under control.

Sharing the credit is an innovative independent board, the Nassau Interim Finance Authority, which was created as a temporary financing mechanism to produce short-term relief to Nassau County through lower interest costs, debt restructuring and enhanced debt issuance flexibility

Members of the Authority pointed to the county’s “reliance on debt” as the reason that rating agencies warned investors that Nassau County’s ability to repay its debt was questionable. The involvement of the authority brought transparency to public finances, revealing that in a six-year period when the inflation rate grew 16 percent, county spending increased 72.3 percent.

In presenting his recent budget, County Executive Suozzi made a pronouncement, “The fiscal crisis is over. No longer do we convene in crisis to contemplate our county government’s most imminent threat to our survival.”

Finding out how that’s done is certainly worth a few airplane tickets to Mineola.

Question Of The Week: What Memphis Can Do To Attract And Retain Young People