Pondering the Imponderables and More 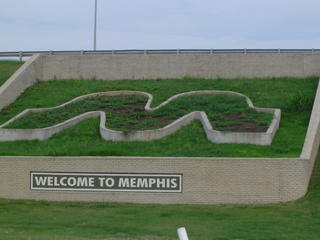  For those who asked about the weedy welcome mat at Memphis International Airport, here’s a photo of what the “flower bed” that was supposed to greet our guests actually looks like these days.

 Let’s tell the truth. Hollywood doesn’t know what to make of Craig Brewer. It’s not about the kind of movie he made. It’s about the kind of person that he is. The candor, the lack of guile, the belief in the power of redemption and the way that he is so unapologetically defined by his Southern roots — these are qualities that naturally make many people in Hollywood uneasy. They are also what make him so special to those of us who are also addicted to this strange, addictive culture that we call Memphis.

I’ve only met Craig Brewer once. We were both eating at Saigon Le and were introduced by a mutual friend. It’s the only time I’ve ever met him. But then again, I didn’t really need to. I already knew all I needed to know about him, because I knew about his birthright. I went to high school with his late father and I have known his grandparents for 40 years. Both are the kind of people who nurture and inspire you to reach for your dreams, and who never tell you that you can’t do it. That’s why Craig had his grandmother, in her wheelchair, at the Memphis’ premiere of “Hustle and Flow.”

His father, Walter, died way too young, and Craig refers often to how his father kept urging him on. Eventually, Craig returned to Collierville and lived in his grandparents’ house. His grandfather died way too early also. He had fought valiantly for his country and had won every award and ribbon for courage that the military has to give. He was totally disabled from his war duty, but despite the best efforts of Tennessee leaders like Sen. Albert Gore Jr., the government would never change its preliminary evaluation to the contrary. And yet, he never complained about his country and fought his way through numerous physical hurdles. So, Craig Brewer knows about the power of dreams and the power of role models, because he had the best of both.

 Are we the only ones who find “life style malls” the height of irony? Here we are in the 21st century and guess what? The most popular shopping experience these days is one that replicates the feeling of an urban shopping area, the exact kind of shopping experience that malls killed off in the first place.

 Investigators have now followed their wide “Tennessee Waltz” investigation into the FedEx Forum. Their particular interest is in selection of the $250 million project’s minority business consultants and minority contractors.

 Craig Brewer’s not the only local talent getting Hollywood attention these days. Former Germantown High School student Missi Pyle is winning good reviews on her supporting role in Charlie and the Chocolate Factory. Her drama inspiration was sparked at the Poplar Pike Playhouse, GHS’ award-winning arts department, whose other alumni include Chris Parnell of Saturday Night Life and Wes Day of Blue Man Group.

 Now that “Black Snake Moan” is being filmed entirely in Memphis, due only to the aforementioned Craig Brewer’s personal intervention, isn’t it time for the Bredesen Administration and the General Assembly to listen to Memphis and Shelby County Film Commissioner Linn Sitler’s well-reasoned proposal for incentives for film productions? Tennessee is being beaten badly in the race for these economic generators.

We can’t even count on a homey like Craig Brewer to be willing to pay a premium ($800,000 for “Black Snake Moan”) for the pleasure of filming in his hometown. To give an idea of how uncompetitive Tennessee is these days, remember when John Grisham’s plots revolved around Memphis and the film versions were shot here. Well, as soon as he changed locations in the books, despite the track record and the praise for Memphis, we couldn’t compete with the checks being handed out by other states.

It’s time to get serious about film-making in Tennessee. And that means getting competitive. And speaking of Memphis getting its best return on its investment, has it ever invested public funding better than in Ms. Sitler and her colleagues at the Commission? Without fanfare and fat salaries, they deliver. Imagine what they could do with a little support from Nashville.

 In response to yesterdays’ blog, we received an email asking for the amount of the increase in the district attorney general’s budget: it doubled over a seven-year period.

 Did you ever notice that the people who put notes on the message boards outside their churches that say: “The Bible is the map, and Jesus is the guide” would think it is sacrilege for you to agree with the statement if you don’t agree with their interpretations and their politics?

 It might be time to take down the billboard just north of the Grenada exit on I-55. It urges drivers to visit the “Masters of Florence,” the Wonders exhibition in 2004. It’s not too late to see this year’s outstanding exhibition on the cultural impact of Harley Davidson motorcycles.

 Now that the move of WKNO to Germantown is apparently dead, is there anybody who’ll put together a proposal for it to locate where it belongs – downtown Memphis. If they want to see how it can be done right, just visit Louisville where its station animates a downtown downtown near its historic grand hotel.

 Do you ever wonder when the Center City Commission tacks the ubiquitous “$2 billion development” to quotes in its news releases, what period of time is it talking about? Was the $2 billion recorded in the past two years or the past 20?

Putting A Price On The Suburban Commute