Memphis Makes You Feel So Good 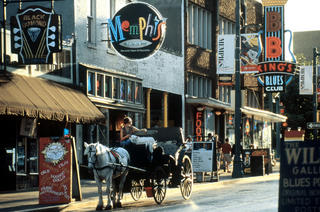 I did something today that I’ve never done before in my 35 years of working downtown. I felt “cool.”

About 2:30 this afternoon, fighting a losing battle with a big-time case of writer’s block, I grabbed up the stake of papers that was the source of my aggravation, and I decided maybe a change of scenery would help.

With file in hand, I walked to Beale Street. Actually to Blues City Cafe on Beale Street. There, I commanded a table facing the door. After ordering my drink (soft) and my plate of catfish, I returned my attention to the papers, which I spread all over the table.

There was the persistent backbeat of Memphis soul and Sun music, as fresh today as it was decades ago when it was recorded. It was the spark. Suddenly, the words began to flow. I stayed there for about 90 minutes and by then, I had all that I needed, and in addition, I had struck up conversations with a number of tourists who were interested in knowing what I was doing and for my advice on what to see since I was a “real” Memphian.

It was with a satisfying feeling that I strolled…slowly…back to the office, but with a resolve to try this again. Soon.

Amazon Looking to Chattanooga for 1,400 Jobs

This Week On Smart City: Connecting Through Technology

The Legacy Of Thomas Boggs

Strategic Thinking For Cities: This Week On Smart City